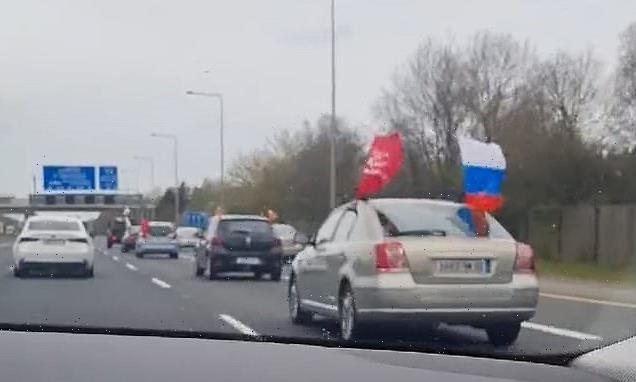 A convoy of cars waving Russian flags marked with the pro-war Z symbol have been spotted in Ireland, with the Ukrainian embassy slamming the ‘disgusting disrespect’ against the ‘Irish people who stand against Russia’s war on Ukraine’.

Pro-Russia protesters rallied on Irish roads over the weekend, with a line of cars spotted on the M50, in Dublin, Ireland’s busiest motorway, with huge Russian flags waving from the windows.

Some of the cars had various other flags on display, with others having the letter ‘Z’ written across the windows.

Pro-Putin politicians, activists, and influencers have been spotted wearing clothes and badges with the letter ‘Z’ on to show their support for the invasion of Ukraine.

The insignia, which is Latin script, has been seen on Russian tanks and military vehicles coming into Ukraine and become a symbol of the invasion.

The Embassy for Ukraine in Ireland slammed the pro-Russian move on Twitter, writing: ‘It’s absolutely disgusting that these russians living in Ireland demonstrate their complete disrespect for country of residence and the Irish people who stand against Russia’s war in Ukraine.

‘“Z”, the symbol of killings & atrocities, must be prohibited by law in every democratic state.’

It is understood that the fleet of vehicles started the organised rally from Maldron Hotel at Dublin Airport on Sunday afternoon.

Some of the cars were spotted flying the Irish tricolour alongside the Russian insignia, with users condemning the two being put side by side.

Cathal Kavanagh replied to the Embassy’s tweet: ‘They fly the tricolour in unison with the flag that conducts genocide in Ukraine. Get t’f***.’

Another said: ‘Absolutely disgusting to see our tricolour displayed with the ‘Z’ symbol.

‘What a pathetic limp show of force by Putins Puppets. The Irish People have shown who they stand beside Slava Ukraini!’

Gill Berry added: ‘No Irish flag should be flying here. This is a horrendous act.’ 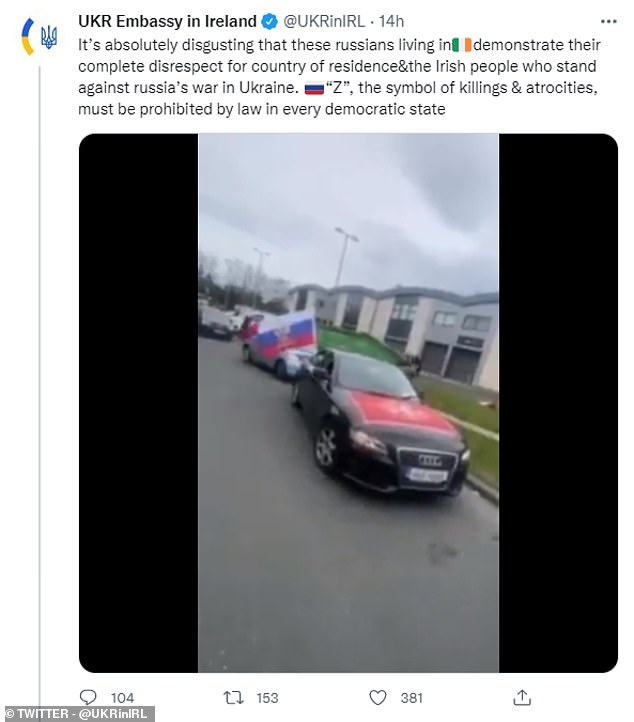 A convoy of cars waving Russian flags marked with the pro-war Z symbol have been spotted in Ireland, with the Ukrainian embassy slamming the ‘disgusting disrespect’ against the ‘Irish people who stand against Russia’s war on Ukraine’. The Embassy for Ukraine in Ireland slammed the pro-Russian move on Twitter

A similar rally also took place in Germany on Sunday, with the country’s significant Russian-speaking population demanding an end to the discrimination it says it has suffered since war began in Ukraine.

Approximately 600 demonstrators staged a car convoy in the northern city of Hanover following an appeal by the Russian-speaking community, local police told AFP, while 200 people took part in a rally in Osnabruck, northwest Germany.

A counter-demonstration in the city under the banner ‘Support Ukraine!’ attracted 3,500 people, according to police.

Protests were also held on Saturday in Stuttgart and in the northern city of Lubeck, where around 150 people took part.

Lubeck police said they had stopped a convoy of around 60 vehicles because it broke the law by expressing support for ‘Russia’s war of aggression against Ukraine’ and using ‘banned symbols’.

Authorities fear the protests could be used to promote Moscow’s war narrative and import the conflict into Germany.

Police have recorded 383 anti-Russian offences and 181 anti-Ukrainian offences since the Kremlin’s invasion started on February 24.

Around 800 people descended on financial hub Frankfurt Sunday, police said, amid a sea of Russian flags to protest ‘against hatred and harassment’. There was a heavy police presence.

The protesters were outnumbered by 2,500 people taking part in a counter-demonstration in support of Ukraine.

‘I came here because I support peace,’ Ozan Yilmaz, 24, a pro-Russian protester said.

‘Children are beaten at school because they speak Russian, that’s not acceptable.’

Sebastian, 25, was also in the pro-Russia crowd. He said: ‘The war didn’t start this year. It has been going on since 2014 and so I find that speaking of an attack against Ukraine by Russia is not really appropriate.’

Police threw up a large cordon to separate the protesters – marching behind a banner that read ‘Truth and diversity of opinion over PROPAGANDA’ – from a pro-Ukraine counter-demonstration near the city’s central banking district.

Germany is home to 1.2 million people of Russian origin and 325,000 from Ukraine.

Ukraine’s ambassador to Germany, Andriy Melnyk, strongly opposed the green light given by German authorities to the protests, describing it as a ‘huge shame’ for the country. 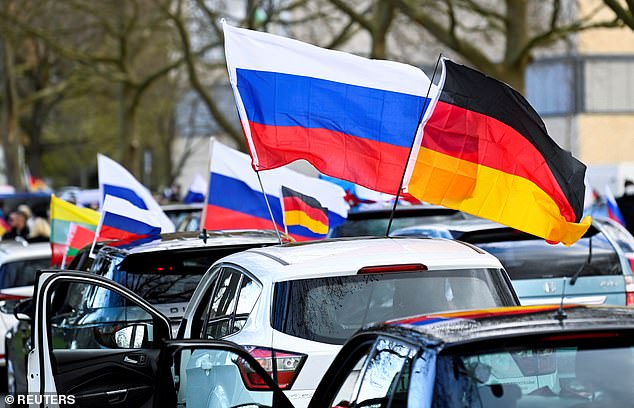 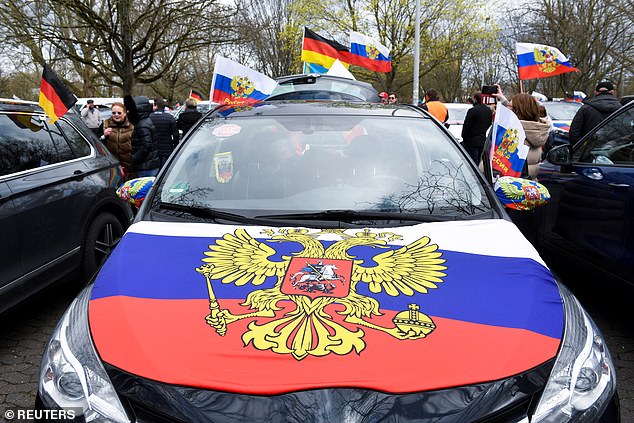 In Hanover, approximately 350 cars took part in a pro-Russian demonstration, with other demonstrations taking place in Frankfurt and Berlin

Melnyk also said it was a ‘declaration of failure’ for the government’s policy, which he viewed as ambivalent towards Moscow.

Attacks on the Russian community in Germany have spiked since the start of the war in Ukraine.

But the demos have sparked a backlash, with many interpreting them as a show of support for Russia’s military aggression in Ukraine.

Christian Freier, 40, has been sent hundreds of death threats a day since helping to organise a 400-strong vehicle convoy in Berlin two weeks ago, along with images of burnt and mutilated corpses.

The website of his car repair shop was hacked and his online ratings have plummeted.

‘My life is hell,’ said Freier, who has both Russian and German citizenship.

The demonstration was largely peaceful and apolitical, though one woman was arrested for displaying the letter ‘Z’, a symbol of support for the Russian army and now banned in Berlin.

‘My aim was only to protest against the daily aggression suffered by Russians in Germany,’ Freier said, declining to answer any questions about the conflict itself.

Since Russia invaded Ukraine in February, 383 anti-Russian and 181 anti-Ukrainian crimes have been officially reported to German police.

Germany is home to around 1.2 million Russians and 325,000 Ukrainians, plus more than 316,000 who have arrived as refugees since the start of the conflict.

‘All war is awful and can never be justified,’ said Rene Hermann, 50, who also helped to organise the Berlin convoy.

Hermann said he has ‘no position’ on the Ukraine conflict, but also runs a TikTok page with thousands of subscribers, which was recently suspended after repeatedly spreading pro-Kremlin propaganda, including allegations that Kyiv had staged a massacre ‘to manipulate Western thinking’.

‘The motives for taking part in these demonstrations are very diverse,’ said Jochen Toepfer, a sociologist at the Otto-von-Guericke University in Magdeburg and an expert on Russian society.

‘They were organised as demonstrations against discrimination in Germany. But there were certainly also fans of Putin, as well as people who don’t necessarily like Putin but don’t want to see their country discredited, despite the war,’ he said.

Though it was billed as apolitical, the Berlin demo provoked a wave of indignation in Germany, with the Bild daily calling it a ‘parade of shame’.