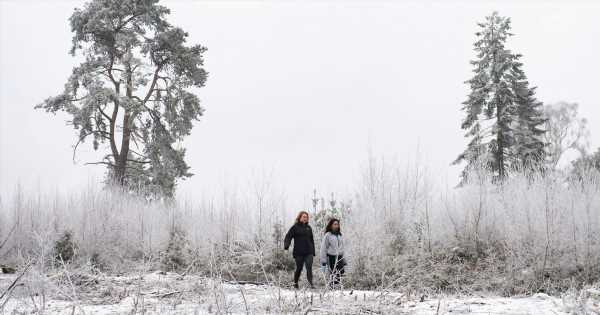 Temperatures are set to plunge to -2C across parts of Britain following a blanket of more snow as well as heavy rain predicted.

Officials at The Met Office have issued several yellow weather warnings as the Beast from the East descends upon the UK bringing chilling arctic winds and temperatures.

It's believed that around 60mm of rain is set to fall on higher grounds until 6pm this evening, with a snow warning in place until 8pm – with meteorologists believing that some parts of the country will see 10cm.

Forecasters claim that we are "on the cusp" of a severe cold front.

There is also a risk of heavy rain and melting snow that is expected to see parts of Scotland facing floods and disruption.

However, despite the blistering cold temperatures, later in the day it is estimated that the mercury will reach around 10C, despite there being a risk of frost and ice across vast parts of the country.

Rain is expected to continue sweeping north throughout the day while parts of the north will see a sprinkling of snow from 3pm onwards.

BBC meteorologist Stav Danaos said: "As we head through Monday night it stays quite wet and cloudy for much of the country, but the colder drier air across the north will start to push southwards,

"Here there'll be a few wintry showers by the time we start Tuesday," reports The Mirror.

However, charts from The Met Office show that rain, sleet and snow will all push across Scotland on Tuesday with a brighter forecast following on from the cold downpours.

He went on to say: "Fog, ice and in some places, snow are the enemies of drivers.

"In order to avoid falling foul of the conditions, it's important for motorists to adjust their driving style to suit the conditions.

"Being gentler on the throttle and brakes, slowing down particularly on rural or un-gritted routes can help ensure a safe and trouble-free journey."