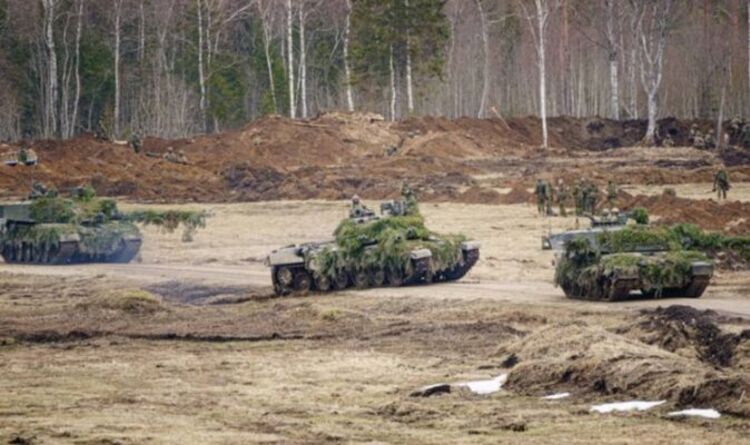 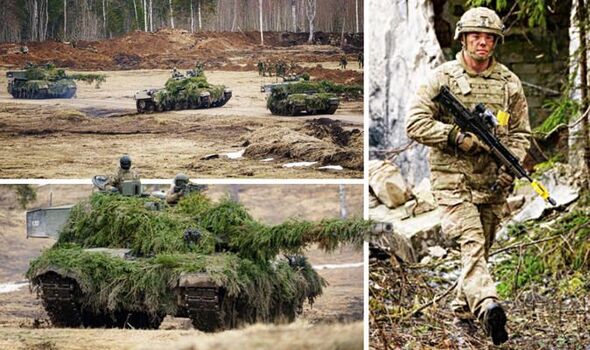 Around 1,600 British troops from the 1st Battalion, the Royal Welsh, are currently in Estonia as part of the NATO battlegroup deployed to protect the country which shares a 183-mile border with Russia.

Military chiefs are also able to call on around 30 Challenger II battle tanks and 60 armoured vehicles from the Royal Tank Regiment.

And Lieutenant Colonel Ru Streatfeild, who commands the NATO battle group, said his troops are “100 per cent” ready if Vladimir Putin ordered an invasion of Estonia, adding “our soldiers are immensely proud to be here”.

But it is an “immense responsibility”, he said, adding that he knows his battle plan in the event of a Russian attack.

British squaddies declared their very high level of training could be a decisive factor on the battlefield, adding: “You could have all the kit in the world, but if you are not confident using it, it’s not going to get you anywhere is it?”

The Daily Express yesterday joined British troops on the frontline in Estonia as they trained alongside Danish and French colleagues.

The Western allies were practicing attacking a target on two-axis, while the Estonian troops defended the position.

An RAF typhoon flew overhead moments before Britain’s Challenger II battle tanks fired on targets in a bid to secure their position.

Estonian officials have told the Daily Express they “must assume” Vladimir Putin will one day invade their country.

And Lt Col Streatfeild admitted Nato troops must be ready to fight.

Asked if Nato forces were prepared in the event of a Russian invasion, he said: “100 per cent. There is swagger. They are on their game and they are ready. Their bags are packed.

“It is not that people revel in this. But soldiers want to do a job. They want to put their tradecraft into practice.

“If you go around now and speak to soldiers, they are buzzing.

“This is what they join the Army to do.

“Our soldiers are immensely proud to be here. It is an immense privilege. But it is also an immense responsibility.”

Describing his mission, the British commander said: “It is to defend. It is a really easy word to say, but really complex job to do.”

The battle group commander said he “absolutely” knows how he would counter a Russian invasion, adding: “We are getting to know this terrain really well.

“The training area and the ground we would be defending on has a lot of complexity. But it is a complexity we can use to our advantage. And for the Estonians, this is their terrain.

“They’ve defended it before and they will defend it again.

“The terrain is very, very boggy.”

Talking about the ambush tactics used by the Ukrainians and the potential lessons NATO allies could utilise, Lt Col Streatfeild said: “There’s nothing new, really. What you are seeing around here is what we call combined arms manoeuvre.

“This is where we have tanks, armoured infantry, engineers, artillery and logistics all operating together.

“Whether it be an attack, or defence, you want to be able to bring as much of your firepower to bear from as far away as possible.

“It’s like having notes on a piano. Just one note by itself is not a defined tune. It is how you play it and bring it all together.

“That is what war fighting, building a combined arms battle group, is all about.

“Any scenario that you go into, in any sort of war fighting, even in defensive postures, it is a battle of wills.

“So a lot of this is about protecting your own vulnerabilities and trying to exploit theirs”.

Families of British troops in the battleground were initially quite nervous about the deployment.

But the NATO commander revealed: “Some of the families took time to understand our role because deterrence is such a critical part of not just security here in Estonia, but is part of security of Western liberal values and all sorts of stuff that we take for granted.

“But once they understood that being here, as part of NATO is contributing towards that, I think people were quite settled.

“I have a unit welfare officer who is working very hard at the moment, keeping all the families together.

“I think there is concern, but nowadays, it is so easy to stay in contact with families. So once they know they are out here and established and enter a rhythm, I think a lot of the anxiety is settled.

“We are literally under NATO command right now. There are NATO plans in place, and whatever orders we are given under a NATO structure, we will execute them.”

Gunner Joe Watson, who joined the Army at 16, said: said: “It doesn’t really concern me. We did join the Army for a reason. You have always got to be prepared for it.”

The 19-year-old, from Wakefield, continued: “As a Gunner, you don’t really think about it. You just do your job and try to do it well.

“There is some frustration [that British troops cannot help Ukraine in the battlefield. Every soldier wants to go to war. When you sign up, you have got to understand that. If we do go, it will be for a reason. Everyone understands that.

“Everyone understands that if we do go, it will be big.

“But we are focusing on defending Estonia. That is exactly what this is.

“I am proud to be here. I think a lot of the Estonians are very grateful that lots of the British Army are here, especially the armoured units. And this makes you quite proud to be in this job.

“I’ve got quite a small family, they are dealing with it quite well. My dad is obviously quite proud. They are all quite proud to be fair.

“This is what the British Army is all about, not even having the best kit. But we have the best trained soldiers. Nobody is as well trained as us.”

Asked if the training British troops receive could make the difference in a war, Gunner Watson added: “100 per cent. You could have all the kit in the world, but if you are not confident using it, it’s not going to get you anywhere is it?”

Lance Corporal Rhydian Stephens, from Ammanford, who is attached to the Royal Welsh as a B-company medic said: “We heard the news about the war when we were out doing training exercises in Germany and obviously people got excited. It’s what we joined the army to do.

“We joined the army to help.

“But for now we’re just watching what’s happening at the moment on the news and doing what we need to do here in Estonia first.”

14/04/2022 World News Comments Off on British troops prepare to face down Putin’s army as 1,600 assemble ‘Ready for anything’
Markets