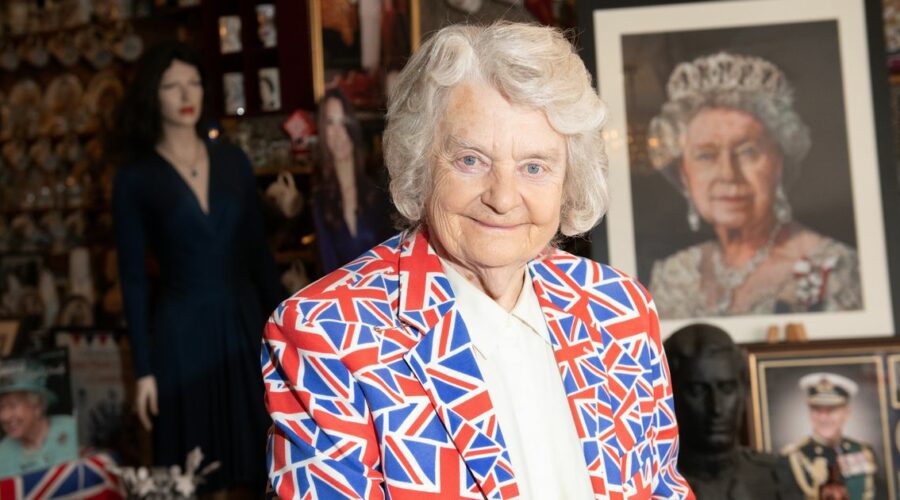 Britain’s biggest royal superfan is celebrating the Queen's Platinum Jubilee in her very own ‘Jubilee Room’.

Grandmother Margaret Tyler, 78, has filled her house with so much memorabilia dedicated to the Queen’s reign that passers-by mistake it for a museum.

Margaret from Wembley, north London, has met the Queen four times and has an entire room exclusively for the Queen’s jubilees.

Various memorabilia, photographs and books about the Royals adorn the room from the floor through to the ceiling and said it was there where she would be marking 70 years on the throne for the Queen.

This came just days after Margaret celebrated her own 78th birthday in a Royal memorabilia shop hunting for more treasures – even though her house is already full to the brim with her supersized collection.

Margaret, who has four adult children and four grandchildren, said: "I hope Her Majesty enjoyed her day – it's an amazing thing she has been doing for all these years.

"Whenever anything has happened, the Queen has always been there for us and gets us through it, even though she has a lot on her own shoulders at the moment!

"I have met her four times and my legs were like jelly after meeting her each time – she was always so kind and sweet.

"The most recent time, I ran all the way home to tell my daughter on the phone. I was puffing and panting so hard, she thought I was having a heart attack!"

For more than four decades, Margaret has been decorating her home with every picture, trinket and piece of memorabilia imaginable.

She owns hundreds of books and pictures, as well as some more obscure items – such as cardboard cutouts of Her Majesty and the Royal corgis.

Margaret admits she has no plans of slowing down her royal obsession, let alone sell anything.

She said: "My collection of memorabilia keeps growing but I'll never sell anything even though the house is bulging at the moment.

"My house is like a museum – people have even knocked on the door to ask what time we open – someone even asked if I am a member of the Royal Family myself!

"It's just what I do – I think about the Royals all the time and I'll talk about the Queen to anyone who will listen."

Margaret grew up a single child alongside two royalist parents, and said she began to adopt her love for the British monarchy from a young age.

She was just eight when Queen Elizabeth II was first coronated – and recalled being "broken-hearted" when her father wouldn't buy a TV so she could watch.