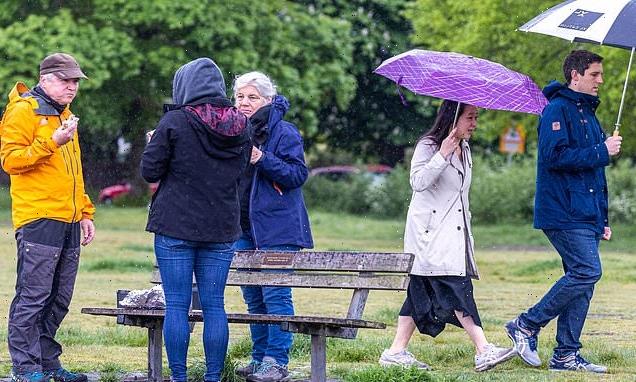 With this weekend being the last before the Covid-19 ban on going inside other people’s homes is lifted, Britons will be hoping for some dry weather to enjoy seeing friends and families in parks.

But there is set to be disappointment across the country with showers expected over Saturday and Sunday along with highs of just 59F (15C) in England, 55F (13C) in Scotland and hail and thunderstorms also possible.

And the wet conditions are set to last into next Monday and the rest of the week – although at least by then indoor attractions and hospitality will have reopened, allowing people to enjoy meeting others out of the rain. 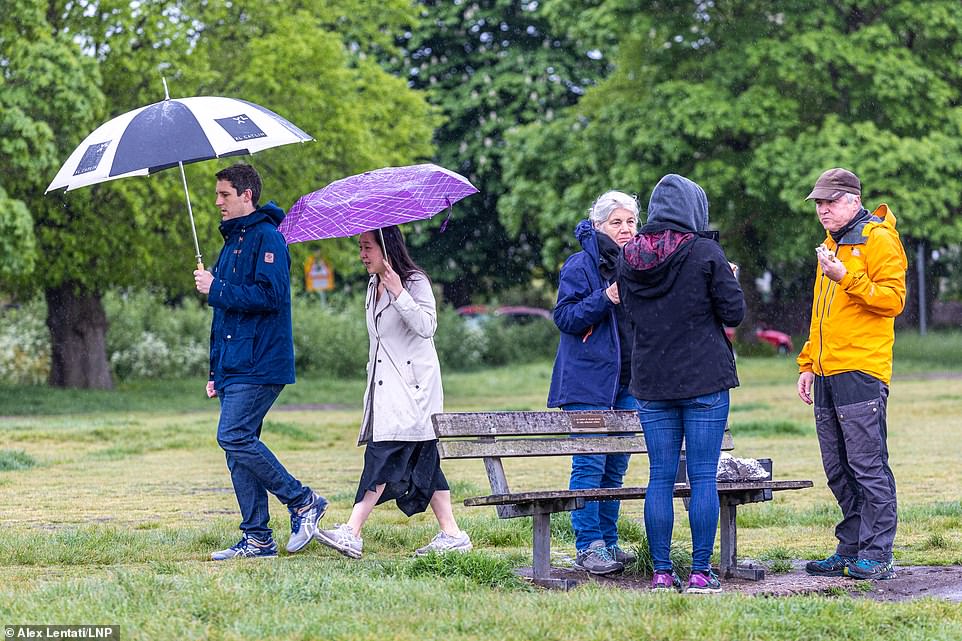 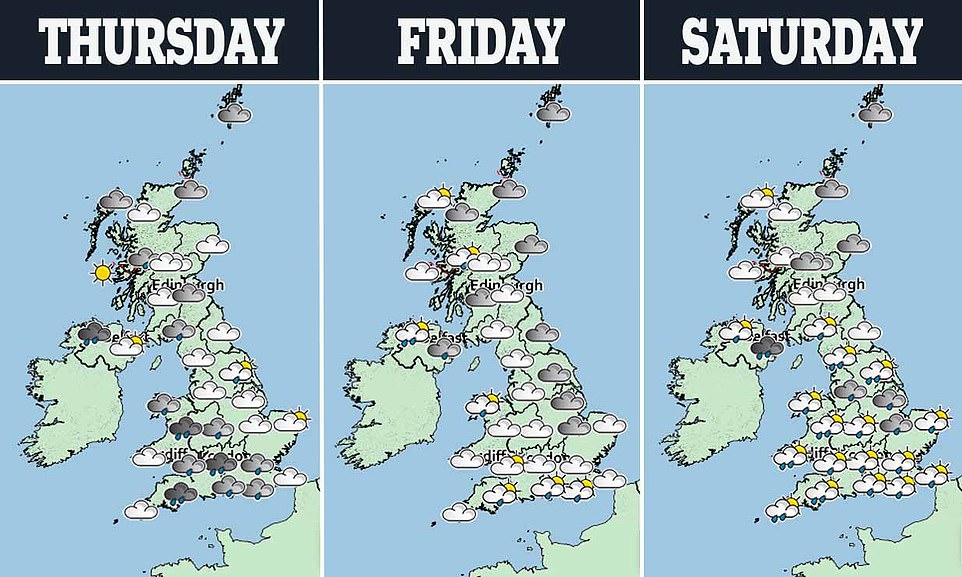 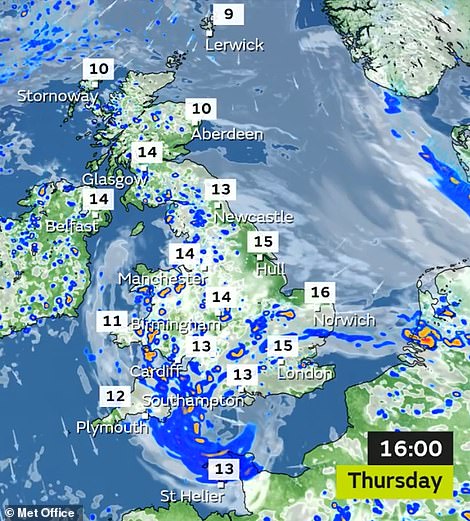 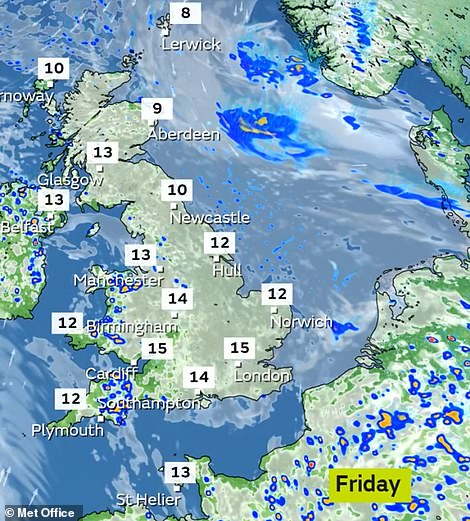 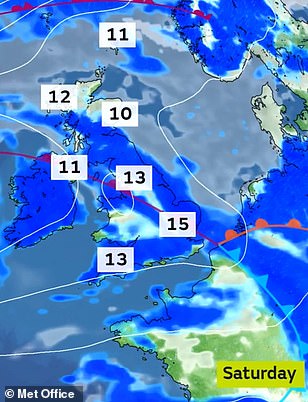 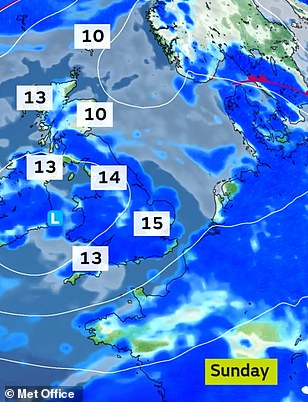 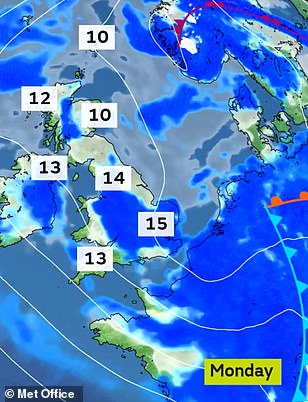 Met Office meteorologist Aidan McGivern said: ‘Basically, sunny spells and showers during the next ten days – that effectively sums things up, but at times there will be longer spells of rain.

‘If that all sounds familiar, it’s because it’s the same weather we’ve experienced through May so far. The reason? High pressure over Greenland… pushing the jet stream further south over the Atlantic.

Killed by lightning: Boy, 9, dies in front of father at football coaching as sudden storm sweeps in 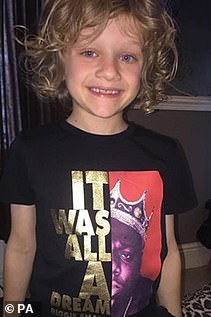 A boy of nine was killed in front of his stepfather by a bolt of lightning that ‘came out of nowhere’ during a football coaching session.

Jordan Banks, who was hailed by his club as ‘an inspiration to everyone that he met’, was having one-to-one training on Tuesday afternoon. He was struck shortly after 5pm. Paramedics and an air ambulance were sent to the playing fields in Blackpool, but Jordan died in hospital.

Jordan, who played for Clifton Rangers under-nine ‘Bees’ side, was receiving extra coaching on council-owned pitches as Mr Begg watched from his car.

According to the Met Office some 2,400 bolts hit the country over the course of the day.

Stephen Hitchen, who manages another of the club’s under-nine teams, said: ‘The weather came in so fast, it went so dark, so quickly, and then there was a big flash and a bang. The lightning came out of nowhere.’

According to the Royal Society for the Prevention of Accidents, up to 50 Britons are struck by lightning every year with, on average, two or three deaths.

‘That south-shifted jet stream will continue to pick up areas of low pressure above the Atlantic and send them towards the UK.

‘Now, the UK is not only on the cool side of the jet stream but we’re often in a dip of the jet stream known as an “upper trough” and that means that when these low pressure systems arrive, they start to mill around – they get stuck over the UK, and the initial rain that they bring just degenerates into days and days of showers, before the next low comes along to replace it.’

Today will be generally overcast and cloudy with outbreaks of rain across southern and central England and Wales – and elsewhere scattered showers will develop with some turning locally heavy and thundery.

South West England will remain largely dry and bright with sunny spells expected, while daytime showers in other places will ease and clear later on and tonight will be mostly dry but cloudy with patches of mist forming.

Mr McGivern said: ‘On Thursday, there’ll be some persistent rain across Wales and southern England. Eventually the rain tends to ease itself south-westwards and it’s replaced by showers.

‘Showers break out fairly widely elsewhere, interspersed by some sunshine, the driest weather along the North Sea coast. Some mist and low cloud for north east Scotland, where it will feel cool.

‘A risk of thunderstorms for Northern Ireland. Mid-teens where we do get some sunshine but there won’t be a tremendous amount of sunshine on Thursday.’

Spells of rain and showers will linger across southern and South East England by dawn tomorrow, with the day set to be cloudy but largely dry. There is however a chance of some showers developing during the day.

This rain will be most frequent across Northern Ireland, Wales and South West England before spreading north-eastwards during the evening, although the showers will be generally light.

Speaking about tomorrow, Mr McGivern said: ‘It is looking considerably drier with showers mostly confined to Northern Ireland, Wales and the South West – and thunderstorms are much less likely. Mostly dry to the North and the East, still feeling cool with that wind coming in from the North for northern Scotland.’ 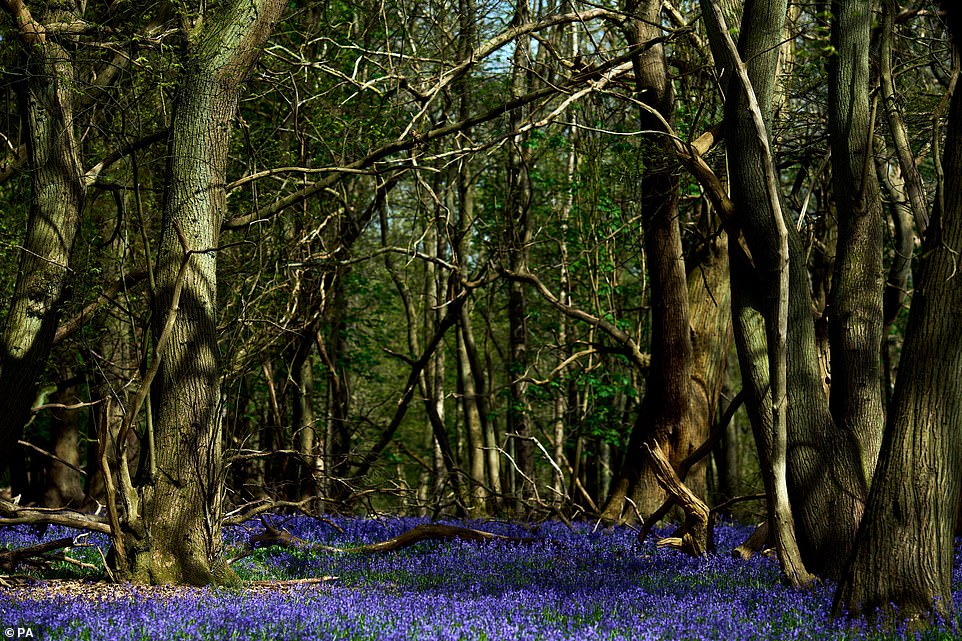 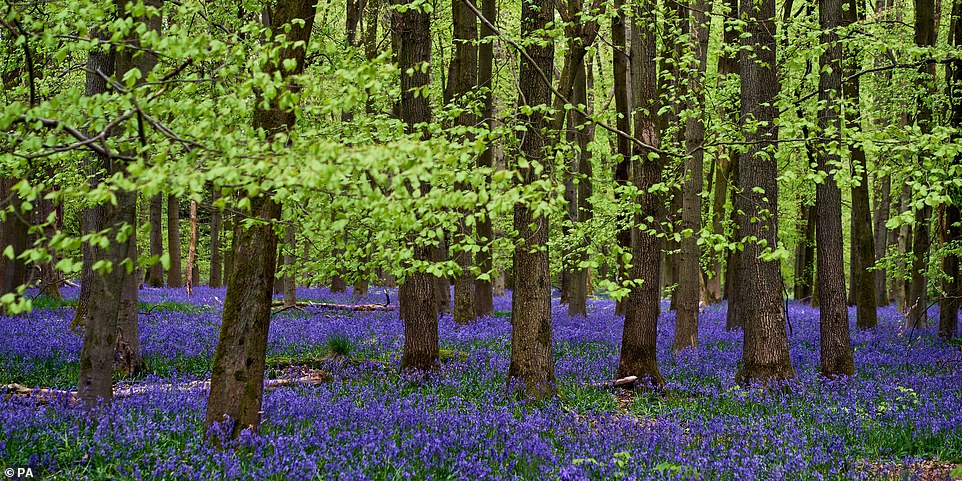 Mr McGivern added: ‘A fresh low that’s moving in is going to bring a spell of persistent rainfall into the South West early morning Saturday, and then it pushes into Northern Ireland, Wales and central parts of England.

‘The rainfall does continue to move its way north eastwards eventually after a wet spell, it turns a bit more showery, and some lively showers return to south western areas with hail and thunder, some sunshine in between, stays largely dry in the north east of Scotland but on the cool side.

‘Fast forward to Sunday, that low still in charge, it’s milling around and it’s turning into a zone of sunny spells and showers again some heavy downpours again, hail and thunderstorms. In any sunny spells, 15C to 17C, otherwise low to mid-teens, feeling cool near the North Sea coast where there will be some mist around.

Looking ahead to Monday, he said: ‘Again, quite cool in the north with 10C to 14C at best, the heaviest showers likely further south across England and Wales. Still some sunshine in between but the showers very hit and miss.’