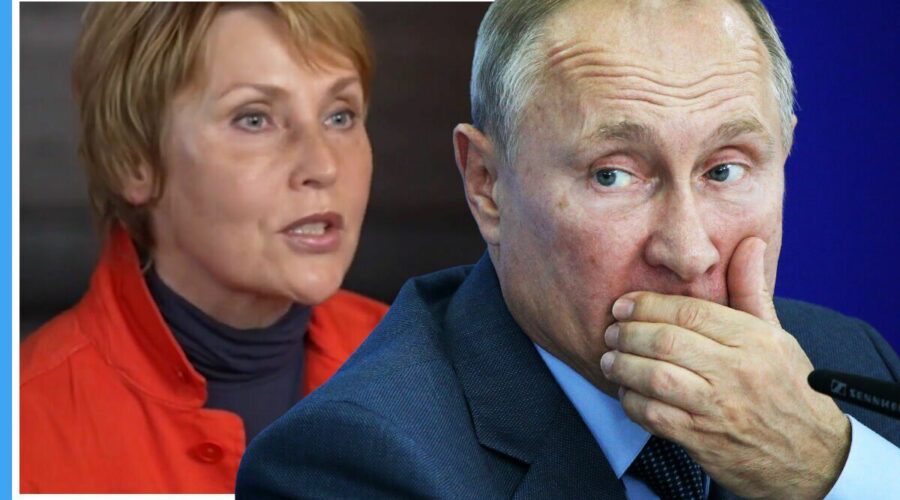 News presenter and correspondent Zhanna Agalakova was once a highly recognisable face on Russian state television. But she, along with several others, quit her job in March in fury over Russia’s war in Ukraine. Now, Ms Agalakova, who is still in hiding, has launched a furious attack against Russian state TV in a move that will be highly embarrassing to Vladimir Putin.

During an interview with BBC Newsnight, the journalist was asked: “A lot of people in Russia trusted you to tell them the truth, tell them the news.

“What would you say to the people in Russia, now, about what’s happening?”

Ms Agalakova replied: “Switch off TV. Switch it off because it is a brainwashing machine.

“Look at the internet and open your heart.

The journalist went as far to contrast Russian TV telling Putin’s invading forces are being cheered and handed flowers with the images of death and tragedy in Ukraine seen by billions of other people throughout the world.

Ms Agalakova also said she finds it “incredible” how they “brainwash their population”.

She added: “It’s like you live in two worlds.

“Even now when you are watching news in Russia, sometimes I do it, it’s like two different planets.

“On one planet, there are ruins and total disaster, death and tragedy.

“In another world, it’s Russian military that was cheered by local population with flowers.

“This is only victories and there is only something positive and great.

“These two worlds don’t mix up and it blows my mind how they do it.

“This is incredible – how they brainwash their population.”

In March, Putin suffered humiliation when senior employees of Russian state television started resigning in what was seen to be a mass exodus from organisations.

Ms Agalakova had told the Latvia-based news website Meduza that she handed in her resignation notice to management on March 3.

She added: “My freedom will come from Friday (March 18). I’m waiting for this moment.”

Mr Rothrock added: “There is supposedly a mass exodus of staff underway.”

Meduza also reported that employees were walking away en-masse from Russia-24, quoting an employee of the All-Russian State Television and Radio Broadcasting Company (VGTRK).

Among the many who quit their jobs was a producer of what is called “the Putin department” as well as Yulia Vorobyova, the head of the department, who had been with the organisation for 15 years, according to journalist Roman Super.

News of this mass exodus had come after Marina Ovsyannikova, an editor for Russia’s state-run Channel One, crashed the live news broadcast to protest against the war in Ukraine.

In dramatic scenes, she held up a sign that read: “No war – Don’t believe the propaganda, they are lying to you here.”

Ms Ovsyannikova appeared in court and was issued a fine for inciting people to participate in the anti-war protests in Moscow, in a video she previously posted on social media.

But, despite this, she refused to back down, and told reporters as she left the court she was “ashamed” to have worked for the Kremlin.