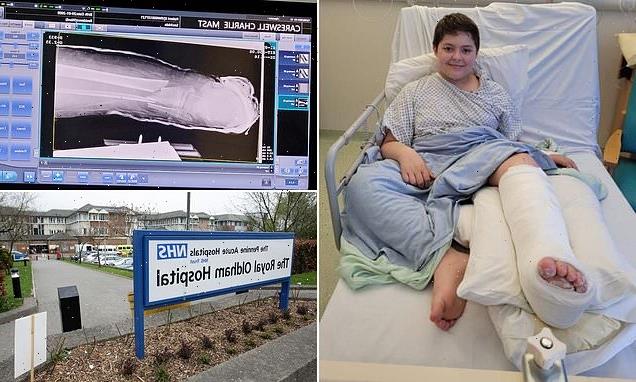 Boy, 12, told he faced a seven-hour wait for an ambulance after breaking his leg was driven to two hospitals by his family – and waited seven hours in A&E before finally having an operation TWO DAYS later 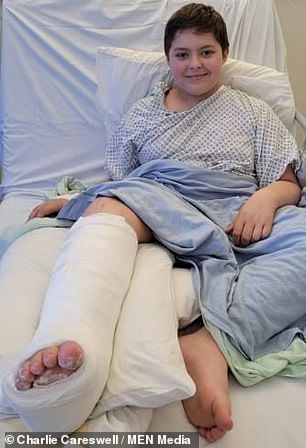 A 12-year-old boy who was told he faced a seven-hour wait for an ambulance after breaking his leg then had to be driven to two hospitals by his family only to end up waiting seven hours in A&E.

Charlie Careswell was left ‘screaming in pain’ after falling off a slide in the garden of The Sandbrook pub in Rochdale on Saturday night.

His mother Zoe phoned 999, before being told an ambulance wouldn’t arrive until 2am.

Unsure what to do, Zoe tried to get hold of Charlie’s grandmother Val who arrived three hours later after she saw messages and missed calls on her phone.

Charlie was then driven to Rochdale Infirmary after three men had to help lift him from the floor into Val’s Honda Civic.

His mother pushed all the back seats down and opened the boot so he could lie flat.

When they arrived, a doctor saw Charlie ‘within seconds’ who was in so much pain he needed gas and air for an X-ray.

Medics confirmed he had broken his left leg and that he would need to have surgery.

But doctors said the place for him to go was Royal Oldham Hospital as it was ‘better equipped’, his family said.

At that point, the family was told the wait for an ambulance would have been another four hours.

Charlie was then driven to Oldham in his father’s Citroen after the family made a make-shift bed on the back seats.

He then spent seven hours ‘in agony’ waiting at A&E, having only had two paracetamol.

His grandmother said he was finally given morphine by nurses the following morning. 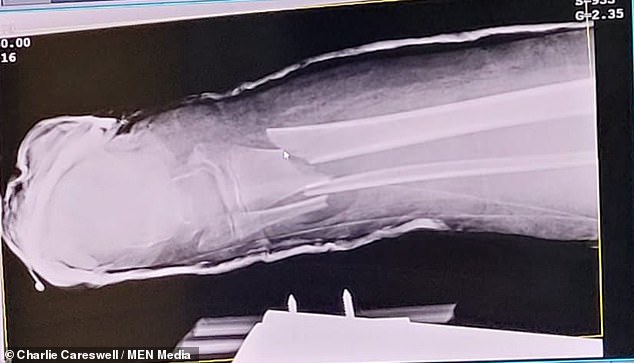 After his family took him to Rochdale Infirmary A&E, doctors confirmed he had broken his leg (pictured) but said he had to travel to different hospital to have an operation to repair the break

On Monday morning, Charlie went into theatre and had metal rods put into his leg.

His family said he is recovering well – and have thanked NHS staff for their efforts.

They said they recognise services are stretched and that medics are struggling.

Val said: ‘Everybody knows the NHS is stretched. It’s not the fault of anybody who works for the NHS – it was a Saturday night.

‘I’m just wondering had we not been able to lift him into the car or been able to get to A&E, would he have been expected to wait on the floor until 2am – seven hours after calling an ambulance?’

Karen Coverley, director of nursing at The Royal Oldham Hospital and Oldham Care Organisation said: ‘We are very sorry for any patients that have to wait longer than expected and would like to offer our sincere apologies to Charlie and his family for his experience, which is not the standard we expect for our patients.

‘The Royal Oldham Hospital, like other hospitals in Greater Manchester and across the country are currently experiencing higher demand for our services. 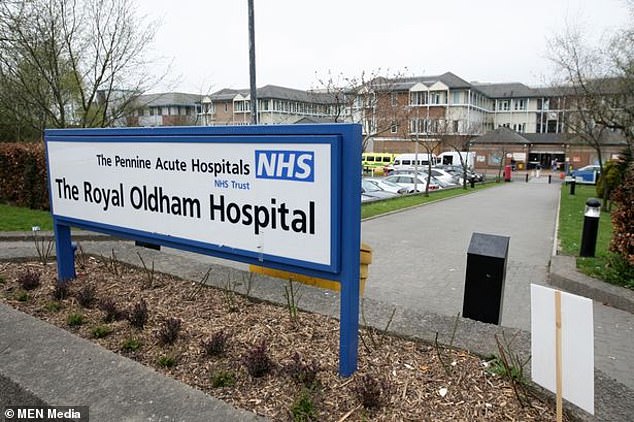 ‘The wait to be seen by a clinician, and admission into an inpatient bed, varies throughout the course of the day and night dependent upon demand within the Emergency Department.

‘Patients are prioritised based on their clinical urgency, to ensure that the sickest patients receive timely treatment and Charlie was transferred into an inpatient bed as soon as this was possible.’

A North West Ambulance Service spokesperson said: ‘We’re sorry that Charlie and his family had to wait longer than they would have liked for an ambulance.

‘We understand that long waits can be distressing for everyone, especially children.

‘However, we prioritise the patients who need us most. At the time of his accident, we were dealing with a very high number of calls, with more than 230 other people waiting for help.

‘In these extremely busy periods, we have been advising some lesser ill patients of a wait of up to seven-and-a-half hours. We will also ask if they can make their own way to hospital, as this can help them receive treatment sooner.

‘In this case, a clinician did call the family back and the call was upgraded, however, they made the decision to take Charlie to hospital themselves.

‘We hope Charlie makes a speedy recovery, and if his family have any concerns, we urge them to get in touch with our patient safety team.’