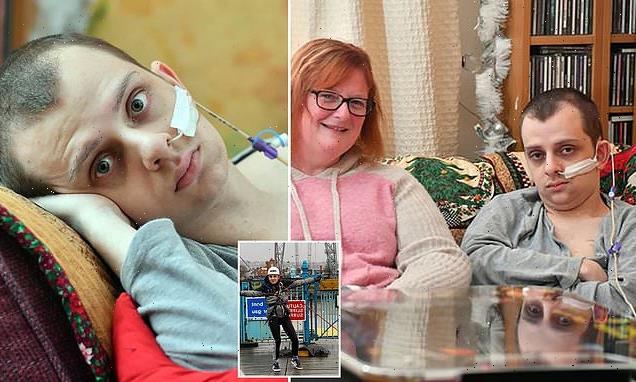 Boy, 15, is diagnosed with inoperable brain tumour after NHS Wales cancelled his annual MRI scan because of Covid pandemic

A 15-year-old boy was diagnosed with an inoperable brain tumour after NHS Wales cancelled his MRI scan because of the Covid pandemic.

Noah Herniman’s annual routine brain scan was cancelled by the Aneurin Bevan University Health Board due to the pressures they were facing from the pandemic.

He suffers from neurofibromatosis which means tumours grow on his nerve tissues and months later was diagnosed with an inoperable benign tumour on the core of his brain.

The 15-year-old, from Chepstow, is well-known for his outstanding contribution to fundraising since he was a young boy, raising funds for Llamau and Women’s Aid in particular.

The teen has been amazed by the reaction of his community to the news of his brain tumour as they have rallied around him and his family. 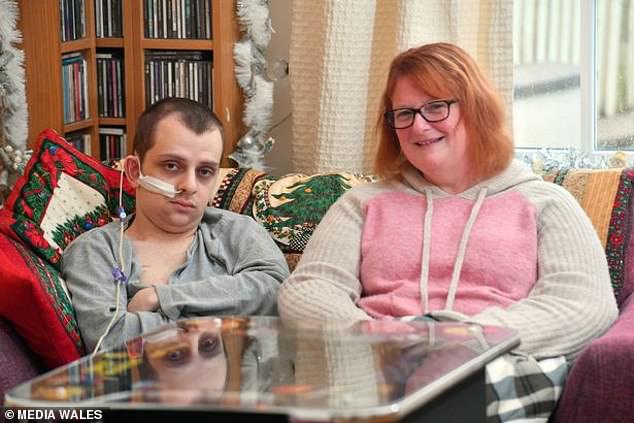 Noah Herniman’s annual routine brain scan was cancelled by the Aneurin Bevan University Health Board due to the pressures they were facing from the pandemic. Months later he was diagnosed with an inoperable brain tumour. Pictured: Noah with mother Shelley

Noah’s mother Shelley, speaking to WalesOnline, said: ‘We had a phone call in May saying they needed to see us and they told us on June 30 that they had found a shadow and it was an inoperable brain tumour.

‘It was an absolute shocker. Nigel [Noah’s dad] wasn’t allowed in with us because we were only allowed two in due to Covid.

‘In hindsight, had I have known what we were walking into, I’d have gone in with Nigel and we’d have told Noah.’

She said it was cruel as the family had watched the football together the night before in a stadium but could not all go in together to the doctor to get the news of Noah’s diagnosis.

It was a shock for the family but his mother described her son as amazing and said he asked the doctor what treatment was available.

Noah then asked if chemotherapy would work or if it would kill him and his mother said that question made her fall apart.

The 15-year-old would likely have been diagnosed with a brain tumour in 2020 if it were not for the pressures caused by Covid on the health service. 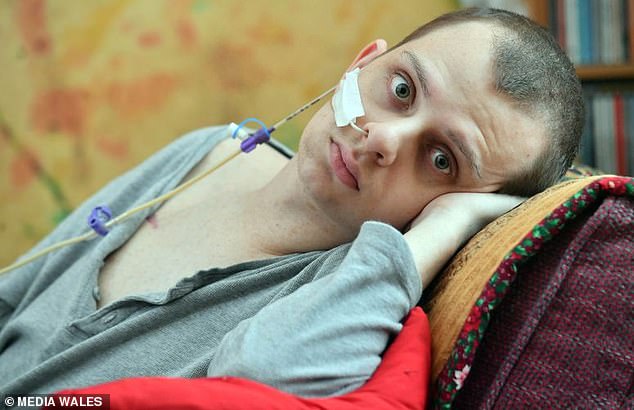 It was a shock for the family but his mother described her son as amazing and said he asked the doctor what treatment was available. Pictured: Noah

He would also have started his treatment much earlier but now has an 18-month chemotherapy cycle which he is a few months into.

Tumours that are benign are not cancerous and do not usually cause problems. However, they can be life-threatening when they press on vital nerves.

Because of where the tumour is in Noah’s brain, he cannot eat properly.

The tumour is in the area of his brain that controls the ability to swallow so he is now fed through a feed line.

His mother said he had been struggling to swallow since 2019 but signs it could be a brain tumour were missed.

However she said she does not blame anyone for the predicament that the family are now in.

The 15-year-old’s mother said that in 2020 everything was on hold and Noah’s scan was not deemed urgent so he did not have it.

She spoke to her son’s GP about Noah’s gag issue but the prospect of being caused by a brain tumour did not come up in conversation.

However, she said that in hindsight the signs were there as he had been lethargic and did not eat well at the time. 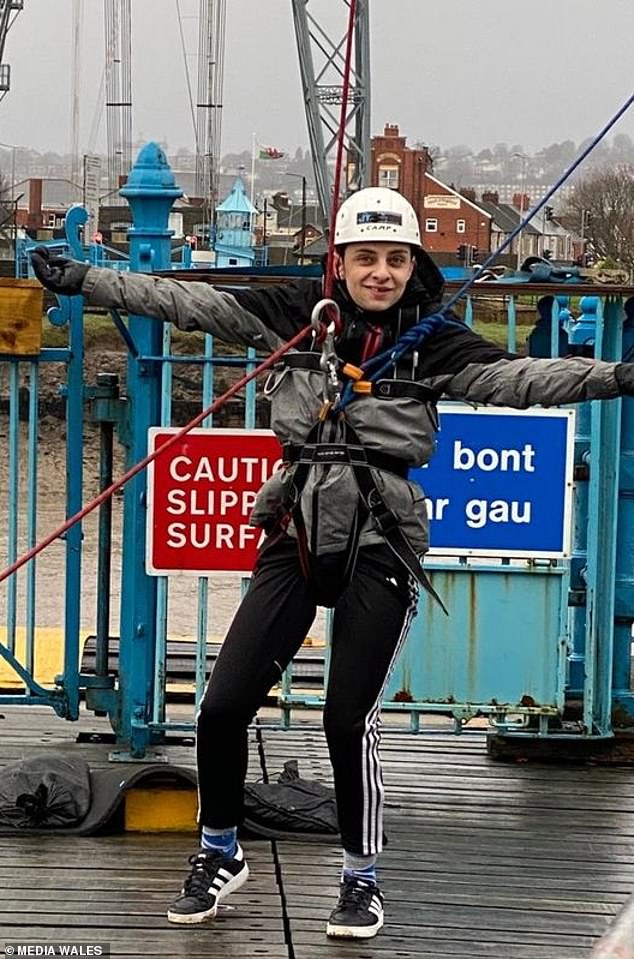 Pictured: Noah at Newport transporter bridge in December 2020, raising money for Bullies Out where he is a youth ambassador

But the family had thought it was caused by Noah being at home from school because of the pandemic.

She said there are thousands of others in the family’s situation because of the strain put on healthcare caused by the pandemic.

Looking back she says she wishes the family had pushed for scans earlier but they knew the pressures of Covid so she thinks it made her less pushy for a scan.

Her sister works as a nurse and her niece and nephew work in hospitals and she has also lost friends to coronavirus.

But the family now knows the scan could have been a game changer for their son.

She said despite their situation the family feels ‘blessed’ that Noah was having annual scans. 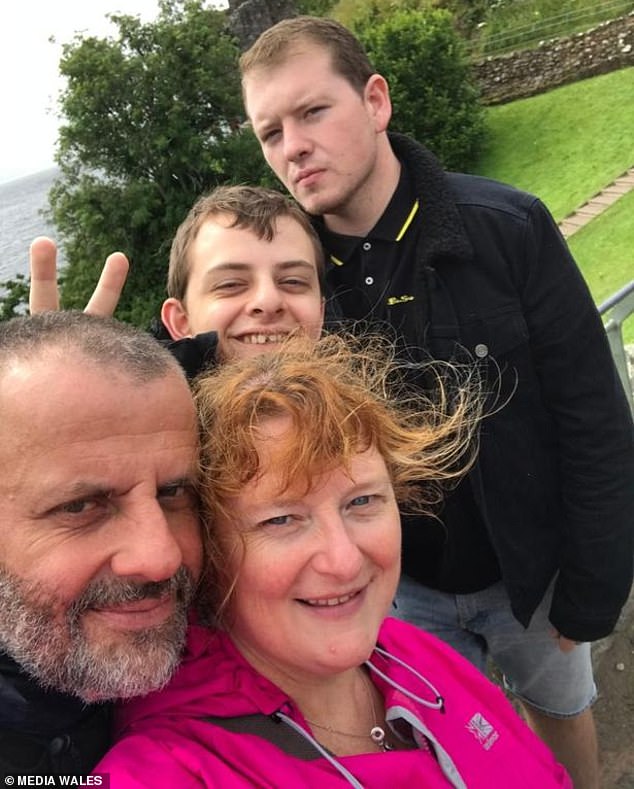 Pictured: Noah (centre) and his mother, father and brother Ashton Adams (back right)

It is unclear what the outlook will be for Noah but they are know there are others in their situation which she called ‘utterly heartbreaking.’

His mother said her son is remarkable and despite his treatment he has still managed to fundraise over the Christmas period for Women’s Aid. Noah’s community came together on Christmas Eve to cheer him up.

The Severn Tunnel brass band came to Noah’s front door to play carols for the family as a substitute for their church visits. Neighbours and friends watched the carols and sang along to them.

There was also a Doctor Who day organised for Noah by Chepstow School, which raised more than £2,300.

The money from the day was divided between the Brain Tumour Trust and Children In Need.

The family are are overwhelmed and grateful for the support they have been given.

A spokesperson for the Aneurin Bevan University Health Board said: ‘All routine scans and procedures were postponed across the whole of the NHS at the beginning of the pandemic and sadly this has resulted in some delays with diagnosis. We are sorry to hear that Noah’s condition has deteriorated and our thoughts are with his family.’

28/12/2021 World News Comments Off on Boy, 15, is diagnosed with inoperable brain tumour
Markets