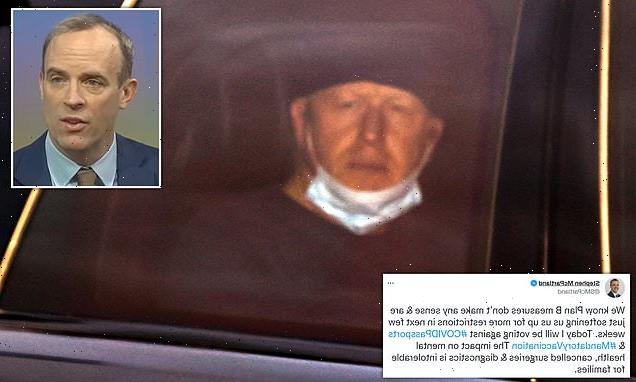 Boris Johnson is facing a 70-strong Tory revolt over his ‘Nazi-style’ in crunch votes today as furious MPs branded them a ‘softening up exercise’ for harsher lockdown.

Scores of Conservatives have vowed to defy the government whip when new regulations rubber-stamping Covid passes for nightclubs and major events, mandatory vaccination for health staff, and mask use come before the Commons.

Dominic Raab risked inflaming the tensions in interviews this morning as he dismissed ‘overstated’ criticism about the measures to combat the Omicron strain. He dismissed backbencher Marcus Fysh’s comparison between Covid passes and the oppressive Hitler regime as ‘crass’ and ‘inappropriate’.

But the scale of the rebellion means the embattled PM will almost certainly have to rely on Labour to get the measures through – despite in theory having an 80-strong Commons majority. Several ministerial aides are threatening to quit rather than back the government.

Tories are also gearing up for an even bigger battle amid claims ministers are preparing to go further by shutting hospitality within weeks if the Omicron strain continues to run rampant.

Whitehall officials have drawn up proposals to limit the number of people allowed in pubs and restaurants within weeks, according to The Sun. There are also contingency plans to bring back furlough and support for businesses if tougher restrictions are needed.

Covid passes are the main focus of Tory rebels today, with anger that they are ‘illogical’ and an infringement of civil liberties. Sajid Javid said yesterday that in future booster jabs will be needed to be ‘fully vaccinated’ for the purposes of the passes.

There is also broad opposition to mandatory vaccination for NHS and care staff, and unhappiness at the economic impact of a return of the working from home guidance on town and city centre businesses at a crucial time of the year if people again stay away from their offices.

The Plan B measures are not in danger of failing because Sir Keir Starmer has ordered Labour MPs to support them.

But the Commons mutiny could wipe out Mr Johnson’s majority and eclipse his biggest revolt yet, when 54 Tories voted against the tier system last December. Some rebels believe it could be bigger than the 80-strong revolt that forced David Cameron to promise the EU referendum. 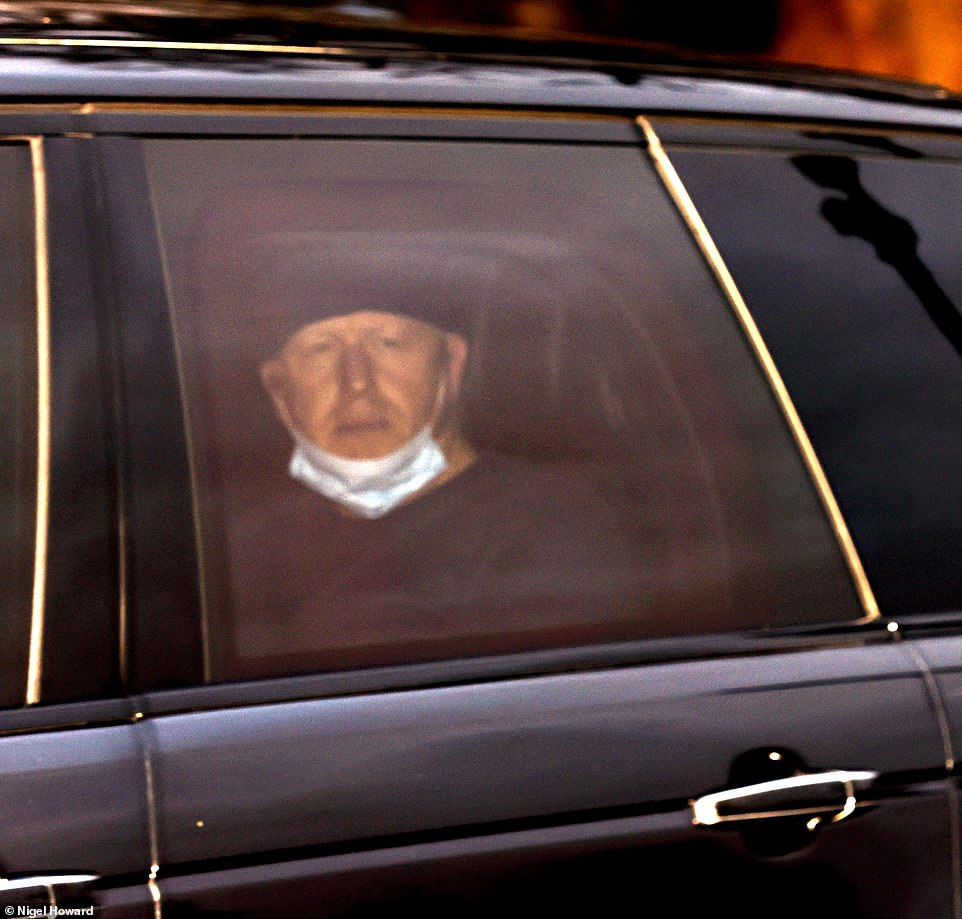 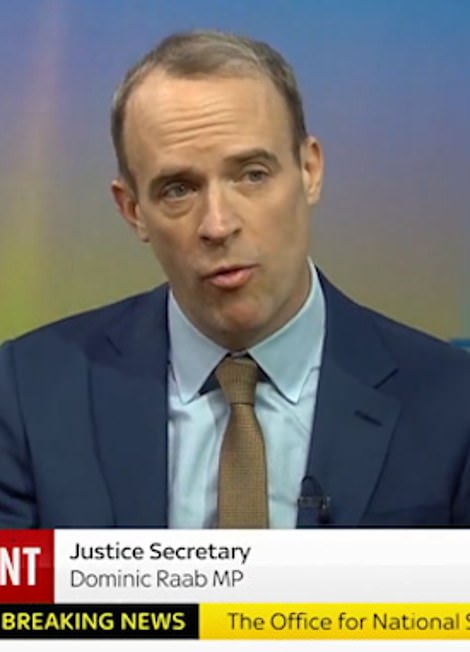 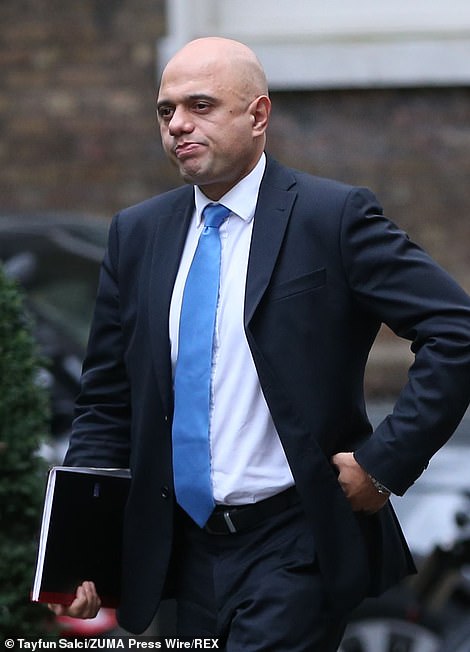 Dominic Raab (left) risked inflaming the Tory tensions in interviews this morning as he dismissed ‘overstated’ criticism of Plan B measures. Sajid Javid (right) has defended the curbs 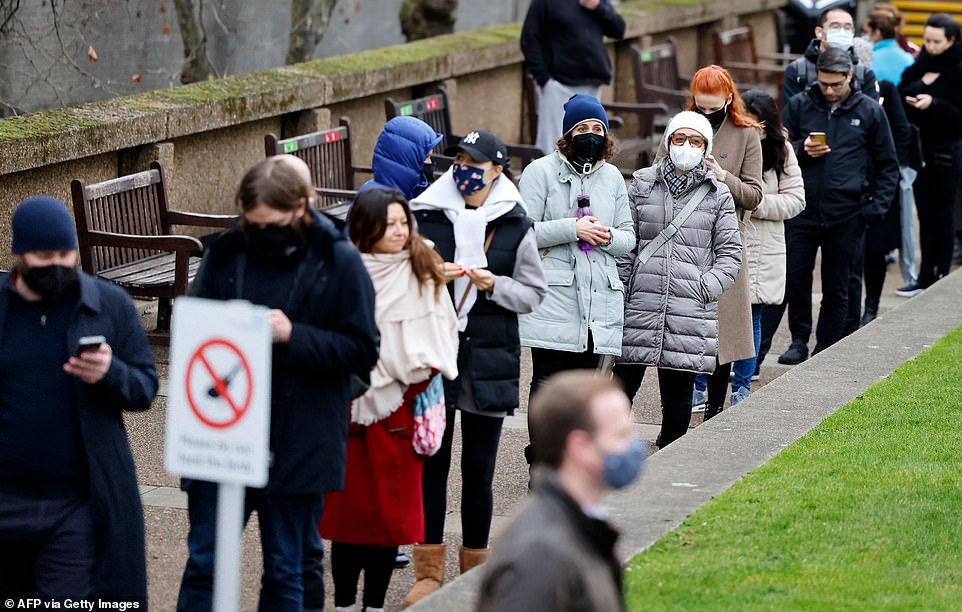 Members of the public queue to receive a dose of a Covid-19 jab at a vaccination centre outside Guy’s and St Thomas’ Hospital in central London on December 13, 2021 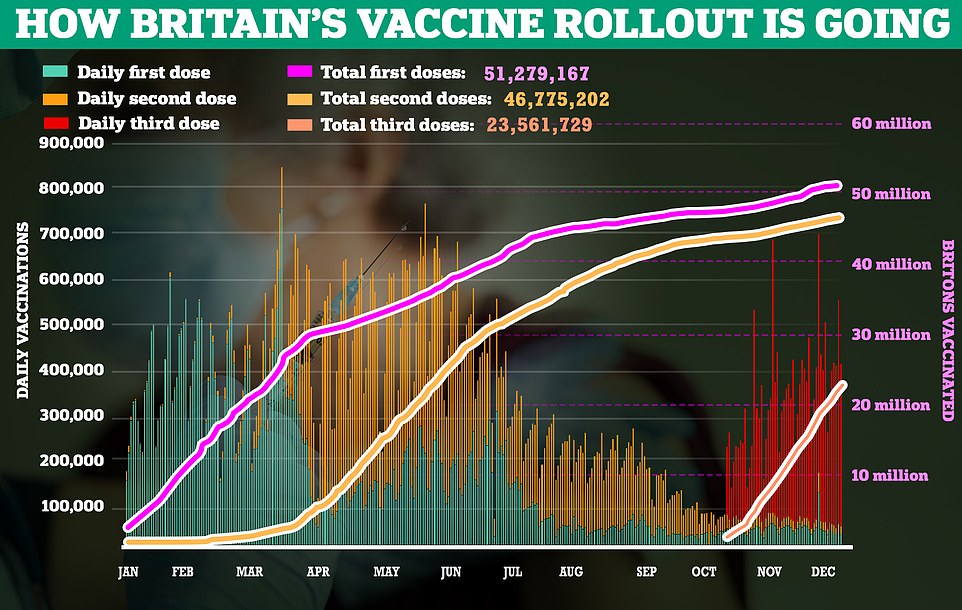 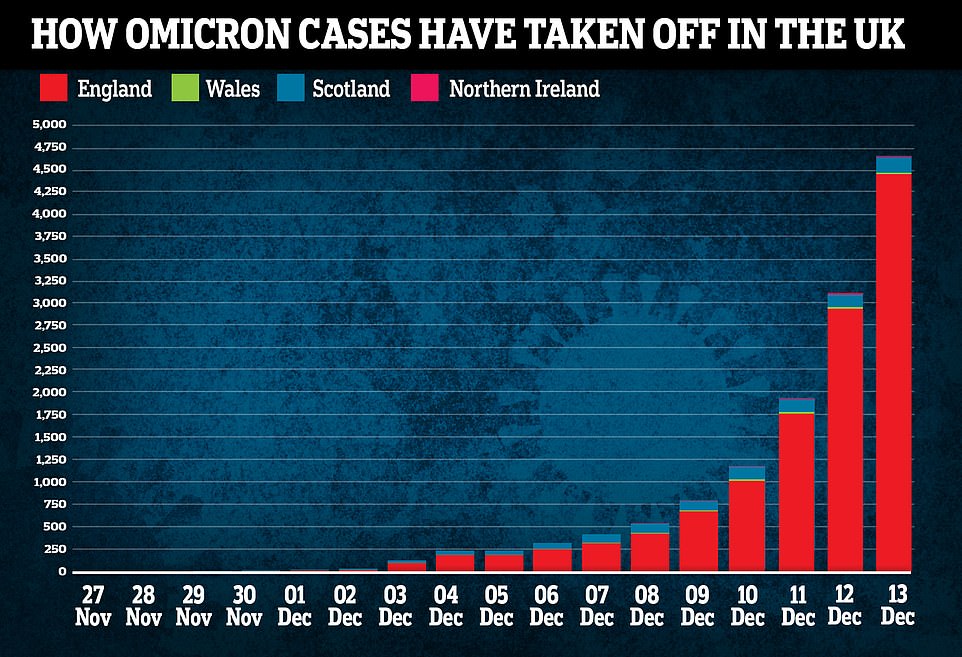 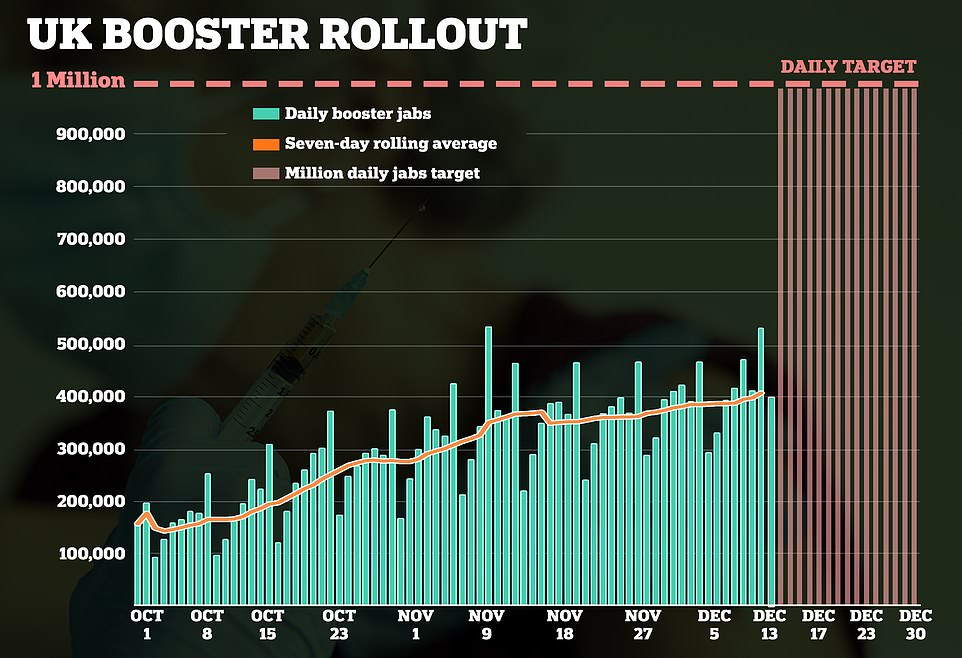 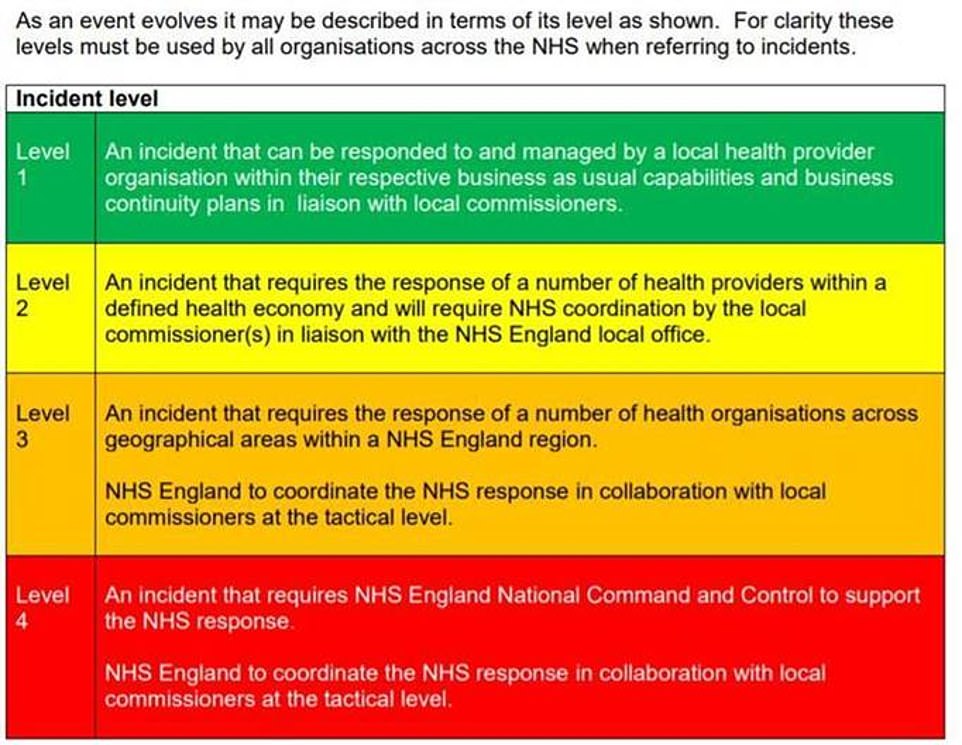 NHS England was put on the highest level of alert for the first time since March. Level four means health bosses believe there is a real threat that an expected influx of Covid patients could start to force the closure of other vital services

Former minister Tobias Ellwood said Covid passes were ‘illogical’. He said there were ‘practical implications’ but the main issue was people could go into venues with ‘proof of having two jabs, which may have been completed six months ago, so even with a new mutation you could actually be carrying Covid’.

‘Leadership is about taking people to where perhaps they didn’t realise they needed to go, but they must understand the plan, and this is illogical at the moment,’ he said.

‘If you can turn up with just a piece of paper, that documentation you’ve received that says you’ve had two jabs completed six months ago, that will not prevent Covid from entering a large venue.’

Fellow Conservative Stephen McPartland said he would be voting against the curbs. ‘We know Plan B measures don’t make any sense & are just softening us us up for more restrictions in next few weeks,’ he tweeted.

‘The impact on mental health, cancelled surgeries & diagnostics is intolerable for families.’

However, a defiant Mr Raab said Tory backbenchers’ concerns over the mandatory introduction of coronavirus health passes are ‘overstated’.

He told Sky News: ‘Even if you haven’t had the double jab or, in due course, the booster, you can still rely on the lateral flow test, which is why I think some of these concerns about this are overstated.’

Mr Raab went on: ‘If you want to go into a crowded venue, I think most people would think that voluntarily as a matter of their own safety, but also those around them, that that is a reasonable thing to do.

‘I don’t think this is a big step or a slippery slope, but I do understand the concerns and that’s why we should have a proper debate.’

Mr Raab hit out at the comparison of coronavirus health passes to Nazi atrocities. ‘I don’t like that kind of language and I don’t think it’s appropriate,’ he said. ‘I don’t think comparing what we are trying to achieve to an authoritarian or Nazi regime is quite right. I think a lot of people find that crass.’

The deputy PM did not rule out further measures being considered for Christmas or new year, saying: ‘These issues are always discussed but we have got Plan B, that’s what we think is required over the Christmas period.’

Pressed if Christmas will be safe, Mr Raab replied: ‘Yes, I think it is. I want to give that reassurance. I think people can look forward to spending Christmas with loved ones in a way that we couldn’t last year.’

Former Tory leader Sir Iain Duncan Smith has admitted being ‘concerned about the mixed and heavy messaging coming from the government’, while Mark Harper, chair of the Covid Recovery Group, said it was ‘not acceptable to keep governing this country by decree’.

One backbencher told The Guardian: ‘These restrictions are the gateway drug to more serious restrictions down the line. I think we’ll be on Plan X, Y or Z by Christmas.’

Another said ‘scare stories’ about further curbs beyond Plan B had ‘actually had the opposite effect’ and emboldened the rebels.

Tory whips are said to have had ‘the thumbscrews out’ to curb the revolt, telling junior members of the Government that they will have to quit if they vote against Covid vaccine passports.

Ministers and whips have also reportedly been sharing internal polling commissioned by the Cabinet Office which showed that the public favours ‘Plan B’ restrictions and a cautious approach to the so-called ‘Omicron’ variant.

Mr Johnson yesterday repeatedly declined to rule out further restrictions ahead of Christmas but stressed the urgency of people getting boosters. He also said MPs thinking of rebelling against Plan B measures needed to recognise there was ‘no room for complacency’ in dealing with Omicron.

In a massively ambitious move, Mr Johnson brought forward the deadline to offer all over-18s a third jab by New Year’s Day as he warned the country: ‘There is a tidal wave of Omicron coming.’

But concerns about whether the Government could even hit the goal were raised almost immediately after Mr Johnson’s 8pm televised announcement. Even at the height of the NHS’s vaccine drive in March, the health service never managed more than 850,000 jabs a day.

In England a booster is available to everyone aged 18 or over from this week as long as the second dose was at least three months ago. Over-30s can already book a booster online and, from Wednesday, this will be extended to over-18s.

The UK recorded its first death involving Omicron, and 10 people are in hospital with the variant. Most of these 10 have received two vaccines and range in age from 18 to 85, though there are no details on whether they have underlying conditions.

Mr Javid told MPs there are now 4,713 confirmed cases of Omicron in the UK, adding that the UK Health Security Agency estimates that the current number of ‘daily infections are around 200,000’.

He added: ‘While Omicron represents over 20 per cent of cases in England, we’ve already seen it rise to over 44 per cent in London and we expect it to become the dominant Covid 19 variant in the capital in the next 48 hours.’

Overall, there were a further 54,661 lab-confirmed Covid-19 cases in the UK as of Monday morning, the Government said.

The NHS will need to exceed 840,000 booster jabs per day in a bid to fight Omicron, which is causing around 200,000 new infections per day, the Health Secretary said.

Mr Javid told MPs that every adult across England could expect to be offered a ‘chance to get boosted by the end of this month’ though he suggested not everyone would get a dose in December.

He said: ‘It is asking a huge amount of our colleagues in the NHS. And it’s our joint view that we can try to offer adults a chance to get boosted by the end of this month. And that does not mean every single person necessarily can get that booster, it requires them to come forward and to take up this offer as well, as well as everything going right in this huge expansion plan.’

It follows confusion over whether the Government has promised that people can all have a jab in their arm by the December 31 deadline, or whether they will just have an offer of a future vaccine.

Mr Javid told the Commons: ‘Until now the highest number of jabs that we’ve delivered in a single day in the UK was over 840,000. We’ll not only need to match that but we will need to beat that every day. But we can and we’ve got a plan to try and do it.

‘We are training thousands more volunteer vaccinators, we’re asking GPs and pharmacies to do more and we’re drafting in 42 military planning teams across every region of our country.’

Mr Javid said he acknowledge that ‘our national mission comes with some difficult trade-offs’, meaning some non-urgent appointments and surgery in the NHS may be cancelled.

He added: ‘These are steps that no Health Secretary would wish to take unless they were absolutely necessary, but I am convinced that if we don’t prioritise the booster now the health consequences will be far more grave in the months that lie ahead.’

Mr Javid also urged people to have boosters as a way of protecting children.

Mr Javid said: ‘One of the reasons to take the measures we’ve said, especially around expanding the booster programme, is to make sure we can prioritise our children.’ 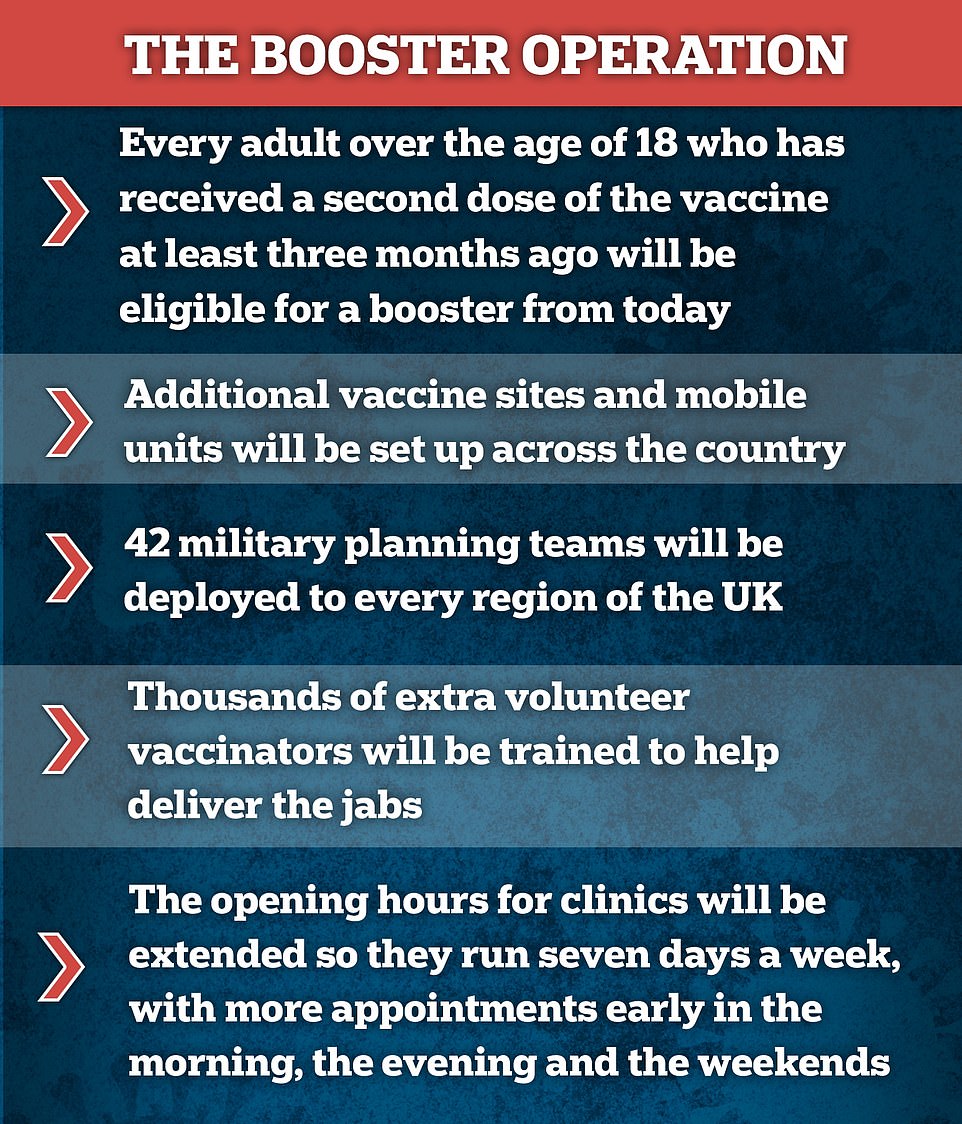 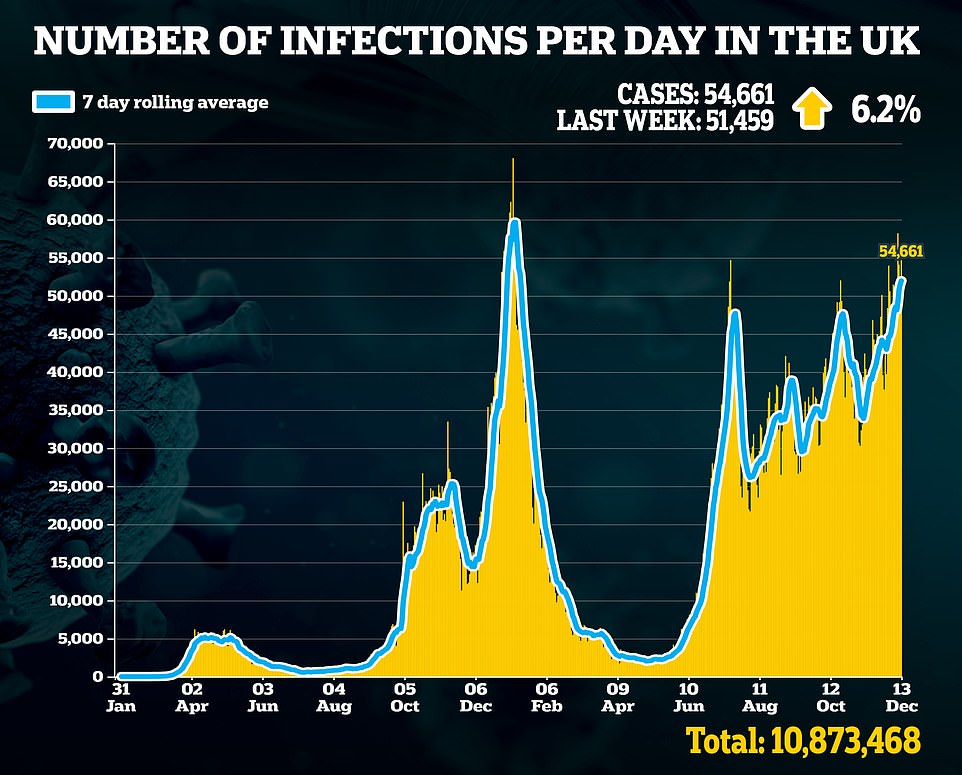 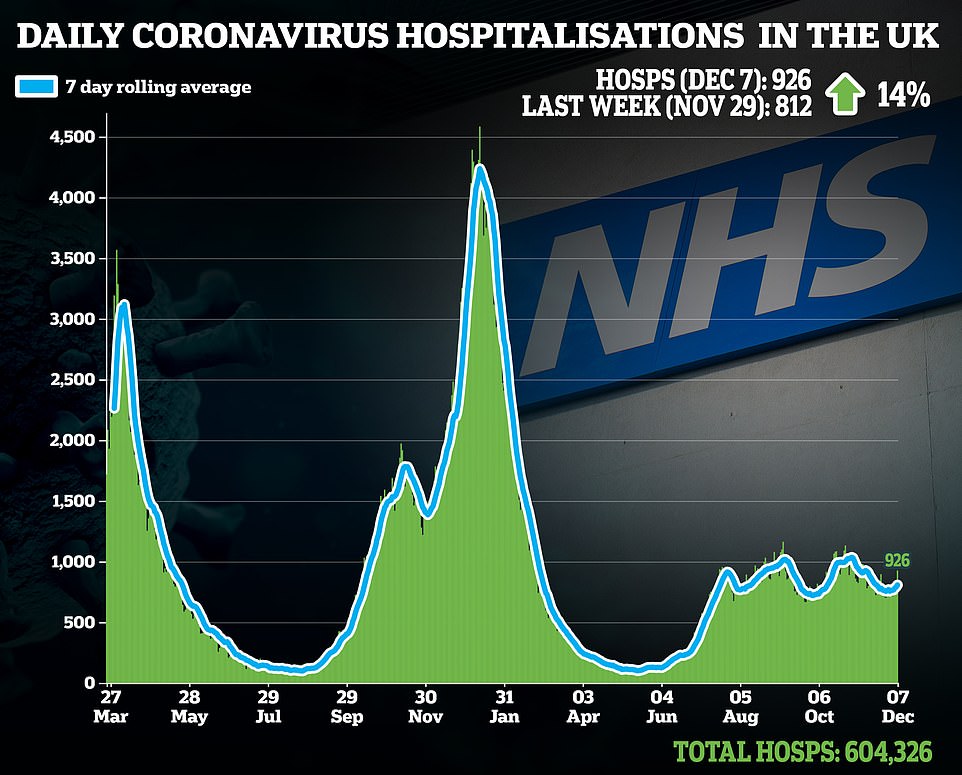 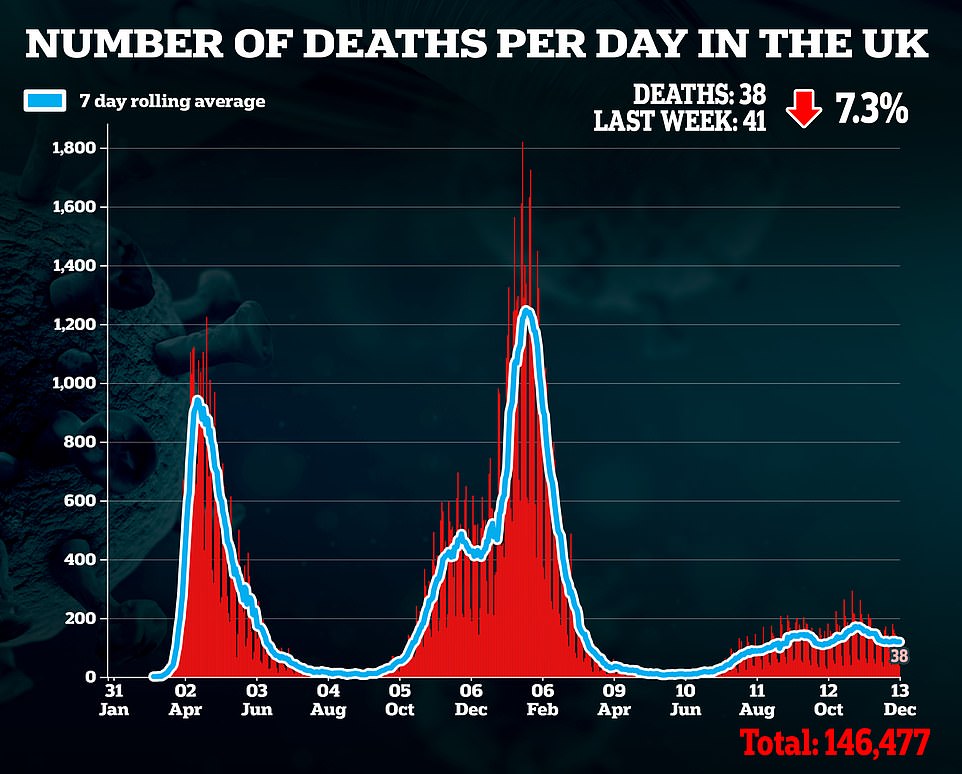 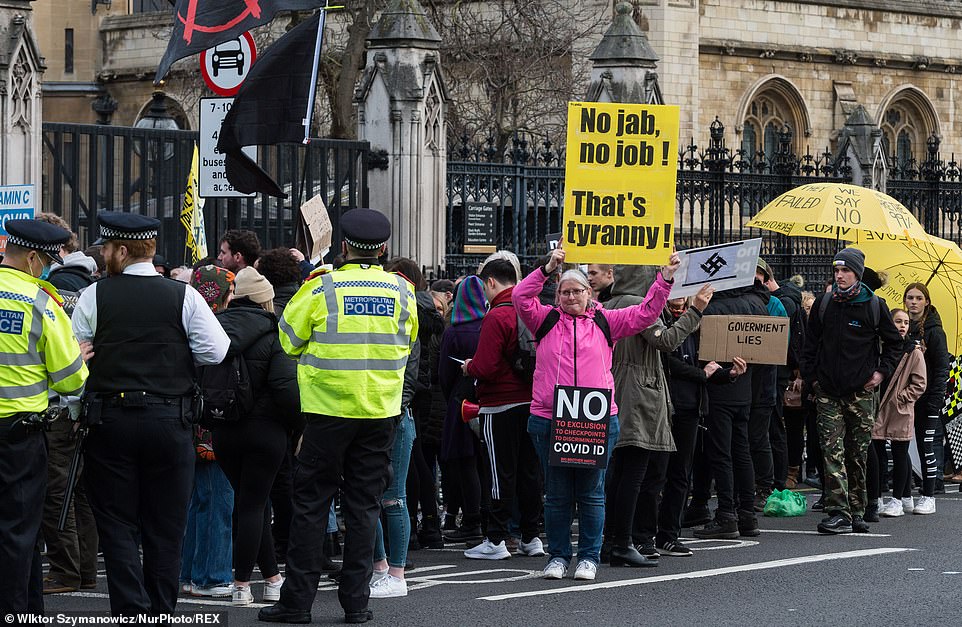 Downing Street has indicated schools will be kept open unless there is an ‘absolute public health emergency’ and warned local authorities against deciding to close early for Christmas as a precautionary measure.

‘There are certainly no plans to put in any restriction on schooling, we know how vital education has been and how detrimental the pandemic has been towards children and young people who, in many cases, have borne the brunt of this,’ the Prime Minister’s official spokesman said.