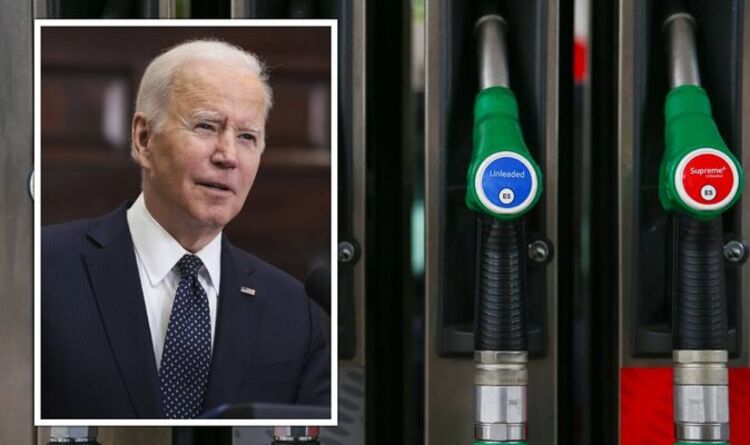 Inflation has skyrocketed across the USA and Europe due to the war in Ukraine. If confirmed, it will be the third oil release announced by the USA since November.

In the immediate aftermath of the news, crude oil prices fell by four percent.

According to the White House schedule, at 1.30pm on Thursday, Mr Biden is due to speak on “his administration’s actions to reduce the impact of Putin’s price hike on energy prices and lower gas prices at the pump for American families”.

The plan is expected to detail how as much as 180 million barrels of oil will be released over several months.

This would be the largest release in the 50-year history of the Strategic Petroleum Reserve.

Mr Biden is on a mission to curb inflation ahead of the midterm elections, which could see the Democrats lose control of Congress.

The benchmark price rose to a 14-year high of $139 at the outbreak of the war in Ukraine.

“A drip release of one million barrels of oil is on the cards for the next six months, a sign that there is not expected to be a quick resolution to the crisis in Ukraine, which has squeezed oil supplies.”

Experts agreed that the move will only be a quick fix, but will not resolve the ongoing issue.

Thomas Pugh, economist at RSM UK, told Express.co.uk: “This is a temporary measure lasting six months, not a permanent source of new supply.

“Oil prices over the next few years will still be driven by events in Ukraine and western countries’ desire to reduce their reliance on Russian oil.”

Will fuel become cheaper in the UK?

Any price different at petrol pumps in the UK is likely to be nominal, according to experts.

Gareth Jeffrey from alldayPA told Express.co.uk: “Oil prices now are close to double what they were a year ago, and the oil price is a driver of inflation both in terms of fuel prices and as an input into the cost of production generally.

“The release of US reserves might make a small difference, but won’t address longer term supply issues.

“Consumers shouldn’t expect a dramatic difference at the petrol pumps any time soon.”

Petrol prices have dropped slightly since Chancellor Rishi Sunak announced a 5p slash on Fuel Duty during his Spring Statement.

But fuel retailers have not been passing on the full benefit of the savings to consumers, with prices only falling by 3.7p a litre.

AA fuel price spokesman Luke Bosdet said: “Why are drivers not surprised that on average a third of the petrol saving has yet to be passed on at the pumps?

“The fuel trade always disputes the accusation that pump prices shoot up like a rocket and fall like a feather. Now we know the truth.”

31/03/2022 World News Comments Off on Biden to release a million barrels of oil from USA – will it affect UK petrol prices?
Markets