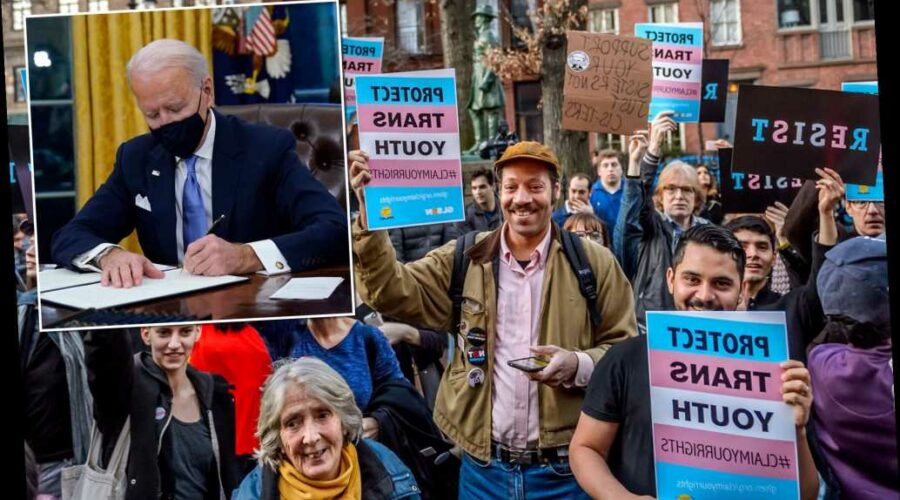 WASHINGTON — Joe Biden set-off a heated identity politics debate less than 24 hours into his presidency when he signed a gender discrimination order that has drawn heat from critics who accuse him of erasing women’s rights.

Language in the order would allow transgender women to participate in women’s sport leagues.

The policy seeks to enforce a Supreme Court ruling from last year that prohibits discrimination on the basis of someone’s gender identity and sexual orientation.

“Every person should be treated with respect and dignity and should be able to live without fear, no matter who they are or whom they love,” read the order, signed on Biden’s first day in office on Wednesday.

“Children should be able to learn without worrying about whether they will be denied access to the restroom, the locker room, or school sports.”

As more transgender athletes have begun fighting to participate in women’s sports, a debate has intensified over whether they should compete on the same playing field, given the biological differences in endurance and muscle mass.

The implied politicization of gender in sports drew immediate outrage online with “#BidenErasedWomen” and “#TERFs” becoming some of the top trending Twitter hashtags in the US on Thursday morning, as two sides of the political debate duked it out.

TERF is an acronym which stands for “trans-exclusionary radical feminist” and is considered a slur against people who espouse feminist beliefs and distinguish biological women from trans women.

“Unilaterally imposing trans ideology on a nation with no thought for women’s rights is not how you create unity,” feminist activist Dr. Jane Clare Jones wrote in a tweet, criticizing the decision.

The LGB Alliance, a lesbian, gay and bisexual alliance group from the UK which has also been labelled as “transphobic,” said they were “appalled” by Biden’s order.

“We are appalled by @potus’s executive order erasing the sex-based rights of women and girls,” read a tweet from the group.

“It deals a severe blow to women and girls in sport, prisons, rape shelters, hospitals etc and bans lesbians and gays from having our own spaces. We will help our US friends to oppose it.”

Film director Sonia Poulton also pushed back on the charge she was “transphobic” for criticizing Biden’s order.

“I get called TERF because I believe women have a right to our own sports, prisons, refuges & spaces and because I believe children should be protected from people who seek to sexualise them and to confuse them about who they are. Happy to stand for what I do,” she wrote.

Added another pundit: “If you think opposition to biological advantage is transphobia, you’re a f—ing idiot.”

Trans activists argued that the Biden administration protecting the rights of transgender Americans did not rob women of their rights.

“I see #BidenErasedWomen trending so seems like a good time to remind everyone that trans people have been around in every recorded culture,” wrote transgender activist and journalist Paris Lees.

“Biden has simply said that he’s not going to allow people like me to be discriminated against for using female toilets, as we’ve always done,” she went on.

“There is no evidence this has caused any problems for the rest of society. Trans people using the toilets that they feel are appropriate is not new — the push to discriminate however is.”