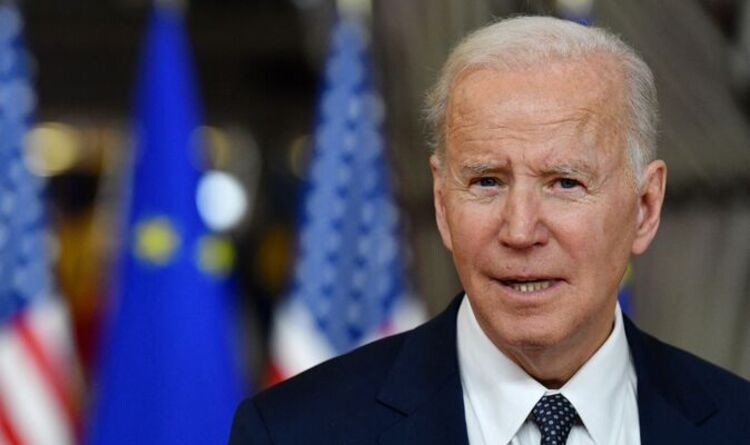 Speaking about the UK’s role in supporting Ukraine, Nile Gardiner, former aide to Margaret Thatcher, said “Brexit Britain is leading on the world stage”, claiming the US is noticing “tremendous British leadership”. This, he said, has been possible because the UK is “no longer shackled” to the EU.

Joe Biden has been seen to be a major opponent of Brexit throughout his presidency, following in the footsteps of his predecessor Barack Obama.

For example, he took a tough stance on the UK with regards to the Northern Ireland Protocol in 2020, when he warned that the US would not strike a trade deal with the UK until peace in Northern Ireland had been secured.

Mr Biden tweeted: “We can’t allow the Good Friday Agreement that brought peace to Northern Ireland to become a casualty of Brexit.

“Any trade deal between the US and UK must be contingent upon respect for the Agreement and preventing the return of a hard border. Period.”

But Mr Gardiner said the Biden administration “has had to eat its own words on Brexit”, adding: “The fact that Great Britain is no longer shackled to the European Union means that the British government is able to operate far more effectively than it would have done as part of the supranational European Union.

“The UK, more than any country in the world, has been at the forefront of supporting the Ukrainian people in the face of Russian barbarism, and Boris Johnson deserves great credit for his leadership.”

He said Mr Johnson’s leadership “has been significantly stronger, more robust and visible, than that of Joe Biden, who is supposed to be the leader of the free world.”

Mr Gardiner said that EU countries were copying Britain after it set a “tremendous example”.

He said: “I think Brexit Britain is leading on the world stage, but also in Europe, and first of all, Britain’s EU competitors are now taking action following in the footsteps of Britain’s tremendous example.

“The reality is that the UK is way ahead of most of its European allies in supporting Ukraine and especially the big powers of Europe: France, Germany, Italy and Spain – (who) are way behind where Britain is in terms of support – and they’re trying to catch up.”

Describing the Biden administration as having previously had a “distinctly unhelpful anti-Brexit mindset”, Mr Gardiner told Fox News that it is now “witnessing tremendous British leadership over Ukraine and even the most ardent anti-Brexiteers in the Biden White House are now starting to understand the benefits that Brexit is delivering for British leadership, and also for strengthening US and UK leadership.”

Mr Gardiner’s comments come after Mr Johnson embarked on a high-profile visit to Kyiv, where he was pictured walking through the streets of the war-torn city.

During the trip, the UK government pledged a further 120 armoured vehicles as well as new anti-ship missile systems to Ukraine.

Mr Johnson promised that the equipment would help ensure Ukraine “can never be bullied again”.

Giving a speech alongside Ukrainian President Volodymyr Zelensky, the UK Prime Minister said: “I think that the Ukrainians have shown the courage of a lion, and you Volodymyr have given the roar of that lion.”

Chief diplomatic adviser to Mr Zelensky, Igor Zhovkva, said it is “very important” for the Ukrainian people to see world leaders visit the country, adding: “every visit, every phone call, every act of support counts and brings us to victory.”

“We were preparing for a while.

“This visit was very timely and very important in terms of war.”