Hundreds of women have taken to the streets of Belarus’ capital to demand authoritarian leader Alexander Lukashenko step down – with a great-grandmother who has become an icon of the protest movement among scores of people arrested.

Police blocked off the centre of Minsk and detained more than 80 demonstrators on Saturday, according to the Viasna human rights organisation

It was the latest in a series of major rallies that have rocked the country since early August, by far the largest and most persistent protest movement it has seen since it separated from the Soviet Union in 1991. And among those arrested was Nina Bahinskaya, a 73-year-old great-grandmother who has become a hero of the opposition to the Belarussian president.

While Mr Lukashenko‘s officials say he won 80% of the vote in the 9 August election that triggered the protests, opponents and some poll workers say the results were manipulated.

He further angered opponents this week by taking the oath of office for a new term in an unexpected ceremony, and protesters on Saturday carried placards denouncing him as “the secret president”.

Sviatlana Tsikhanouskaya, Mr Lukashenko’s main election opponent, who went into exile in Lithuania after the election, praised the female demonstrators and derided the police in a statement.

She said: “What about the men themselves, who, hiding their faces, use force against women? Is it possible to live peacefully with such men?”

A large protest is also expected on Sunday, typically the day that sees the biggest demonstrations – attracting crowds estimated at up to 200,000. 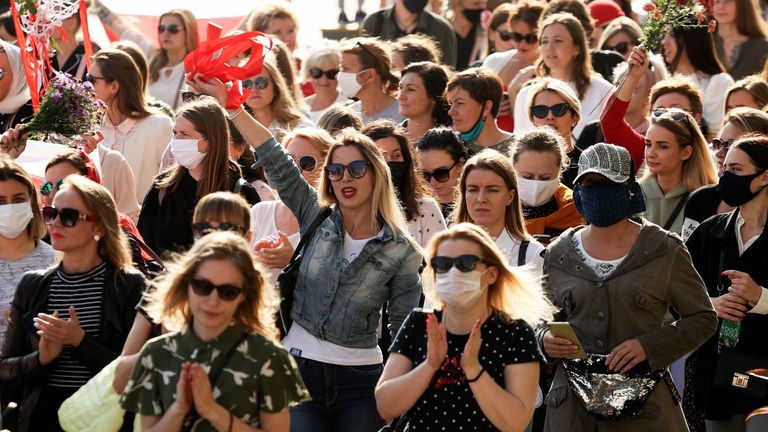 The election and Mr Lukashenko’s defiance of the protesters have faced widespread condemnation from the West, and Ms Tsikhanouskaya this month urged the United Nations to send monitors to Belarus.

US President Donald Trump, however, has remained largely silent on the matter – prompting an attack from Democratic presidential contender Joe Biden.

“President Trump refuses to speak out against Lukashenko’s actions or to offer his personal support for the pro-democracy movement,” Biden said.

Mr Biden referred to the Belarussian politician’s inauguration as “sham ceremony”, which came on the same day that Mr Trump’s refused to commit to a peaceful transfer of power should he lose November’s US election.

“A president hiding in fear from his own citizens, refusing to accept the will of the people is a sign of a weak, illegitimate autocrat, not a strong leader,” said Mr Biden.

Mr Lukashenko, a former collective farm manager, has been in office since 1994.

During the time since then, he has repressed opposition and independent news media and kept most of the country’s economy under Soviet-style state control.

Trump and the coup that failed: Maria Bartiromo, James Freeman 'The Cost'

'We are going in the wrong direction': Fauci predicts that Americans will not see 'semblances of normality' until 2022 amid the coronavirus pandemic