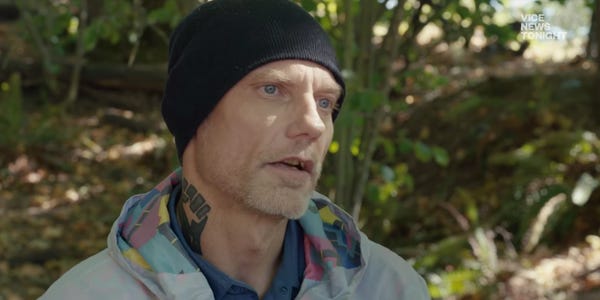 A man suspected of fatally shooting a Trump supporter during protests in Portland said he saw "'a civil war right around the corner' and that his shot "felt like the beginning of a war."

Michael Reinoehl was named in connection with the death of Aaron Danielson in Portland on Saturday night. Federal agents tried to arrest him late Thursday, but the confrontation ended in a shootout, and Reinoehl's death.

He had earlier given an interview discussing the killing, which was broadcast on Thursday by Vice News.

"Honestly, I hate to say it, but I see a civil war right around the corner," he said. "That that shot felt like the beginning of a war."

In the interview, Reinoehl said he was acting in self-defense, and believed that he and a friend were about to be stabbed.

He told the interviewer: "You know, lots of lawyers suggest that I shouldn't even be saying anything, but I feel it's important that the world at least gets a little bit of what's really going on."

"I had no choice. I mean, I, I had a choice. I could have sat there and watched them kill a friend of mine of color. But I wasn't going to do that."

Reinoehl was under police investigation over the killing of Aaron Danielson, a supporter of the alt-right group Patriot Prayer who was taking part in a pro-Trump counter protest in the city.

Reinoehl said in his interview that he saw the Patriot Prayer protest as threatening.

Vice News said that Reinoehl spoke with a freelance reporter who shared the conversation with Vice.

Reinoehl said: "I'm seeing all these vehicles with hatred, people in the backs of the trucks yelling and screaming and swinging bats and sticks at protesters that are just standing there yelling at them."

He said that he went to help a friend that was surrounded by trucks with armed pro-Trump protesters. "I saw someone that is a dear and close friend of mine in the movement by himself basically confronting all these vehicles."

"And so I let him know that I'm here, parked my vehicle and joined up with him, found myself in the intersection in front of the food trucks surrounded by trucks and cars that had weapons."

He said that a man threatened to stab him and another protester: "Had I stepped forward, he would have maced or stabbed me."

Reinoehl said that he was "confident that I did not hit anyone innocent and I made my exit."

Reinoehl said he did not turn himself into the police because he thought police were collaborating with right-wing protesters and they would not protect him.

Protests have taken place in Portland since George Floyd was killed by police in Minneapolis, sparking protests in the US and around the world.

Those protests have often spilled into violence, particularly when protesters have clashed with right-wing groups and Trump supporters.

The Times reported that Reinoehl had regularly protested in recent weeks and acted as a kind of security guard.

Randal McCorkle, another protester, told the Times that "nightly, he would break up fights"

Reese Monson, a Portland protest leader who helps organize the protests' security, said Reinoehl was trained in de-escalation said he was "excellent" at it.

The Times reported that Reinoehl said on Instagram in June that "I am 100% ANTIFA all the way!" — aligning himself with a group Trump has blamed for anti-police-brutality protests since they first started.

As Business Insider previously reported, Antifa, short for anti-fascist, is a leaderless organization that opposes groups it sees as fascist.

Reinoehl wrote: "I am willing to fight for my brothers and sisters! Even if some of them are too ignorant to realize what antifa truly stands for. We do not want violence but we will not run from it either!"

04/09/2020 World News Comments Off on Before he died in a police shootout, an activist described shooting a Trump supporter in Portland as ‘like the beginning of a war’
World News

Bankia and Caixabank Decide to Merge: Spain on Verge of Getting New…