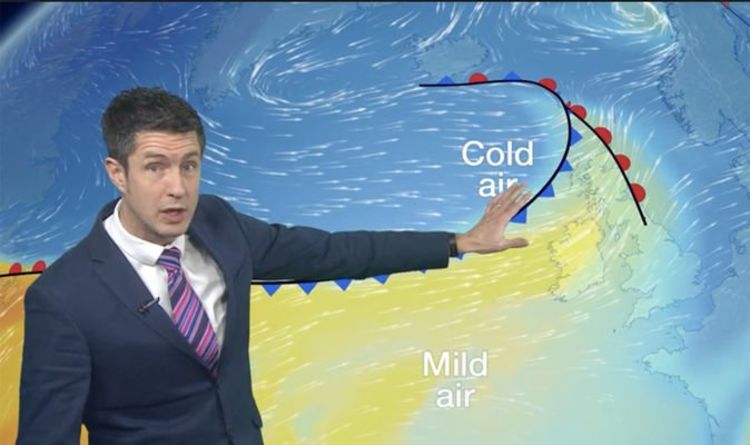 BBC Weather: Showers to turn to snow in parts of UK

The latest BBC weather forecast showed up to 15cm of snow landing in Scotland within just 24 hours. This comes as meteorologist Chris Fawkes told BBC Breakfast viewers that rain will rapidly turn to snow “later today and tomorrow” across parts of the country. A Met Office yellow weather warning for snow and ice is in place from 5pm on Saturday until 3pm on Sunday for Scotland – but snow is also expected to spread to northern England as well.

Mr Fawkes said: “We are looking at a very mixed bag today weather-wise.

“Across the south and east of the country, it is a mild day. Some sunshine for much of the day.

“But across the north and west of the country, the rain will be spreading its way in and the weather will be turning increasingly windy.

“If that wasn’t enough, in Scotland, as colder air works in, later today and tomorrow, we will see that rain turn to snow and it could cause one or two issues on Sunday.”

The BBC meteorologist continued: “As the cold air moves in behind the weather front, we see that rain turn to snow.

“We already have a little bit of snow across the high grounds in Scotland right now.”

Temperatures plummeted to -2.8C in Aboyne, Scotland, as Arctic conditions swept in.

Elsewhere, conditions are “actually quite mild” today across southern regions, where the wind will come “from a southerly direction”.

Belfast will reach 8C while London will see the mercury hit 10C.

Mr Fawkes continued: “Overnight is when we will see showers turning to shower more frequently in Scotland with some accumulations expected.

“Into Sunday morning, snow and ice could be an issue for parts of Scotland.

“The hills – above 300m – could see 10 to 15cm of snow, with a few centimetres expected on lower levels. It could be slippy and slidey in the morning.”

Traffic Scotland has already issued warnings to drivers in Dundee, Moray, Perth and Kinross and Aberdeenshire due to low temperatures affecting driving conditions.

The Met Office has also warned that “strong westerly winds” will lead to “blizzard conditions and drifting snow on higher routes”.

Looking ahead to next week, Mr Fawkes said that warmer air will replace the wintry weather with unusually mild temperatures expected on Tuesday.

London could see a balmy 14C while Edinburgh will see 10C – well above average for the time of year.

However, the weekend’s wintry weather forecast comes follows the news that the cost of heating homes is set to rocket by 54 per cent for 22 million households from April.