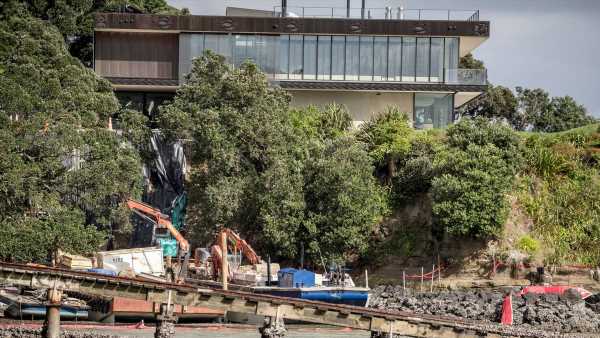 Many of Auckland’s big money names have made tidy sums on the side buying and selling houses.

An investigation into New Zealand’s luxury real estate market by property website OneRoof.co.nz has found that 7 per cent of the homes that sold for $5 million or more since 2000 were “flipped” – sometimes for huge profits.

Some of these houses are known only to a small group of wealthy people and the real estate agents who work with them, and many have never been publicly listed for sale.

The average gain for the 37 properties identified as “flippers” was $3m – but six enjoyed profits of more than $10m, with one, a grand home in Auckland’s Herne Bay, making $17.1m.

In comparison, the average Aucklander who resold their home in the last three years saw a gain of less than $300,000.

The numbers are revealed in the latest OneRoof Property Report, published in the New Zealand Herald on Monday, and show the huge sums being paid for real estate at the top end of the market.

But agents claim Kiwi mansions could be making even more money if the foreign buyer ban was lifted and that a shortage of luxury mansions is what stops wealthy homeowners from selling up.

Barfoot & Thompson agent Paul Neshausen, who sells in Auckland’s Eastern Bays, told OneRoof: “There’s a lot of demand for $10m to $20m houses but the stock is limited.”

He said he regularly gets calls from buyers with budgets of up to $20m. “There’s a ton of people with that much money who are New Zealand residents and there is a ton of people who want to move here but there’s nothing for them to buy,” he said.

Ray White agent Ross Hawkins said the foreign buyer ban was another impediment. “I’ve got overseas buyers who don’t have citizenship in Singapore or Australia but want to come here with $15m-$20m and buy something,” he said.

The highest sale price for a residential property in New Zealand is $38.5m for a mansion in Auckland’s Ōrākei. That record has lain unchallenged for more than seven years but Bayleys agent John Greenwood, who sells coastal properties up and down New Zealand, told OneRoof if the foreign buyer ban wasn’t there, New Zealand would see $100m sales. “People who don’t want to sell at the moment might sell for that.”

OneRoof’s investigation into the multimillion-dollar flippers found that the best way to make money at the top end of the market is to demolish and build from scratch.

Alternatively, a top-to-toe renovation of one of the city’s grand homes could turn a good profit, if the buyer is prepared to spend several million dollars on the project.

The luckiest sellers have been those who simply had the best house in the best position and a buyer who was desperate to have that house – and only that house.

According to historical reports in the New Zealand Herald, Auckland surgeon John Dunn and his wife, art patron Rose, bought the 4000sq m property in 2001 for just under $7m and replaced the derelict house with a luxury six-bedroom mansion.

The Fearon Hay-designed home took several years to build and they only moved into it in 2012, three years before they decided to sell up and move to a smaller home in neighbouring Marine Parade.

Cook has turned down at least two $40 million-plus offers for his home and has no plans to sell.

The second-biggest house-sale profit was made by Shrek director Andrew Adamson. He sold his Auckland waterfront home for $24m last year – $16.9m more than what he paid for it in 2006.

Other notable flips include:

– $15m in nine years for a seven-bedroom waterfront home on Cremorne St in Herne Bay.

– $14.9m in 15 years for a 4022sq m property on Clifton Rd in Hauraki after a substantial renovation and enlargement of the house.

Another flipped house that reaped a huge profit in a very short period of time involved the Mad Butcher chief executive Michael Morton. The New Zealand Herald reported that Morton bought a 482sq m house on 3443sq m on Victoria Ave in Remuera for $7m in 2011 and quickly demolished it, putting up in its place a 900sq m four-bedroom luxury mansion.

Morton then sold the property in 2015 for $18.5m to fund manager Clive Perkins, who made real estate headlines in Australia when he spent A$30m on a waterfront house in Sydney’s exclusive Vaucluse suburb.

28/05/2021 World News Comments Off on Auckland’s biggest real estate flips: How the rich get richer
Markets