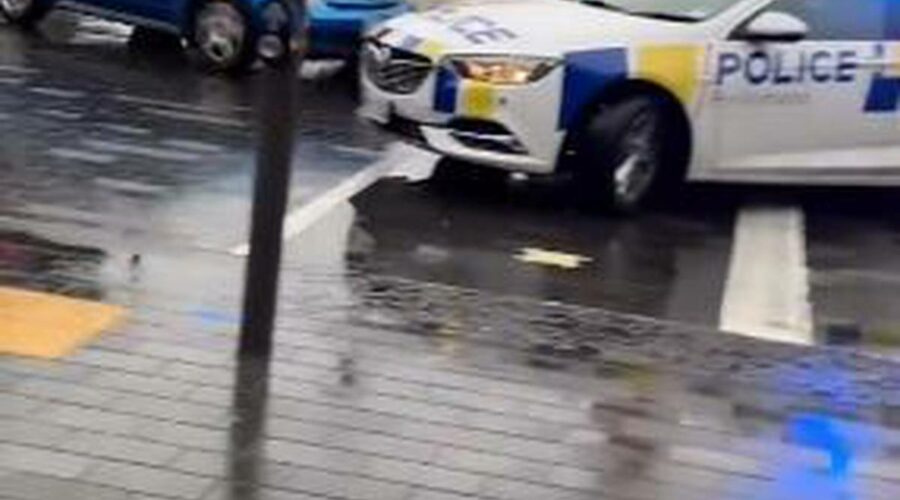 Dramatic video footage has emerged of the shocking moment a driver rams their car into the side of a police vehicle in downtown Auckland.

It show the blue car driving away from Princes Wharf towards an intersection going up to Hobson St.

But just as it looks as if it will continue driving off, the driver suddenly does a U-turn, pauses for a split-second before speeding up and slamming straight into the stationary police vehicle.

The woman who captured the horror moment told the Herald she was shocked at the events that had unfolded in front of her this morning.

“I thought: ‘Oh surely it’s not going to go straight into the police car’ – and it did.”

The woman, who only wanted to be known as Isabella, had been standing at the intersection near the Viaduct when she heard the police officer yelling out for the blue car to stop.

At one point, it headed straight towards her and she rushed to shelter behind a nearby pole.

“I was thinking: ‘Oh my God, is this really the morning where I get run over by a car?”

After the vehicle moved away and she knew she was safe she took out her cell phone and started recording.

She said immediately after the blue car slammed into the police vehicle, the officer who had just got into it climbed out the passenger’s side door.

At one stage, as the blue car backed away from the police vehicle, Isabella said she thought the driver was about to slam into it again.

Instead, the driver got out and walked towards the police vehicle while yelling and pointing at the officer inside.

She was later brought to the ground after being Tasered by officers who arrived shortly afterwards.

A few minutes before the police car was rammed, another woman standing on a nearby footpath had seconds to dodge the blue car that mounted a cycle path and made a beeline for her.

Still shaken, the pedestrian said she had just got off a ferry and was standing on the footpath at the lower end of Albert St when she saw a small car facing the wrong way in a long queue of traffic.

The pedestrian, who did not want to be named, said the driver was blaring her horn and swearing at people to get out of the way.

“I noticed her window was down and I said ‘Hey calm down, you’re in the wrong lane’ and she went nuts.

“Then she tried to run me over. She drove across the cycle path and onto the footpath.

“It took a minute to register that she was steering towards me. I jumped to the side.

“If I hadn’t moved she would have hit me.”

The woman, who was heading to work in the CBD, said the driver then quickly reversed and shot down the street towards the Hilton Hotel.

“It was frightening,” said the woman, who was comforted by nearby pedestrians.

Police were called Quay St just after 8am after a report that a person was driving down the wrong side of the road and had allegedly tried to run someone over.

A woman was later arrested and is now facing charges, police said.

St John said one person was treated for minor injuries.