Well done, Victorians, you made it. Only one more sleep until Christmas.

It goes without saying – it's been said so many times before – that it has been a year like no other, and most of us are grateful that it has nearly come to an end. When the social distancing restrictions were in full force during late winter and spring, it felt like warm summer days and the Christmas season were a long way off, but for much of the time we were restricted to our homes, the light we hoped to see at the end of lockdown was a relatively normal festive season. 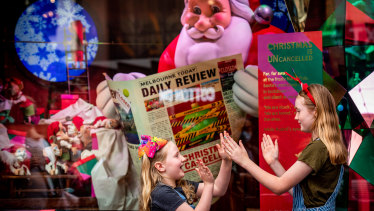 Santa catches up on the news in the Myer Christmas windows. Credit:Eddie Jim

While the Sydney outbreak and resulting state border closures have thrown the plans of many into chaos, the Christmas on offer in Victoria is, thankfully, far better than what we might have hoped for. Today should mark the 55th day of no community transmission of the virus. It is worth reflecting for a moment on what a remarkable achievement that is – one that has been achieved with the help of every single person in the state.

Such an accomplishment will allow most families and friends to gather under the one roof to celebrate Christmas Day. It will be a long time before such a simple pleasure will be taken for granted.

But for those people separated from loved ones, or who, tragically, have lost them this year, Christmas can feel simply like a time to endure. It has been a year that has focused everyone on the need to stay healthy physically and mentally.

In so many respects, we have been forced to do things differently. And while the virus has been eliminated in the community for the time being in Victoria, in the lead-up to Christmas that has not stopped us adapting to new ways of doing things.

Australian households bought more items online in the first week of December than ever before and nearly 1 million homes shopped online for the first time this year. That followed a record also set in the previous month in which Victorians spent more than 64 per cent more online than November last year. Many experts believe this will become the norm in the Christmas shopping rush.

Other of Victoria's long-standing Christmas traditions have adapted this year. Organisers of Melbourne’s Carols by Candlelight have decided to perform the concert to an empty Sidney Myer Music Bowl. Some local councils have taken a more creative approach, with the Yarra City Council creating a mobile Carols in the Park that will be moved around to various locations on the back of a truck. Thankfully the Myer windows, which were cancelled at one stage, were able to be revived. The socially distanced long lines have been a testament to their enduring popularity. With luck, all of these traditions will revert to the usual format in coming years.

These things might seem trifles compared to the challenges facing many people around the world. Many countries, deep into winter by now, are feeling the ravages of this pandemic as political leaders struggle with how to deal with the illness and death it brings. The virus has little interest in offering respite during such celebrations as Christmas, as Sydney has found. We encourage you to reach out to anyone you know who is caught in much worse circumstances.

From everyone at The Age, we wish all Victorians a very happy Christmas. We thank you for your support this year, and your trust in our journalism. We have spent more than enough time this year apart, so enjoy your time together. And for all those who are taking a break, enjoy it. It feels as if it has never been more deserved.

23/12/2020 World News Comments Off on At the end of a year like no other, Merry Christmas to all
Markets