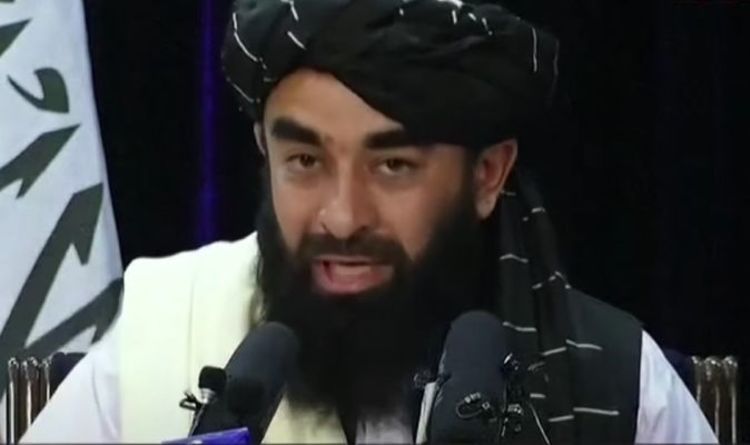 Taliban spokesman: Anything against Islam will not be accepted

Speaking at a press conference in the Afghan capital Kabul on Tuesday, the Taliban spokesman outlined how the future of Afghanistan will abide by its “national ethics” and “national tradition” under strict Sharia Law. He went on to insist “nobody will be allowed to interfere” in the Islamic interests of Afghanistan and said anything that goes “against” this doctrine will not be tolerated. His strong words come as the Taliban are set to turn the clocks back decades as women will be forced to stay at home and girls over 12 banished from attending school.

The Taliban spokesman said: “Islam is important in Afghanistan and anything against Islam will not be accepted!

“All will have rights under the umbrella of Islam.”

And in a bizarre claim, he added: “We want the world to trust us so we can work for the betterment of Afghan people.

“Afghanistan has got some national ethics, national tradition.”

But in a stark warning, Mujahid said: “And nobody will be allowed in Afghanistan to interfere in these things.”

The Taliban’s previous rules were based on a strict interpretation of Sharia.

Women’s access to education and work was curtailed previously and public punishment including stoning to death and executions were commonplace.

The group denies that it wants a return to this kind of governance in Afghanistan stating it seeks a “genuine Islamic system” in Afghanistan.

But witnesses insist now the Taliban has returned to rule Afghanistan they are already being introduced across areas under its control.

It comes as the Taliban has not ruled out a return of strict punishments and executions in Afghanistan.

Previously, Suhail Shaheen, a spokesman for the Taliban in Qatar, did not dismiss the possibility of the return of stonings, cutting off the hands and feet for punishment, as well as public executions.

He told the BBC: “I can’t say right now, that’s up to the judges in the courts and the laws. The judges will be appointed according to the law of the future government.”

The group also banned television, music and cinemas. The BBC reported on Tuesday how public music in shopping malls has already been switched off following the takeover of the Taliban in Kabul.

Books and non-Islamic relics were also destroyed, including the Bamiyan Buddha statues in central Afghanistan in 2001.

The Taliban took control of Afghanistan at lightning speed in recent weeks as the government fled and the army retreated, their arrival in Kabul prompted a panic evacuation effort by western nations as they scrambled to get citizens out of the country on military jets amid chaotic scenes at Kabul airport.

17/08/2021 World News Comments Off on ‘Anything against Islam will NOT be tolerated!’ Taliban lays down law after seizing power
Markets