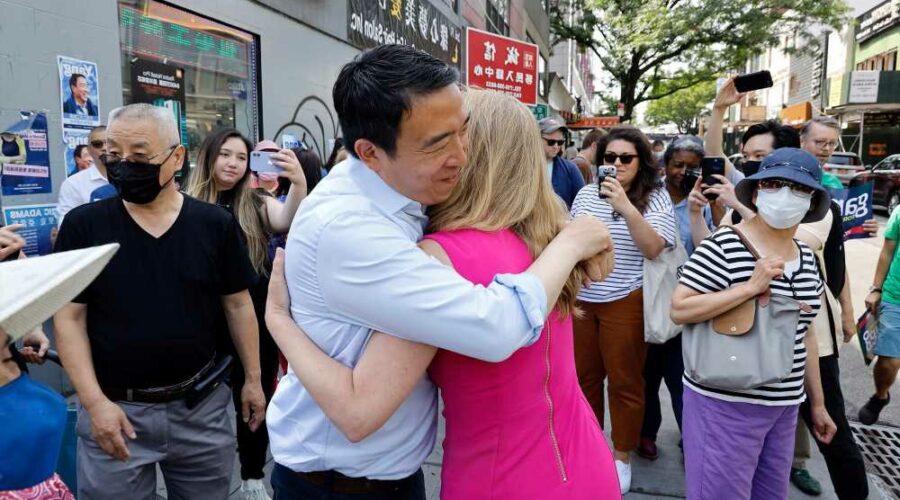 Not Maya from the block: Inside Wiley’s life of elitism and wealth

After de Blasio, NYC must elect a crime-fighting mayor — or expect disaster

Andrew Yang formally endorsed Kathryn Garcia for mayor — as his second choice — as the two candidates campaigned together in Flushing on Saturday.

“Kathryn Garcia is a true public servant. She’s worked on behalf of New Yorkers for years. She wants to improve the lives of every single one of us,” Yang said. “Anyone listening to my voice right now: If you support me, you should rank Kathryn No. 2 on your ballot.”

Garcia, oddly, did not return the favor.

“Let me be very clear: I’m not co-endorsing,” she added when asked to clarify. “We are campaigning together, we are promoting rank-choice voting. I certainly do not agree with everything that Andrew has said.”

The two have been struggling in recent polls as Brooklyn Beep (typo?) Eric Adams continues to lead the race for Tuesday’s Democratic primary, and the rivals found themselves in an unprecedented joint campaign event as they both looked to grab votes in the new ranked-choice voting system.

Adams began his day in The Bronx with Borough President Ruben Diaz. Just days before, the borough saw yet another horrific spasm of violence when a masked gunman opened fire in broad daylight as terrified children ran in fear.

From there, Adams continued on a lighter note with a noontime Juneteenth “Freedom Ride” at the Brooklyn Museum.

“We fought for the reform that you are continuing today. Don’t let anyone sidetrack you,” Adams told a cheering crowd. “Stay focused, stay committed and grind for the change you are looking for.”

Maya Wiley, who is trying to consolidate the city’s progressive vote, has been buoyed in recent weeks by high-profile endorsements from Rep. Alexandria Ocasio-Cortez and Public Advocate Jumaane Williams. She campaigned early in Queens with State Sen. Mike Gianaris and Former Secretary of Housing and Urban Development Julián Castro at the Sunnyside Greenmarket.

Wiley said no dice to joint campaigning with her rivals.

“I was offered the opportunity to campaign with Andrew and Katherine. I couldn’t do it because I’ve spent this entire campaign focused on how we serve people who are mentally ill, recognized that they have value and that they have human rights and that they deserve services and support,” Wiley told reporters, taking a shot at Yang’s less than artful remarks about mentally ill New Yorkers during their most recent debate.

“And after I heard the comments that Andrew made at the debate I could not stand up for those comments,” she said.