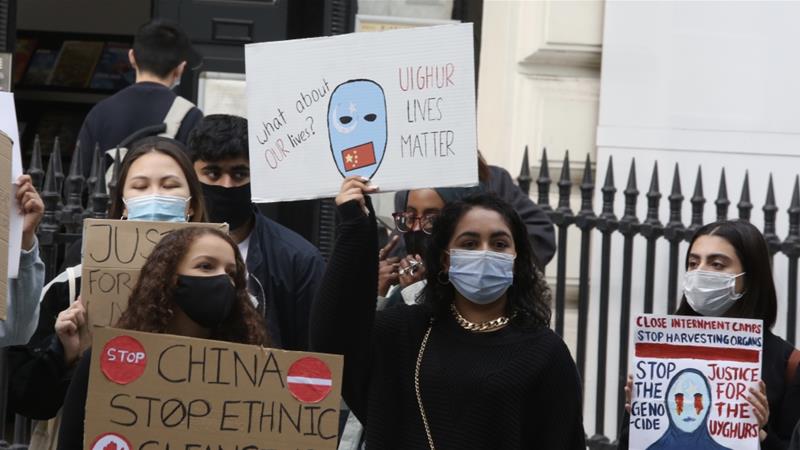 Nearly two dozen activist groups have said a genocide is taking place against mostly Muslim Uighurs in China’s remote Xinjiang region, where a reported one million people are held in camps.

In an open letter signed by groups including the United States-based Uyghur Human Rights Project, Genocide Watch and the European Centre for the Responsibility to Protect, on Tuesday called on the United Nations Human Rights Council (UNHRC) to launch an investigation.

Sixteen individuals, including academics from US and European universities, co-signed the letter, which said there was “mounting evidence” that “crimes against humanity and genocide are taking place” in Xinjiang.

“Under the guise of curbing religious and political extremism, the Chinese government has intensified widespread and systematic policies to repress Uighurs and other Turkic peoples on the basis of their religious and ethnic identities,” said the letter.

“The atrocities include arbitrary detention of between 1 and 1.8 million people in internment camps, a widespread program of political indoctrination, enforced disappearances, destruction of cultural sites, forced labour, disproportionate rates of prison incarceration and coercive birth prevention campaigns and policies.”

China says the camps are vocational education and training centres as part of a “counterterrorism and de-radicalisation measures”.

Under international law, crimes against humanity are defined as widespread and systematic, whereas the burden of proof of genocide – the intent to destroy part of a population – is more difficult to prove.

The groups said China’s measures “meet the threshold of acts constitutive of genocide” under the Genocide Convention, which bans imposing measures intended to prevent births among an ethnic or religious group.

The open letter adds to the international pressure building on China’s ruling Communist Party over its actions in the resource-rich region.

On Monday, the European Union pressed China to let its independent observers into Xinjiang, binding human rights to future trade and investment deals with Beijing.

In response, a Chinese foreign ministry spokesman on Tuesday said the bloc was “welcome” to visit the area “to truly understand the real situation and not rely on hearsay”.

“The EU has raised their desire to visit Xinjiang, China has already agreed and is willing to make arrangements,” Wang Wenbin said.

China has rebuffed past calls to grant independent access to Xinjiang, and the spokesman did not confirm whether EU observers would be allowed to travel freely in the region.

UN human rights chief Michelle Bachelet on Monday said she was discussing a possible visit to Xinjiang with Chinese authorities who are facing a growing backlash over the treatment of the ethnic Uighurs.

But activists voiced disappointment in her speech to the Human Rights Council, where China has never been the object of a resolution.

“Bachelet’s remarks on China say nothing of substance – no word about the human costs of China’s rights violations, including against Uighurs and in Hong Kong, nor the ongoing concerns about free expression, arbitrary detention and crackdowns on civil society,” Sarah Brooks of the International Service for Human Rights told Reuters news agency.

“Instead, the remarks speak volumes about the weak position of the human rights office vis-a-vis China.”

Also on Monday, the US shelved plans for a broad import ban on cotton and tomato products from Xinjiang while announcing narrower bans on products from five specific entities.

The US Department of Homeland Security said the new “Withhold Release Orders” on cotton, textiles, apparel, hair products and computer parts are aimed at combatting China’s reported use of forced labour by imprisoned Uighur Muslims in Xinjiang.