A rescue mission is under way to find 400 people trapped by rising floodwaters inside the Lismore CBD, with severe weather and thunderstorms forecast on Monday evening further hampering their efforts.

A flotilla of SES craft, privately owned fishing boats and jet-skis are raking across the submerged city, retrieving people from the tops of houses and commercial buildings, and trying to identify those trapped inside roof cavity spaces.

Orders have also been issued for residents to evacuate downstream of nearby Rocky Creek Dam, with the spillway now open. Safety engineers have been inspecting the dam, the main drinking water supply 20 kilometres north of Lismore.

The high rainfall has caused the Lismore levee to overrun early on Monday morning, while flood levels above the 1974 peak and 1954 levels are occurring in the city. The highest flood on record peaked at 12.46 metres in 1890.

Lismore mayor Steve Krieg said the latest forecast peak was for 14.4 metres. However, he said no one knew when the waters would stop rising, with water entering the downhill areas of the Lismore Base Hospital precinct, Lismore Shopping Square and St Carthage’s Cathedral.

He said hundreds of residents were still trapped by the rising water. “Worst-case estimate: we believe there are 400 residents that need to be rescued from inside Lismore city,” he said.

On Monday afternoon, Mr Perrottet stressed that people in the areas of warning should “begin preparing and planning for evacuation in these areas where there is an evacuation warning in place”.

Minister for Emergency Services and Resilience Stephanie Cooke said the flooding that Lismore and surrounding areas were experiencing “is a natural disaster of unprecedented proportions”.

The minister announced that there were “four aircraft that are very keen to get up in the air and start down-the-wire rescues” once conditions eased.

The flooding in NSW’s north came as Queensland’s floods claimed the lives of eight people, after a man and his dog were found dead in a submerged vehicle on the Gold Coast on Monday. 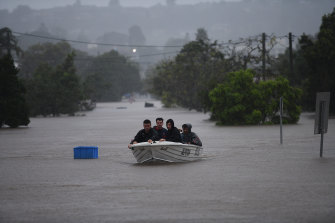 Residents try to evacuate the areas around Lismore as the flood begins to rise on Monday morning.Credit:Elise Derwin

Meanwhile, a man is feared dead in Lismore after NSW Police officers on Sunday saw him calling for help but quickly lost sight of him, fearing he may have been washed down a drain.

Lismore residents were forced to leave their homes after the NSW State Emergency Service ordered all citizens to evacuate before 5am on Monday morning due to “extremely dangerous” floods.

“For the safety of YOU and your FAMILY please evacuate the township NOW!” the Richmond police district said on its social media pages.

Residents woke to the sounds of sirens as Lismore’s levee was breached after being hit with 406mm of rain between 9am on Sunday and 4am on Monday.

Evacuation orders remain in place for several areas across northern NSW, including parts of South Murwillumbah, Kyogle, Mullumbimby and Coraki, with the town of Casino also told to prepare for evacuation.

NSW Police also declared Lismore CBD off-limits to all pedestrians and vehicles after being “inundated” with water.

The floods in the region were “unprecedented”, the weather bureau’s senior meteorologist Jackson Browne said, with rainfall on Monday breaking the town’s weather records.

By noon on Monday, the Wilsons River at Lismore had reached 14.2 metres – almost two metres above the previous 1954 record of 12.27 metres, according to Weatherzone forecaster Ben Domensino. 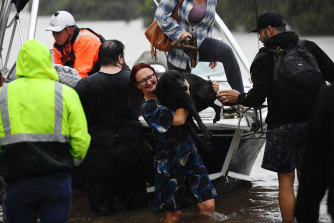 Nobody gets left behind: residents and their pets are taken to Lismore’s evacuation centres. Credit:Elise Derwin

Meanwhile, a rain gauge to the north of Lismore recorded the second-highest daily rainfall total on record in NSW. Dunoon, a small village located roughly 20 kilometres north of Lismore, registered 775mm of rain during the 24 hours to 9am on Monday, Weatherzone said, adding that the observation would need to be quality controlled by the Bureau of Meteorology before it could be confirmed.

The deluge was the second-highest daily rainfall total ever officially observed in NSW, beaten only by 809.2 mm at Dorrigo in February 1954.

The Bureau of Meteorology’s Mr Browne said the floods in northern NSW and in south-east Queensland were “biblical in nature”. Lismore recorded 181mm of rain in 30 minutes to 9.15am alone.

“It’s just a massive amount of water that’s just come through,” he said. “There’s nothing in the record books like it.”

The silver lining was the fact the weather system creating the floods was set to move off the coast in the coming days, Mr Browne said. “We might still have some lingering impact after that, showers and storms but nothing biblical in nature like what we’ve seen.”

‘A tragedy unfolding in front of our eyes’

Driving in his car after assisting residents out of the water, Cr Krieg described the situation to the Herald as “a tragedy unfolding in front of our eyes”.

Cr Krieg said the town’s limited resources meant residents were relying on civilian boats to be rescued from the dangerous conditions – and just two SES boats were available.

“It is unbelievable,” he said.

“You just can’t picture what we are seeing here. This is seriously life-threatening. There are hundreds of people trapped.”

Cr Krieg said has been inundated with calls from residents desperate to be rescued.

The sheer number of calls being made to the NSW State Emergency Service meant some were going unanswered, he said.

On the Lismore SES Facebook page on Monday morning, multiple people said they were trapped and were pleading to be rescued.

One person said they were on a rooftop in North Lismore, “3 people and a dog. Can’t get thru on phone. We are in the roof … it has a window onto the roof”.

Another person posted that a family needed help in South Lismore. “They’re on their roof gable with two little girls and dog. They are running out of roof very fast.”

Another woman posted that her dad was “in chest deep water in his house … and can’t get out of his house. Please Help.”

Lismore resident Lucy Vader took to her Facebook page in a desperate plea as she waits on her roof for assistance.

As the situation continues to worsen in the area, the Northern Rivers NSW State Emergency Service issued a plea for patience when it came to the surge of requests on Monday morning.

“If you drop out, please try again and if the situation is life-threatening, hang up and dial 000,” the local SES wrote on its Facebook page.

“The situation in Lismore and surrounds is extremely dangerous and rapidly evolving. NSW SES continues to receive requests from residents to assist with evacuations.”

“The water is still rising, my dog is stuck inside the house,” she says in a video posted to Facebook.

Crelleain Robertson, another Lismore resident, also took to social media in a desperate plea for her two neighbours who were trapped inside their home.

“No roof access and tin roof, and they have stopped responding,” she wrote.

“Anyone with a boat can you please go check.”

A number of residents with boats were coming to the aid of others who were trapped by flooding.

Lismore resident Donna Walker and her family of five evacuated their home at 10.30pm on Sunday, taking only their camping gear as they headed for the Southern Cross University evacuation centre.

“We lost everything. But all the family is out – that is really important, all possessions can be replaced,” she said.

The centre is housing about 500 people at the moment, along with cats, birds and dogs. The power has been cut off at the centre, so evacuees have been trying to fill the time however they can.

Manager of Lismore’s paint centre, Laura Durheim, said she was in awe of her community after strangers – along with the local rugby club – turned up in droves to assist the shop to move hundreds of paint buckets out of it on Sunday night.

Queensland Premier Annastacia Palaszczuk compared the floods in her state to ex-cyclone Oswald in 2013 and ex-tropical cyclone Debbie in 2017.

Two people are now missing in the floods in Queensland – a man who fell in the Brisbane River last week and a man who went missing near Esk, about 114 kilometres from Brisbane.

“No one has seen this amount of rain in such a short time in our entire south-east catchment zone.”

The Queensland Premier said the Brisbane River peaked just below four metres on Monday morning – at 3.85 metres. The peak in 2011 was 4.46 metres.

There were 2200 requests for assistance and 113 water rescues around the Gold Coast, Beenleigh and Brisbane areas. More than 1500 people were in evacuation centres.

28/02/2022 World News Comments Off on ‘A tragedy unfolding in front of our eyes’: Estimated 400 still trapped in Lismore flood
Markets