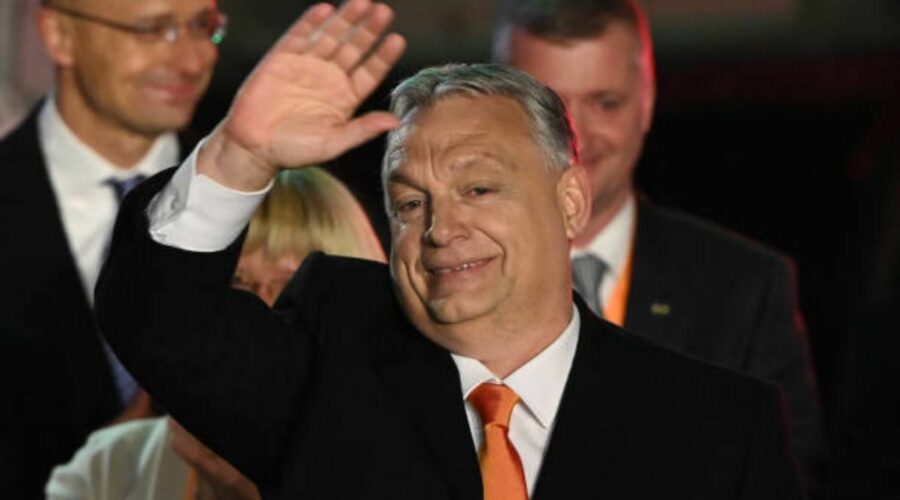 The Hungarian Prime Minister described the oil ban as a “nuclear bomb” for the central European nation and has managed to hold up the final decision by asking for extra time to phase out the imports.

While the bloc has already offered Mr Orbán an extra two years to phase out Russian oil, he has called for five years and a significant amount of EU funding before going ahead with the plan.

Due to the EU’s rules that decisions such as these require the agreement and cooperation of all 27 member nations, the bloc is unable to press forward without Hungary’s support.

A former Hungarian official described Mr Orbán as a “player” with a “powerful card” when it comes to his political approach.

They said, according to Politico: “Viktor is a player, he now got a powerful card.”

The Hungarian government has been softer in their dealings with Putin in the wake of the Ukraine invasion, having approved of sanctions against Moscow but refusing to send arms to Kyiv.

He has also allowed state-owned media to promote Russia’s version of events on the war.

This policy has further isolated him from the EU, including his right-wing nationalist ally in the bloc Poland.

The EU and Mr Orbán’s government have clashed over his reported “eroding of Hungary’s democratic standards”, reported Politico.

Last month the bloc triggered a process which could cut essential funds to Budapest over these “rule-of-law deficits”.

Péter Krekó, director of the Political Capital Institute think tank in Budapest, said the Hungarian Prime Minister is now in a more “complicated diplomatic environment than ever before”.

While Mr Orbán has now won four consecutive terms in office, although there are claims the campaign was not conducted fairly, he is losing right-wing allies in Europe.

As well as deterioration in his relationship with Poland over his more generous stance on Russia, his Slovenian ally Prime Minister Janez Janša lost a parliamentary election last month.

Mr Orbán was also a supporter of Marine Le Pen, who lost the French presidential election in April to incumbent Emmanuel Macron.

He had been trying to nurture a stronger relationship with Putin before the war broke out, putting Budapest in an even more isolated position over the past two months.