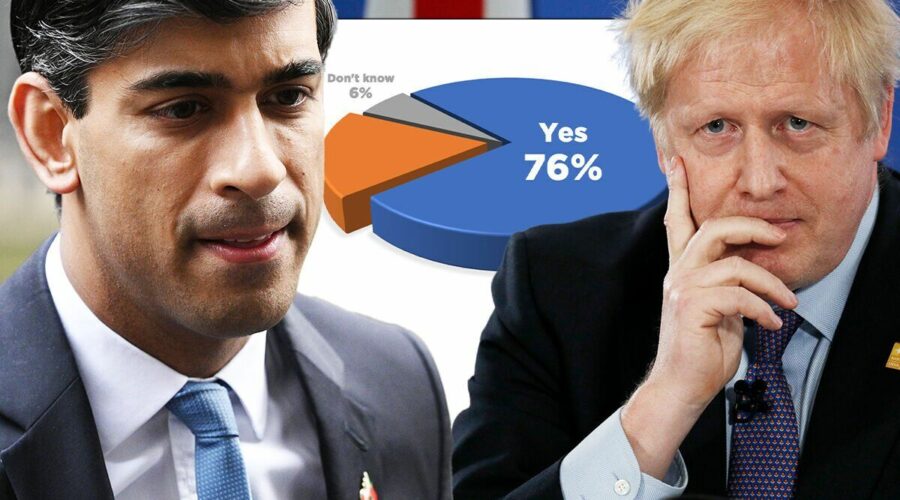 An exclusive poll for Express.co.uk, conducted by Techne UK between May 18 and May 19, showed that 76 percent of those polled think the rise should be scrapped amid the escalating cost of living crisis. The tax rise will come into effect in 2023, implemented through a 1.25 percent increase to National Insurance contributions. This comes as the country battles a mounting cost of living crisis, with the Bank of England forecasting that the UK will see double-digit inflation and a 1 percent contraction in the size of the economy later this year.

Earlier this week, inflation surged to 9 per cent – its highest level in 40 years.

When asked “Should the national insurance rise be scrapped to help tackle the cost of living crisis?”, just 18 percent of the 1,624 adults polled answered “No”.

The numbers were even more worrying for the Treasury among Conservative voters, with 82 percent saying the increase should be scrapped.

Just 12 percent of Conservative voters polled thought it should remain in place.

The Lib Dems saw a similar result, with 80 percent agreeing it should be scrapped.

There was not a major difference in sentiment between different age groups, with the results showing just a 2 percent difference between pensioners and those aged 18 to 34.

A total of 79 percent of pensioners want to get rid of the tax rise, while 77 percent of those aged 18 to 34 would do the same.

The MP for North West Leicestershire said the National Insurance increase will “exacerbate the cost of living crisis”, describing it as “the wrong tax at the wrong time”.

He said: “I have little confidence that the extra money for the NHS will deal with the backlog or that it will ever be in a position to move those funds to social care in the future.

“That’s something I said before the Labour party got onto it.”

Mr Bridgen explained: “We know that when we dropped the rate of corporation tax we got more tax in.

“How can anyone think that by raising tax, we’re going to get more tax in? We’re not.

“Over the last 12 years we’ve dropped corporation tax and got more tax in.

“And now they think that by raising it we’re going to get more in. Not going to happen.

“Generally, the higher you put taxes the less money you get in.”

Meanwhile, Conservative MP Mel Stride, chair of the Treasury Select Committee, described the current pressures on the cost of living as “extraordinary”.

He told Express.co.uk that he is “not surprised” that the tax rise is “unpopular”, as it will “hit workers and employers alike”.

He added: “I have been arguing for some time that it should be scrapped for at least a year, as we work our way through the extraordinary cost of living pressures.”

Speaking to Express.co.uk after the Queen’s Speech earlier this month, which included no plans to scrap the hated social care tax, Tory MP Peter Bone described it as a “disincentive for people to take on employees”.

Taking a similar stance to Mr Bridgen, the veteran Conservative backbencher added: “I think the Chancellor should be looking at all sorts of ways to get the economy to grow and that’s the key.

“Because we need to have the economy growing and more people in work.

“Because if you have more people in work, even if tax rates are lower, you finish up with more tax taken.”

I have been arguing for some time that it should be scrapped for at least a year, as we work our way through the extraordinary cost of living pressures.”

22/05/2022 Politics Comments Off on ‘Wrong tax at wrong time!’ Boris and Rishi in crisis as public demands tax rise be axed
Markets