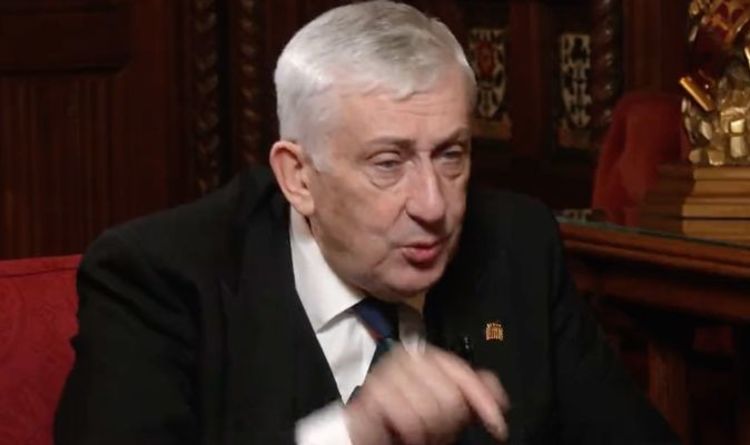 Speaking to GB News in an interview due to be aired on Saturday, Sir Lindsay told Alastair Stewart that he stands by comments made by himself that the House of Commons has become “secondary once again to TV news” as he claimed MPs are more concerned about soundbites on news stations than as their roles as MPs.

He told Mr Stewart this was not acceptable and vowed to keep the focus on Westminster in his role as Speaker.

In a frank observation, Sir Lindsay said MPs are elected to serve the House and not “Sky News or GB News”.

He added: “They were elected to come into this House, to listen to Ministers and Prime Ministers making the statements here.

“Because in the end, their constituents sent them to this House.”

JUST IN You okay Nicola? Moment Sturgeon explodes at journalist ‘Yeah that would really help!’

He added that “quite rightly this House must hear it first, and that is why it is a challenge” that MPs have too often used news channels to make announcements and comments which he believes belong in the House of Commons.

But asked what he meant by the term “playing hardball” with MPs, The Speaker suggested “time will tell”.

Lindsay Hoyle says he 'won't be undermined' by Johnson

“If you want to take this House, and you want to disregard what I expect you to do, do not be upset when certain decisions will be taken.”

He warned MPs that he is prepared to roll out “more and more” Urgent Questions of Ministers and Members if MPs, including the Prime Minister, continue to make announcements, such as the launch of the booster campaign, without discussing them with the Commons first.

Sir Lindsay claimed he does not “fall out with people” insisting that he wants to “work with people” on the issue to come to a solution.

While the Speaker acknowledged that he is independent, he noted he is “the voice of all those MPs” and stands in the best interest of the House of Commons and democracy.

Sir Lindsay Hoyle has been Speaker of the House of Commons since 2019, when he replaced former speaker John Bercow.

He has been MP for Chorley since 1997, but gave up his ties to the Labour Party to be an Independent MP for his role as Speaker. He was knighted in the 2018 New Year Honours list for services to politics.

17/12/2021 Politics Comments Off on ‘Work against me, I’ll work against you!’ Hoyle vows to keep playing ‘hardball’ with MPs
Markets