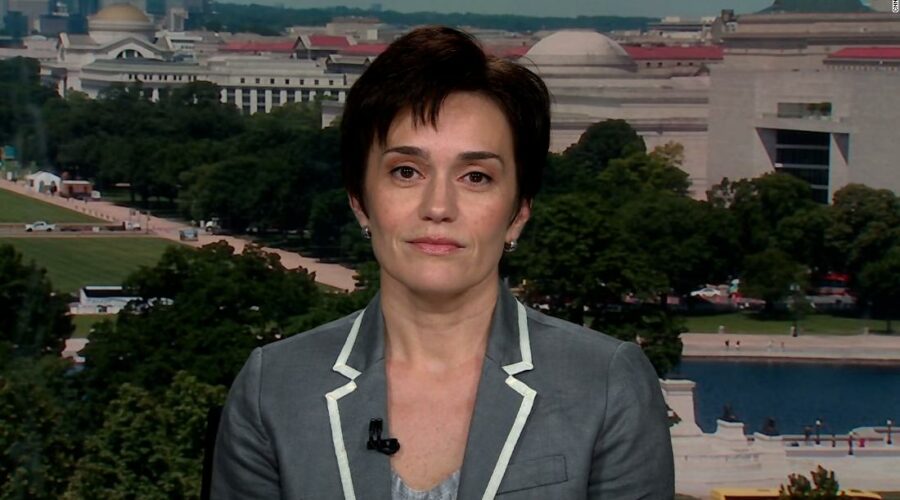 New York (CNN)Writer Vladimir Kara-Murza is an outspoken critic of Vladimir Putin. He has made numerous television appearances, including one on CNN, denouncing the Russian president’s “regime of murderers.” Criticizing the Kremlin comes at a high price, and on the heels of that interview in April, Kara-Muzra was arrested and is still behind bars.

But his detainment has not kept him silent. Kara-Murza, who is also a contributing columnist for The Washington Post, published an essay last week after his lawyer carried the text out of prison for him.
In the op-ed, Kara-Murza thanked his wife, Evgenia, for her support.

On “Reliable Sources” Sunday, Evgenia said her husband was originally sentenced to 15 days in prison for disobeying police orders. He was supposed to be released April 26, but on April 22, more charges were initiated against him, based on the country’s new law that effectively criminalized fact-based reporting on the war in Ukraine. By calling that conflict a war, Vladimir now faces a 15-year prison sentence.

The couple have long been aware of the risks of speaking out. Kara-Murza was poisoned in 2015, the same year Boris Nemstov, an outspoken critic of Putin, was assassinated.

“It would be quite hypocritical of me to try and dissuade my husband from going back to Russia,” Evgenia said. “He believes in what he’s doing.”
Kara-Murza has worn many different hats over his career — politician, author, historian and journalist.

Though he has always seen himself as a politician, Evgenia said, journalism is important to him as a means to speak truth about what is happening.
“(Journalism) is a way to provide people with objective information, about truth,” Evgenia said.
The couple have three children, two of whom are teenagers.
“We’ve never tried to hide the truth from the kids,” Evgenia told CNN chief media correspondent Brian Stelter. The kids are online, she said, and aware of what’s happening in the world even if their parents did choose to hide it.
“They are of course very worried for the father safety, and they want him home,” Evgenia said. “He’s not a politician. He’s not a journalist nor historian. He’s their daddy.”