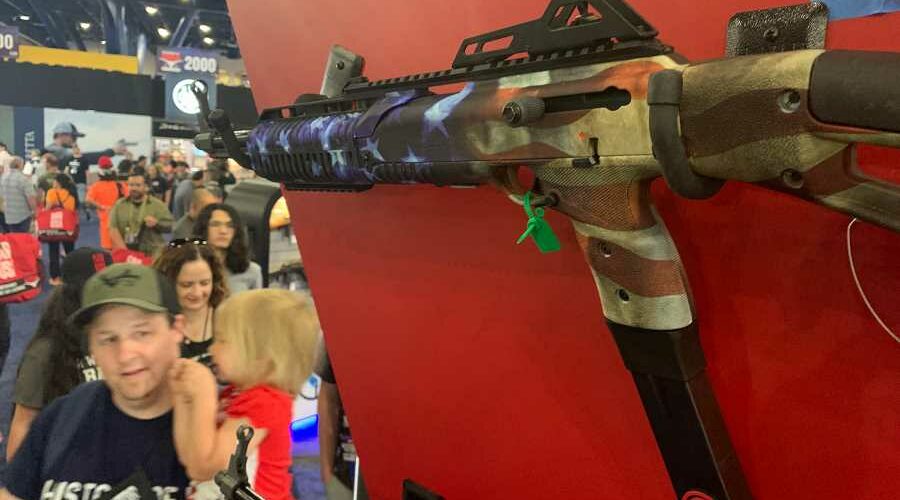 HOUSTON: The National Rifle Association bills its convention hall as “14 acres of guns & gear.” But the hall is less than 300 miles away from Uvalde — where 19 elementary school students were murdered at a “hardened” school by a lone gunman with an AR-15, while “good guys with guns” reportedly stood down for nearly an hour — and the convention lineup is shrinking.

The big-name musical acts, including Don “American Pie” McLean and Lee “Proud to Be An American” Greenwood, have bowed out of the “NRA Grand Ole Night of Freedom” concert scheduled for Saturday. Top Texas politicians including Rep. Dan Crenshaw, Sen. John Cornyn, and Gov. Greg Abbot will no longer appear in person — although Sen. Ted Cruz and Donald Trump are still slated to speak later today.

'Please Send the Police Now': Multiple Kids Made 911 Calls While Gunman Was Inside Uvalde School

Uvalde Survivor, 11, Says She Covered Herself in Classmate's Blood and Played Dead During Shooting

While flags are flying half-mast on buildings downtown, inside the massive Houston convention hall, there’s little sign that a national tragedy has occurred. There are tattooed men in “Let’s Go Brandon” T-Shirts milling among older couples with “Trump 2024” gear — and even a few families pushing around babies in strollers. The main floor of the convention hall is a gun show, featuring precision “takedown rifles,” Make America Great Again high capacity magazines, and endless varieties of the AR-15 platform rifle, used in both the Uvalde and Buffalo attacks. A Black Rifle Coffee stand is serving up “AK Espresso.”

For the troubled NRA, Houston was supposed to mark the stirrings of a comeback — a big, 150th anniversary meeting, celebrated a year late due to the pandemic.

But that was always a doomed aspiration. The specifics might have varied, but when you’re an organization that exists to defend the tools for mass shootings in a country that has them on a daily basis, your convention will always coincide with ugly reminders of who you are and what you do.

The NRA’s leaders seem to have made their own peace with that, but they’re having far more trouble keeping the peace with each other. The last in-person annual meeting in Indianapolis, in 2019, saw NRA CEO LaPierre fend off a coup attempt by then president Oliver North, amid dueling claims of mismanagement and corruption. That power struggle reflected long-simmering acrimony between the NRA proper and its then-longtime PR firm, Ackerman McQueen, which quietly masterminded LaPierre’s attack-dog public image and ran the now shuttered NRATV, where North had a show. The NRA sued Ackerman for $40 million for damaging the NRA’s image; Ackerman countersued for $100 million on similar grounds.

As legal filings and whistleblowers surfaced allegations of corruption, New York attorney general Letitia James pounced, with a lawsuit that could still lead to the ouster of the NRA’s senior leadership, over claims they enriched themselves at the expense of what’s supposed to be a charitable organization. (Wayne LaPierre has since paid back $300,000 in excess compensation. In IRS filings, NRA has accused its former top lobbyist Chris Cox of raking in an illicit $1 million.)

In an attempt to skirt New York prosecution, the NRA made an abortive 2021 bid to declare bankruptcy and reincorporate in Texas. While that legal Hail Mary fell short, the NRA did get a reprieve recently, when a judge ruled against James’ attempt to dissolve the NRA’s charter.

The NRA and Ackerman fight was quietly resolved in a settlement in late April of this year, just as the case was about to go to trial; terms of that deal were not disclosed. But as its legal bills have ballooned, the gun lobby’s prodigious sway over national elections has diminished. Its independent political spending shrank from $54 million in 2016, to less than $30 million in 2020.

But while it finds itself unusually vulnerable, the NRA remains a political powerhouse. It has inculcated a generation of right-wing single-issue gun voters, and continues to build bridges with extremist groups. (An Oath Keeper from Idaho now sits on its board). Guns remain one of the most potent tribal symbols for the MAGA set, especially during primary season. This year alone guns have featured in more than 100 GOP political ads.

Fear of the wrath of gun voters — and the NRA that whips them into a fury — has cowed an entire political party into inaction, with Republicans unmovable on popular gun control measures like background checks, even as the nation prepares to bury 19 children and two of their teachers, slaughtered by an 18 year-old firing a weapon of war.

27/05/2022 Politics Comments Off on Where There Should Be a Memorial, the NRA Is Still Trying to Throw Itself a Party
Markets