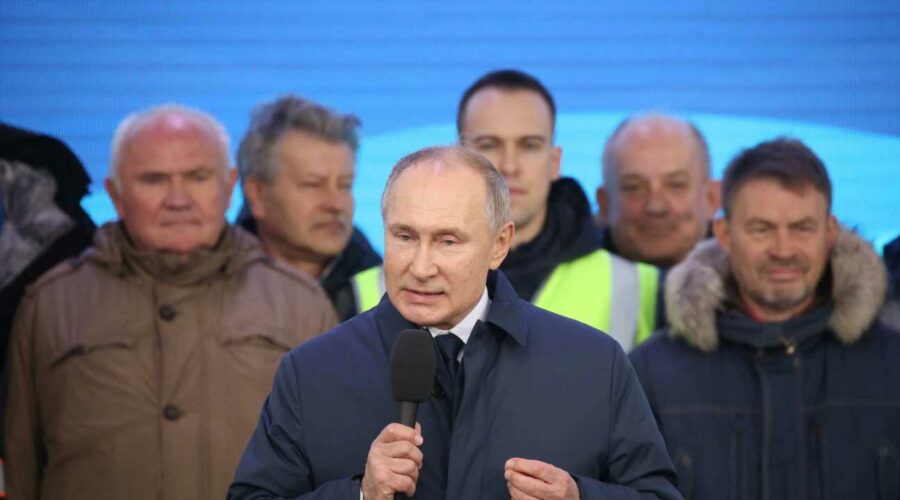 Improving Russian citizens' living standards is President Vladimir Putin's biggest concern right now, he told CNBC on Wednesday, offering a rare insight into the preoccupations of one of the world's most powerful leaders.

"Our main problem, our main issue and goal is to increase the revenues of our citizens," Putin told CNBC's Hadley Gamble on Wednesday. His answer came after being asked what his greatest concern was today, be it inflation, stagflation or the gas crisis in Europe or tension in the South China Sea.

"This is our main challenge … we need to ensure economic growth and to increase its quality. These are our long-term tasks," he said.

Putin added that the government was "going to improve the social situation to increase the revenues of our citizens and to deal with the second very important task is the demographic situation. And it entails a lot of social issues, healthcare, education, supporting families with children."

"So these two very important issues, [the] demographic one and increasing the revenue of our citizens and improving their quality of life … should be solved on the basis of economic growth. That's what we are going to do in the near future," he said.

His comments come as Russia's GDP per capita, a core indicator of economic performance and commonly used as a broad measure of average living standards or economic wellbeing, remains below its peers in the OECD and EU.

Chris Weafer, chief executive officer of Moscow-based strategy consultancy Macro-Advisory, told CNBC in September that "the real issue which scares the Kremlin is the changing demographics," with an increasing number of Russians born after the Soviet Union ended and demanding a better standard of life.

″[They] want improved lifestyle, incomes social supports and a better future for themselves and their families," Weafer said. "The big challenge for President Putin and the so-called Russian 'elites' will be how to satisfy those expectations while keeping power. Failure in the former will more severely undermine to latter in the next presidential term – no matter who that president may be."

During his two decades in power, Putin has undoubtedly overseen a period of growth in the Russian economy. Likewise, on the political front, Russia still stands firmly on the global geopolitical stage.

Like any economy, however, Russia has not been immune to global and domestic events — both under and out of Russia's control — that have unseated its growth trajectory and caused financial hardship to its citizens.

President Putin on Taiwan: ‘China does not need to use force’

This was most evident in 2014 when a fall in global oil prices, combined with Russia's decision to annex Crimea from its neighbor Ukraine, put massive pressure on the economy and society. This was due to lower government revenues for oil-exporting Russia and newly-imposed international sanctions on the country for its Crimea land grab. The big decline in the ruble led to rampant inflation and prices on basic products soared, seriously affecting Russian consumers.

Most recently, the Covid-19 pandemic also hit Russia's economy as hard, although it fared better than some developed economies. The World Bank noted that Russia's gross domestic product (GDP) fell by 3% in 2020, compared to contractions of 3.8% on average globally, and 5.4% in advanced economies.

Still, the pandemic remains a serious public health crisis in the country with cases high and vaccinations sluggish; on Wednesday, Russia reported its highest daily death toll since the start of the pandemic, breaking a previous record on Tuesday.

Economists at the World Bank forecast last week that Russia's GDP would expand by 4.3% in 2021, before slipping back to grow by 2.8% in 2022 and then 1.8% in 2023 as the output gap closes. The Bank noted that "a continued global economic recovery, relatively high oil prices, and an improved Covid situation are expected to help consolidate the incipient recovery in domestic demand."

Does the public want Putin?

President Putin refused to be drawn on whether he will run for office in 2024, although Russia's constitution was changed in 2020, controversially, in order to allow him to do so.

If he does run for re-election (with a win all but guaranteed unless there is seismic change in Russia in the next few years, given the oppression of opposition parties and politicians, like the jailed Alexei Navalny) then Putin, who's now 69, could potentially be in power until 2036.

Asked if he had a succession plan on Wednesday, Putin said "I prefer not to answer such questions, this is my traditional response. We will wait until the upcoming elections for that."

"The conversation in this regard is to stabilize the situation. The situation must be stable and safe in order for power structures and world structures to work safely and responsibly," he said.

Geopolitical events both at home and abroad have led to Putin's popularity fluctuating widely since 1999, according to polls conducted by the independent Levada Center.

When Russia annexed Crimea, Putin's popularity soared from 61% to 85%, for example, but since then his ratings have steadily declined to their current level, of 64% in September.

Whether Russians believe Putin can solve the country's internal problems, or should stay in power after 2024 is another matter.

Levada's latest survey on Putin's standing with the Russian people, of 1,634 adults in late September with the results released this week, showed that 47% of Russians would like to see Putin remain as president after 2024, while 42% do not want that — the highest rate since 2013.

Putin's preoccupation with growth and its trickle-down effect on ordinary Russians was just one of the topics he discussed with CNBC at Russian Energy Week on Wednesday. The president also commented on a wide variety of pressing matters, from Europe's gas crisis to the outlook for oil prices, as well as rising tensions between Russia's ally China (President Xi Jinping once said Putin was his best friend) and Taiwan.

Russia is an influential force in both Europe and Asia given its position as a global oil and gas exporter, although in recent years Putin has spoken of the need to diversify Russia's economy away from its reliance on energy exports, an objective that has been prioritized after the 2014 oil price crash.

14/10/2021 Politics Comments Off on What is Putin's greatest worry right now? His own citizens
Markets