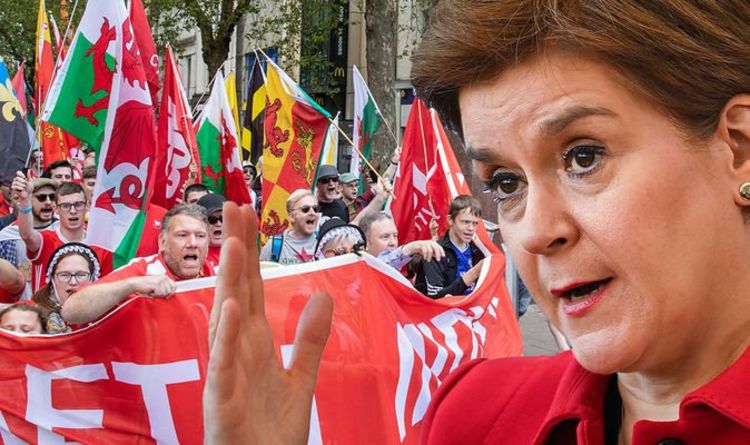 Ms Sturgeon’s Scottish National Party (SNP) was given a slight boost this week as a new poll found that support for independence has marginally risen. The nationalists were predicted to gain five seats in the House of Commons, which would take its total to 53, if a UK General Election was held now. The Panelbase survey was based on the responses of 1,781 voters in Scotland who were asked about their views on independence between November 9 and 12.

However, despite support for Scottish independence rising by one percent, the No campaign is still two percentage points ahead, according to the survey, which was conducted for the Sunday Times.

Amid a slight rise in support, the SNP’s campaign for an independent Scotland may be being used as an example for another of the devolved nations to break away from the UK, according to a member of the Welsh Senedd – or Parliament.

Rhys ab Owen, from Wales’ pro-independence Plaid Cymru, told Express.co.uk how his party could draw on the experiences of the SNP after it failed to convince Scots to vote Yes at the 2014 referendum.

He said: “We can look, we can learn lessons, how they for example took advantage of the surge of support towards the SNP after the first failed referendum.

“We’ll be able to learn lessons from how Nicola Sturgeon has done things differently in Scotland.”

JUST IN: EU on brink: Brussels braced for explosive talks with Switzerland after ‘Brexit moment’

While Ms Sturgeon may be feeling confident about her party’s election chances after the latest poll, the SNP leader has been under pressure recently.

Scotland’s First Minister was criticised over her appearances at the COP26 climate change summit in Glasgow.

Although Scotland hosted the UN conference, as a devolved leader, Ms Sturgeon didn’t have a seat at the negotiating tables with UK Prime Minister Boris Johnson and other world leaders.

However, Ms Sturgeon still posed for pictures with world leaders, including US President Joe Biden, as well as other famous faces such as Swedish environmental activist, Greta Thunberg.

The First Minister’s series of photo opportunities was seized upon by critics, who urged her to instead focus her attention on improving Scotland’s services.

Mr Owen said Scotland was in a “very different” situation from Wales, adding that “there is no clear roadmap that they’d be able to prepare for us”.

He said: “What I would say is, Scottish independence would be a huge gamechanger in Wales.

“If they did get independence, obviously it would change the United Kingdom because Scotland wouldn’t be part of it.”

In May Ms Sturgeon led the SNP to victory at the Scottish Parliament election, although the party fell one seat short of a majority.

The nationalists secured a fourth consecutive term in Government, which the First Minister said gave the SNP the mandate to pursue independence.

The party has said it will hold a new referendum on independence – Indyref2 – by the end of 2023, as long as the pandemic permits.

Mr Owen claimed Scottish independence would “change the views” of “many people” in Wales.

He said: “For example I think it would change the view of many in elected positions within the Labour Party in Wales.

“You know, how they managed to get rid of the Labour Party, for example how the SNP has dominated politics there since 2007.

“Of course, as I’ve stressed before, Wales is very different from Scotland.”
Source: Read Full Article