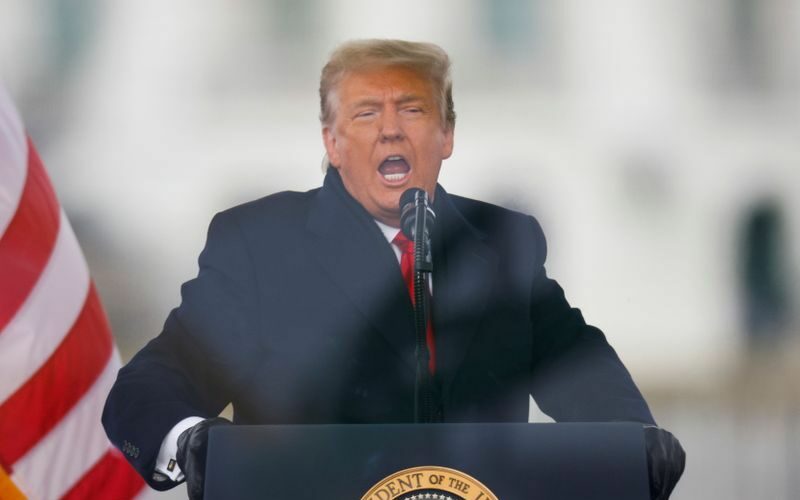 The Republican Trump, who has spent much of his time since then in a failed effort to reverse his defeat, falsely said he won the election as he spoke on an outdoor stage framing the White House, which Biden is due to take over in two weeks.

Crowds gathered at the “Save America March” wore Trump-approved red baseball caps and cheered as Trump repeated the groundless conspiracy theories that have consumed his final days in office.

“You don’t concede when there’s theft involved,” Trump said after taking the stage following a playlist blasted over loudspeakers of power ballads by Elton John and Phil Collins. “Our country has had enough and we will not take it any more.”

He aired his familiar grievances with the news media and Hillary Clinton, his former Democratic rival from the 2016 election, and delighted the crowd by calling Democratic victories the product of what he called “explosions of bullshit.”

Weeks have passed since the states completed certifying that Biden, a Democrat, won the election by 306 Electoral College votes to Trump’s 232, and Trump’s extraordinary challenges to Biden’s victory have floundered in courts across the country.

Congress was due to confirm Biden’s victory on Wednesday. Many of Trump’s fellow Republicans have promised a stonewalling effort that could stretch proceedings past midnight but was almost certain to fail.

Members of militia groups and far-right groups, some in body armor, mingled with the crowds.

Washington police earlier banned from the city Enrique Tarrio, the leader of the Trump-supporting far-right group the Proud Boys, after he was arrested on Monday for destruction of property and possession of a firearm magazine.

Other members of the men’s group, which espouses white nationalism, gathered at the U.S. Capitol. Tarrio could not immediately be reached for comment.

Crowd control largely fell to the Metropolitan Police Department, which mobilized all 3,750 officers, the Capitol Police, the Park Police, the U.S. Secret Service, and more than 300 members of the cityâ€™s National Guard, according to Washington police chief Robert Contee and other officials.

Police have told protesters not to bring their guns to Washington, which has some of the country’s strictest gun laws and bans the open carrying of firearms.

On Tuesday evening, Trump supporters trying to reach Black Lives Matter Plaza near the White House were stopped by police in riot gear who used pepper spray and batons to drive them back. Police said a handful of their officers were injured in scuffles and 10 people were arrested from Tuesday into Wednesday morning, a police spokeswoman said.

06/01/2021 Politics Comments Off on 'We will not take it any more,' Trump tells supporters as Congress meets to certify Biden win
World News