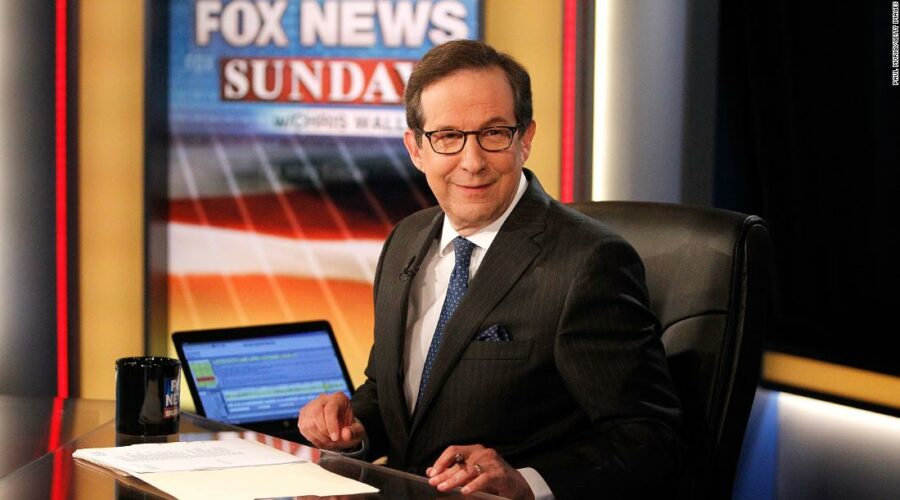 New York (CNN)A version of this article first appeared in the “Reliable Sources” newsletter. You can sign up for free right here.

Sunday morning’s big surprise in the TV news world, Chris Wallace signing off from Fox News, was followed by a second surprise a few minutes later: Wallace is joining CNN as an anchor on the CNN+ streaming service.
Both parts of the story speak volumes about the respective networks. First, let’s tackle the CNN part. Mediaite called Wallace’s move to CNN, and to streaming, an “industry shocker.”

A big statement by CNN+

The Wall Street Journal’s Ben Mullin is right about this: “Wallace’s move to CNN+ is one of the biggest signs yet that CNN is investing heavily in its pivot to direct-to-consumer streaming.”

CNN chief Jeff Zucker said as much in his statement welcoming Wallace to the company. “We are thrilled to have Chris on the ground floor of helping us build the next generation of CNN and news,” Zucker said. Other hires specifically pegged to CNN+ have included Kasie Hunt and Scott Galloway, and they are just the beginning.
The subscription streaming service is launching in early 2022. As I mentioned on the air on Sunday, it will feature new programming, on top of what currently appears on cable. Sunday’s press release said that “more information about Wallace’s show, additional hires and CNN+’s full lineup will be available in the weeks and months to come.”

A big loss for Fox’s newsroom

I suspect Tucker Carlson was gleeful when he heard the news, but Fox’s thinly staffed Washington bureau was gutted on Sunday. Wallace is part of the network’s backbone. Or rather, he was. A Fox source said to me his departure felt “like a death in the family” at the bureau. Numerous Fox stars praised him on Twitter and said they were disappointed by the news. “Sad to see Chris go — he’s had an amazing run at ‘Fox News Sunday,'” Bret Baier wrote.
Rank and file staffers were totally in the dark about his decision until he announced it on the air and sent out a farewell email. “This was a very well-kept secret,” Guy Benson, one of Wallace’s final guests, tweeted. Minutes after the show, Wallace entered the newsroom and received an ovation from staffers as he walked toward his office, according to bureau sources. He spent some time talking with his surprised producers. Whether Wallace counts himself in this crew or not, he is the latest example of a journalist exodus from Fox.
Wallace is taking with him five decades of journalism experience and bringing it to CNN. Before taking over as host of Fox News Sunday in 2003, Wallace was the chief correspondent for Primetime Thursday and a substitute host for Nightline at ABC News for 14 years. Before that, Wallace moderated Meet the Press on NBC News and served as the network’s chief White House Correspondent. Wallace, who is the son of “60 Minutes” reporter Mike Wallace, got his start in print journalism at the Boston Globe, where he was already displaying clues for ambitions in broadcast news.
“Former Globe editor Matthew V. Storin remembers him as an ‘excellent reporter’ and an ‘aggressive, ambitious’ journalist,” the Globe said in a 2016 profile about Wallace. “Storin recalled one time when Wallace returned a voice recorder to the Globe newsroom, apparently forgetting about what he recorded on the tape. When Storin played the tape, he heard Wallace, in his best newscaster’s voice, pretending to be a broadcast journalist reporting on the Vietnam War.”

Wallace, 74, had multiple options when his four-year Fox contract was approaching its end point earlier this year. Wallace ultimately decided he didn’t want to renew with Fox, according to a person with knowledge of the matter. CNN may have looked even more appealing after “Patriot Purge,” Carlson’s January 6 denialism, made headlines in early November.
NPR’s David Folkenflik recently reported that Baier and Wallace were so troubled by Carlson’s conspiracy crusade that they “shared their objections” with management. But those complaints clearly fell on deaf ears, even though Wallace’s contract was coming due and execs must have known that he might leave. As Clive Irving wrote for The Daily Beast on Sunday, “Fox News Is Fully Tucker TV Now.”

“The reality is the Fox that Wallace is leaving is quite different than the network he joined 18 years ago. Back then, the network had a conservative tilt. But in recent years, it has transformed into a hyper-partisan right-wing talk channel that is comfortable pushing dark conspiracy theories to its viewers all day and night.
Puck’s Washington correspondent Julia Ioffe said it well on Sunday’s “Reliable Sources:” Fox is like “a crazy sauce that you keep on the burner,” she said, “and it keeps reducing more and more and gets more and more concentrated, and I think that flavor isn’t for everybody. I can see why Chris Wallace, who is kind of a more down-the-middle, just-the-facts man journalist, I think it’s hard to stay at a place like that.”
Source: Read Full Article