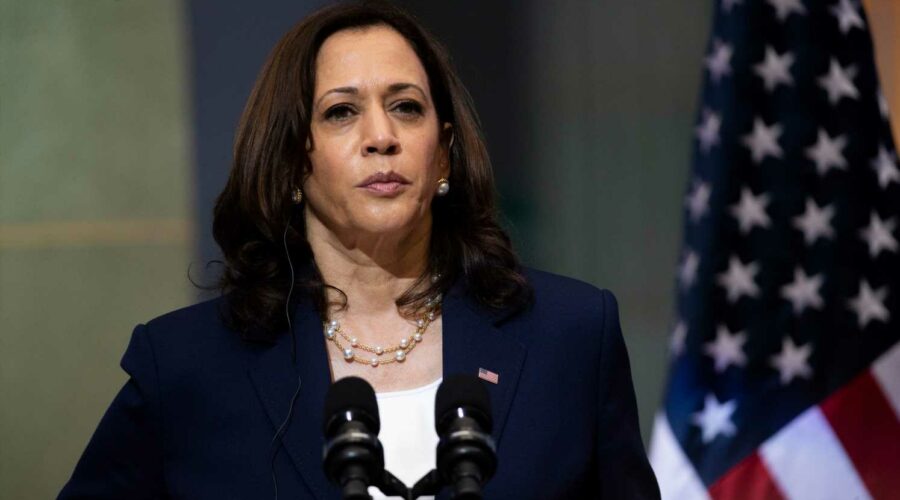 WASHINGTON – Vice President Kamala Harris will host a roundtable Tuesday with a group of female immigrants who have temporary protection from deportation as the administration looks to revive a bipartisan push to grant them legal status through a pair of bills that have languished in the Senate.

The meeting marks the nine-year anniversary of the creation of the Deferred Action for Childhood Arrivals program, an Obama-era policy that shielded undocumented immigrants brought to the U.S. as children from deportation. The roundtable will come hours after the Senate Judiciary holds a hearing on a bill that would provide permanent legal status for an estimated 11 million undocumented immigrants.

The roundtable comes as DACA’s future remains in peril as a federal judge in Texas is weighing a court challenge to strike down the program entirely, sealing the fate of hundreds of thousands of young immigrants who have spent the majority of their lives in the U.S. but may be forced to return to countries they haven’t seen in years.

Some advocates are concerned the administration is running out of time to codify protections for undocumented residents given Democrats’ razor thin majorities in Congress, which has not passed comprehensive immigration reform in more than three decades.

Greisa Martinez Rosas, executive director of United We Dream, a Washington, D.C.-based advocacy group, said the measure of success will be whether Biden delivers citizenship for young immigrants, farm workers and TPS recipients at the end of his first year as he promised.

“Or did he yet again continue the legacy of this country of promising something to people, whose labor is essential, and not delivering?” she said. “It can either be one of the biggest failures or one of the biggest victories that Biden would be able to break a 35-year logjam in Congress and right now we can’t wait any longer.”

Homeland Security Secretary Alejandro Mayorkas said earlier this year the administration was drafting a rule to “preserve and fortify” DACA, but the program could still face legal challenges. Experts contend solidifying recipients’ legal status can only be achieved through legislation.

Doris Meissner, former commissioner of the U.S. Immigration and Naturalization Service and a senior fellow at the Migration Policy Institute, said while the administration has proposed sweeping legislation, the Dream and Promise Act is a “primary candidate” for some progress on immigration reform given DACA’s support across the aisle.

Ai-jen Poo, co-founder and executive director of the National Domestic Workers Alliance who will also be in attendance, said the meeting ties the importance of immigration reform to economic recovery following the COVID-19 pandemic by highlighting immigrants who work as care professionals.

“Immigrants are a part of every single industry that we are going to rely on for a strong economic recovery,” Poo said. “In the same way that we’ve also relied on them to get us through the pandemic and the care economy is one sector where that has been happening.”

President Joe Biden has repeatedly called on Congress to enshrine DACA protections as part of a campaign promise but Republicans have instead focused on border security and a rise in unaccompanied minors showing up at the U.S.-Mexico border, overshadowing hopes of bipartisan compromise on immigration reform. DACA status has to be renewed every two years and does not offer a path to citizenship.

The vice president will use the meeting to call on the Senate to pass two bills that cleared the House with bipartisan support earlier this year: the American Dream and Promise Act, which would give “Dreamers” the ability to live and work in the U.S, as well as Farm Workforce Modernization Act, which would enable more than 1 million undocumented farm workers to apply for legal status.

Will DACA recipients or farm workers get a fast track option in the Joe Biden's White House immigration bill? You asked, we answered.

An estimated 1 million DACA recipients and 131,000 TPS holders from El Salvador, Honduras and Haiti are essential workers who have been working on the front lines of the COVID-19 pandemic, according to FWD.us, an advocacy group co-founded by Mark Zuckerberg, Bill Gates and other tech leaders. About 29,000 DACA recipients and 11,600 TPS recipients are health care workers, the group found.

Biden took office vowing to unwind four years of former President Donald Trump’s hardline immigration policies including the end of the DACA program, which the Supreme Court upheld in a ruling last year.

But the administration has been slow to fulfill the president’s campaign promises to overhaul the U.S. immigration system as other legislative priorities like COVID-19 relief and infrastructure have taken center stage.

Harris traveled to Guatemala and Mexico last week to lead diplomatic talks on border security and addressing the underlying causes of migration from Central America, a strategy the administration argues is key to resolving irregular migration.

The U.S. Citizenship and Immigration Services announced Monday it would create a system that would expand access to applicants for U visas, which are issued to immigrants who are victims of certain crimes like domestic violence or trafficking and cooperate with law enforcement investigations.

Meissner said while the administration continues to use the bully pulpit to pressure lawmakers to act, “the really big thing that has to happen is out of its hands, in that Congress has been missing in action for years.”

“Immigration is clearly looming as a major wedge issue coming into the 2022 midterm elections, and the question of bipartisanship is the overarching question,” she said. “They need to do everything they can to keep the spotlight on Congress, which is where it belongs.”

14/06/2021 Politics Comments Off on VP Harris to meet ‘Dreamers’ on 9th anniversary of DACA amid uncertainty over immigration bills, Texas case
Markets