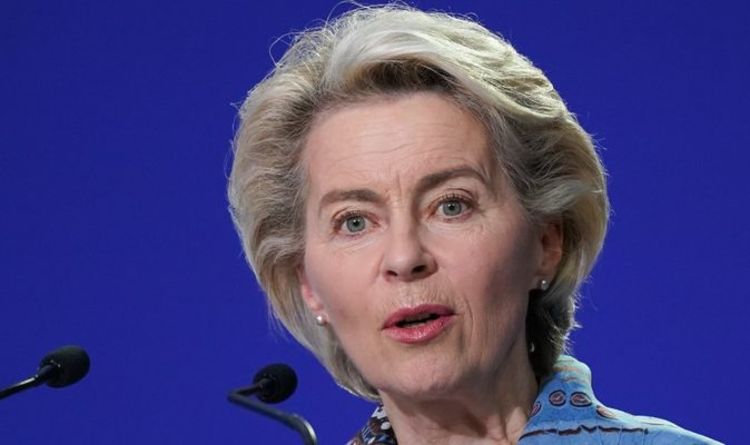 Belarusian leader Alexander Lukashenko has been accused of sending thousands of refugees towards Poland, in what the EU has dubbed a “hybrid attack”. Speaking about the situation to the European Parliament, Ms von der Leyen said: “It is the EU as a whole that is being challenged.

“The strategy employed by Belarus is based very clearly on the complicity of tour operators and their intermediaries.

“This was not a migration crisis.

“This was an attempt by an authoritarian regime to destabilise their democratic neighbours.”

In response, the EU is coordinating with the UK, US and Canada to prepare a package of sanctions for Belarus, including a blacklist for travel companies that help refugees move towards the EU.

Such companies, which provide a range of services including visas, accommodation, flights or other transportation could lose their authorisation to offer their services, refuel or maintain their means of transport in the EU.

Ms Von der Leyen said: “We agreed that to counter this behaviour, it is important to coordinate our sanctions and to work with countries of origin and the airlines that are transporting migrants to Minsk.

“And this is what we have done, and what we are doing.

“We are in the process of coordinating our sanctions with the United States, Canada and the UK.”

Ms Von der Leyen has also offered to triple aid packages for affected EU countries, including Poland, Lithuania and Latvia, to secure their borders, with each country getting an extra 200 million euros.

Mr Lukashenko has been accused of using the refugees as pawns in his battle with the nations.

Calling the wave of refugees “an invasion”, the Polish government has said it is “determined” to “defend” Europe.

The Polish Prime Minister Mateusz Morawiecki said: “The Polish government is determined and we will defend the security of our country and the entire EU, respecting our international obligations and bearing in mind, above all, the interests of the state and the safety of Polish soldiers, Border Guard officers and citizens.”

The Polish government sent 12,000 troops to reinforce the 10,000 already stationed at the border.

However, in what may be seen as a retreat, Belarus is said to have flown hundreds of refugees from the border back to the Middle East, according to Polish government sources.

A spokesperson for the Polish secret services, Stanislaw Zaryn, said that one plane with 118 migrants on board took off from Minsk on Monday.

But speaking on the Polish television channel TVP Info, he added: “That is no evidence that the Lukashenko regime is moving away from its strategic plan.

“It would be premature to see this as a step towards de-escalation.

“There are also signs that further migrants were being brought to the border.”

Amnesty International has described the conditions the refugees are living in as “horrendous”, saying that Poland’s removal of refugees has so far been illegal.

Eve Geddie, Director of Amnesty International’s European Institutions Office, said: “Poland has been cruelly holding this group of people on their border in horrendous conditions for weeks.

“Our analysis shows irrefutably on August 18, their position shifted from Poland to Belarus overnight, which strongly suggests that they were victims of an unlawful pushback.”