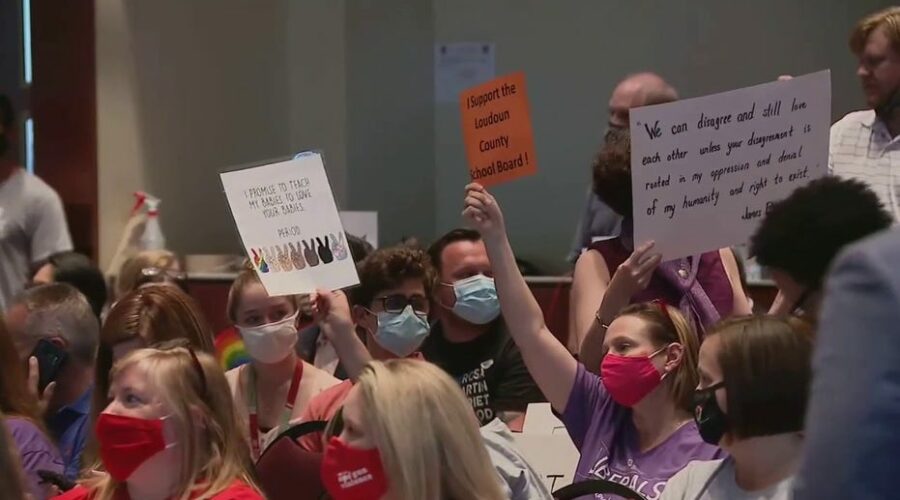 Loudoun school board meeting on June 8, 2021

Virginia teacher Byron “Tanner” Cross saw an outpouring of support Tuesday as public commenters blasted a school system’s decision to suspend him after his now-viral comments about gender.

The dramatic meeting of the Loudon County Public Schools’ board was full of mic- drop moments and testy confrontations over issues plaguing the school district. Many public commenters either backed Cross or criticized the school board over critical race theory (CRT).

“Where is your regard for our freedom of speech?” asked parent Rachel Pisani, who said she was a mother of three in Loudoun County. “When I saw a teacher express an opinion and suspended for expressing his religious beliefs, I could no longer stay silent. When did it become acceptable to be tolerant only when someone expresses a view that we agree with? When did it become appropriate to silence those that hold Christian, biblical views just because you don’t? When did it become appropriate to allow the school board – I don’t know who you think you are – but it is not appropriate, it is not allowable to silence, bully, or dismiss our views.”

Due to a time constraint, her mic was cut off but she kept speaking and received raucus applause – flouting Chairwoman Brenda Sheridan’s request to use jazz hands. After that speech, Sheridan called for a recess and told the audience to find its “decorum.” Amplifying the tension, audience members repeatedly flouting her request, prompting multiple reminders from the chair.

Another female told the board: “Even being threatened with termination for simply speaking one’s opinion creates a culture of fear and silence – and this does not help anyone on either side of the aisle.”

Some educators also expressed concern as they held conservative views on gender and religion.

Teacher Monica Gill told the board its suspension of Cross and other actions “resemble totalitarianism, not the Constitution.”

She added that “first and foremost, I am a Christian. What is most important? We live in truth, not lies. We look at character, not skin color. We love our lord and we love others. Know this – We will not yield. We will not let you have our souls or the souls of our children.”

Cross sparked an uproar last month when he told the school board he wouldn’t “affirm that a biological boy can be a girl and vice versa because it’s against my religion. It’s lying to a child, it’s abuse to a child, and it’s sinning against our God.”

Just days after that speech, Cross was told in a letter not to come on the school’s premises. The letter vaguely stated the school district was investigating “allegations that you engaged in conduct that has had a disruptive impact on the operations” of his school.

At one point Tuesday, teacher Jeremy Wright, who previously called the school board fascists, left what he said was a copy of the First Amendment on the podium. “For the members of Chardonnay Antifa, here is your assignment with a copy of the First Amendment attached,” said Wright before holding up a packet of paper. “I’m going to leave this here and I hope you learn something.”

After Wright received applause, Sheridan said: “I’ll remind you that I will entertain a motion to move public comment to the end of our agenda. Jazz hands only.”

A judge ordered LCPS on Tuesday to reinstate Cross, arguing it violated his right to free speech.

Cross had referred to draft policy 8040, which required Loudoun staff to use preferred pronouns.

“LCPS staff shall allow gender-expansive or transgender students to use their chosen name and gender pronouns that reflect their gender identity without any substantiating evidence, regardless of the name and gender recorded in the student’s permanent educational record,” it read.

“School staff shall, at the request of a student or parent/legal guardian, when using a name or pronoun to address the student, use the name and pronoun that correspond to their gender identity. The use of gender-neutral pronouns are appropriate. Inadvertent slips in the use of names or pronouns may occur; however, staff or students who intentionally and persistently refuse to respect a student’s gender identity by using the wrong name and gender pronoun are in violation of this policy.”

Another proposed policy, 8350, stated LCPS staff “shall allow gender-expansive and transgender students to participate in such activities in a manner consistent with the student’s gender identity.”

Many speakers seemed to support the school’s approach to gender.

State delegate Jennifer Boyko defended the policies. Wearing a rainbow pin and mask, she told the board: “I want to thank you for your commitment to equality and making sure every child feels loved and valued.”

A remote speaker, who identified as a mother of Cross’ students, suggested Cross was shirking his responsibilities as a teacher. She argued Cross used a “literalist interpretation of the Bible to argue why he refuses to fulfill his responsibility as a public school teacher.”

Another remote speaker argued policies like 8040 weren’t new and would make “trans and gender-expansive kids feel a little more welcome.”

Other audience members held up signs that declared their support for the school board.

One parent, Elizabeth Perrin, said the issue was more about the First Amendment than inclusion.

“I have many LGBTQ friends and business mentors, and could not be happier that their rights and inclusion have been supported by our society as a whole,” she told Fox News via text on Wednesday.

“That said, this was and will always be a first amendment violation by the school board, and am thrilled that the court held up Tanner Cross’ right to address his government. “

Tuesday’s meeting represented the culmination of frustration that has long been building in the county.

As multiple attendees noted, parents are campaigning to recall members in reaction to their conduct over the past year.

Cross’ suspension was just the latest incident to raise questions about how LCPS treats dissenting viewpoints. A lawsuit filed last week featured parent allegations that the district engaged in racial and viewpoint discrimination with its “equity student ambassador” program. 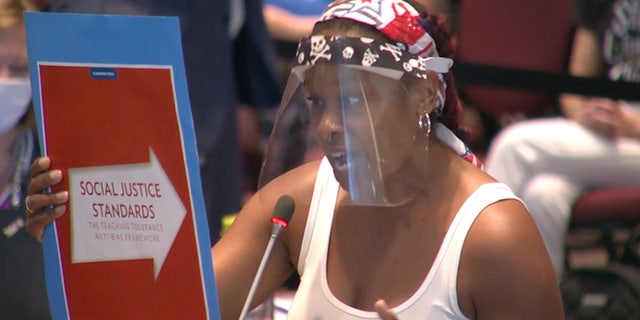 Other concerns have been raised at the faculty level. The Daily Wire previously reported on how the leader of the district’s Minority Student Achievement Advisory Committee (MSAAC) proposed punishing teachers if they criticize equity trainings.

“That simply cannot and should not be tolerated by anyone employed by LCPS!” MSAAC Chair Keira Jennings reportedly wrote. She then appeared to call for teachers to be dismissed if they did not fully embrace diversity training. “If our teachers and staff cannot be open and willing to learn how to be culturally competent then they do not need to be in the classrooms any longer as they will only hinder the process and most importantly cause irreparable harm to the vulnerable hearts and minds of our students,” Jennings said.

Public Information Officer Wayde Byard previously told Fox News that LCPS “has stated, consistently, that it does not condone the actions of employees – or anyone – who would target fellow members of the community for expressing their viewpoint.” In addressing another teacher’s criticism of CRT opponents, Byard emphasized that the teacher was exercising her First Amendment rights.

But Loudoun parents are skeptical. In response to the Cross suspension, Perrin previously told Fox News, “It is truly sad that once again, our school board listens only to those in agreement with their point of view, and punishes any dissenting opinions via social media.”

She was referring to the secret Facebook group, Anti-Racist Parents of Loudoun County, which has members who allegedly tried to doxx and blacklist CRT opponents.

Some board members belong to the group, although the extent of their involvement with various activities remains unclear. They’ve been accused of tacitly allowing efforts to intimidate CRT opponents. At least one member – Beth Barts – has been censured in relation to her social media activity and was stripped of her committee assignments. Barts and others in the Facebook group are collectively known by critics as the “Chardonnay Antifa.”

The district has denied teaching CRT, but recent information has raised questions about the role it plays in the district’s decision-making.

LCPS held an equity workshop last week as part of its response to the ongoing controversy engulfing the county. During that talk, Barts seemed to acknowledge that CRT influenced LCPS policy.

When contacted about Bart’s comments, LCPS spokesman Byard reiterated that the county has no curriculum teaching CRT.

Then-Acting Superintendent Scott Ziegler, whose position was made permanent Tuesday, said in March that “LCPS has not adopted Critical Race Theory as a framework for staff to adhere to.”

Ziegler has also defended the trainings, saying: “In explaining LCPS’ equity priorities, it might be helpful to state what they are not. They are not an effort to indoctrinate students and staff into a particular philosophy or theory. What they are is an effort to provide a welcoming, inclusive, affirming environment for all students.”

However, documents obtained by Fight for Schools PAC indicated staff were at least coached on the ideology.

An invoice from The Equity Collaborative, which received nearly $500,000 from the county, contained a line item for “Coaching support for LCPS leaders – follow up meetings focused on Critical Race Theory Development May 2020.” That was billed at $625 per hour for five hours, or $3,750. LCPS did not respond to a request for comment on this.