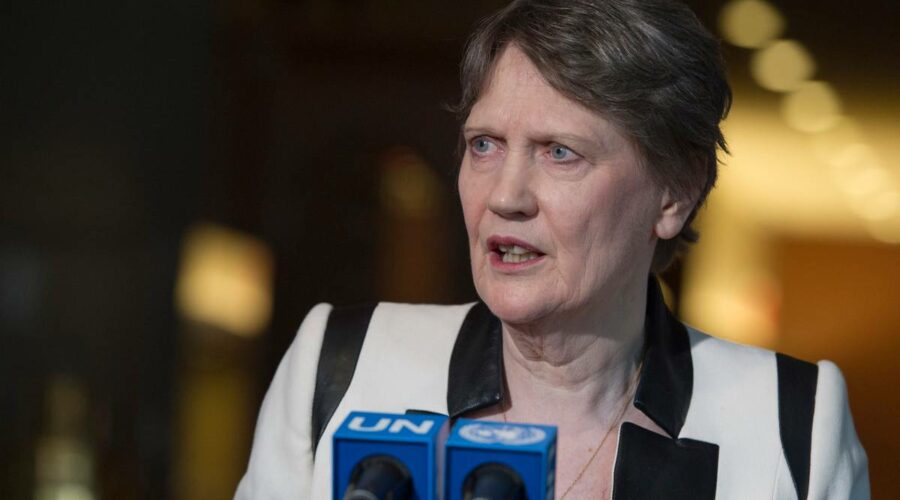 Former leaders and diplomats reflect on how Russia came to invade Ukraine, and what its President, Vladimir Putin, is really like.

Clark saw Putin regularly at “probably every Apec summit [she] went to”.

“He practised English throughout the years, he was capable of holding an informal conversation,” she said.

Clark said the man who invaded Ukraine this week was “not the man we were interacting with in those Apec years”.

“Time has taken its toll,” she said.

“He interacted in a very collegial way at Apec. We had our tense times, particularly over the US invasion of Iraq,” she said, but added that Putin was capable of sharing a joke – even a joke about himself.

“I remember now at the last Apec meeting I saw him at, which was in Sydney in 2007, and I remember he’d announced he was standing down as president and we all sort of joked he didn’t look like a man who was about to leave politics,” she said.

Putin did not leave politics. Barred from serving a third consecutive term as president, Putin switched jobs and became Russia’s prime minister, during which it was widely suspected he was still effectively running the country through then President Dmitry Medvedev. In 2012, Putin became president again.

“He could take a bit of a joke. I seem to remember a bit of banter at the lunch table. ‘You look very relaxed Mr President’, and [he] just laughed,” Clark said.

“You could sort of joke about that, but you can’t joke now. This is literally deadly serious,” she said.

Clark said the warning signs of the current invasion were obvious during the 2014 annexation of the Crimean peninsula.

“That was a sign of what he was capable of,” Clark said.

“When he annexed Crimea, which was very popular in Russia at the time, even [Mikhail] Gorbachev was in favour of it. There was a feeling [Nikita] Khrushchev never should have gifted Crimea to Ukraine,” she said.

She said Putin’s view of the collapse of the Soviet Union and what this meant for Russia’s security was key to understanding the present crisis.

“He’s been quite explicit in recent years that he thinks the greatest tragedy of the 20th century was the fall of the Soviet Union,” Clark said.

She said former United States Secretary of State Henry Kissinger – the man responsible for luring China into the ambit of the United States and away from the Soviet Union – described Ukraine as a “classic buffer state”.

Putin has repeatedly expressed Russia’s displeasure with the idea of Ukraine entering the Nato alliance, effectively pushing what constitutes the Western military right up to Russia’s border.

“It shouldn’t go into Nato,” Clark said, bringing up the example of Finland, another country on the border of Russia.

“Finland is on the border of Russia. A defeated state in 1945, [it] was able to keep its independence, eventually enter the European Union, but never Nato. If history rewrites the record, it will probably say that should have been a conscious strategy for Ukraine,” she said.

However, she believed Nato’s tortured domestic politics, which often featured heavy lashings of Russian involvement, made this path impossible.

“The more Ukraine talked about Nato and wanted to enter it, the more the paranoia grew in Moscow,” she said.

Clark believed Putin has invaded now because “he saw the West distracted”.

“We’re all distracted by Covid; Afghanistan was a debacle. He knew the US and Nato wouldn’t put troops on the ground,” Clark said.

“It all depends now on how hard Ukrainians fight. They’ve got most of their army trapped on the ground in the separatist regions,” she said.

Another source spoken to for this story took a similar view, believing that the United States’ early decision to rule out any military action against Russia gave Putin the confidence he needed to invade.

They believed military action against Russia for invading Ukraine would have been a price too high for Putin to pay, which is a contrast to the current sanctions regime, which Putin appears quite happy to wear.

The National Party is currently trying to have the Government adopt an autonomous sanctions regime, which would allow New Zealand to sanction countries without going through the United Nations.

The Government had been cold on autonomous sanctions, preferring the United Nations route, however on Friday Prime Minister Jacinda Ardern said the Government had not “reached a final conclusion” on the matter.

“I would make no assumption about the position,” she said.

“I haven’t really followed it too much,” she said, “the law as it is what it was when I was around”.

“New Zealand usually takes its lead from the UN. It puts a lot of weight on that, but people should debate it – I don’t know which way it will go, but it should be debated,” Clark said.

Former deputy prime minister and National party leader Jim McLay, who represented New Zealand at the United Nations from 2009 to 2015 described the invasion as ” one of the most blatant breaches of international law and state sovereignty in recent times”

“Unquestionably this is in breach of international law. You do not create new states by invading sovereign territory,” he said.

“I have good friends who were ambassadors from the former Warsaw Pact [countries] behind the iron curtain,” McLay said.

“These were people who had family in their countries, they remembered the Soviet period, they equated it with Russia,” he said.

“They were genuinely scared and fearing what happened to their country. I got a sense of what it must have been like in the last days of the League of Nations in Geneva in 1939,” he said.

McLay said diplomacy with Russia was complicated by the fact the Kremlin set the bottom line for diplomats.

“Most of their diplomats were pleasant to deal with. They did a very good job of representing their country.

“But you knew there was a bottom line, and that was coming out of the Kremlin If you were a diplomat you recited the official Kremlin position or you went home,” he said.

“He is determined to protect what he regards as a vulnerable north European plain. He absolutely regards Ukraine as an integral part of greater Russia,” he said.

McLay would not comment on whether autonomous sanctions legislation would be worthwhile in New Zealand.

Winston Peters – "This is realpolitik at its most abrasive"

Peters met Putin while foreign minister, but said he could not form an opinion of him as the meeting was only brief.

He found diplomacy with Russia “not that difficult at all”.

“You’ve got your facts right and you’ve got an understanding of who you’re dealing with.

“You’ve got to establish a rapport where bulldust is not going to work. I think I had that sort of relationship with Sergei [Lavrov, Russia’s foreign minister], so I could talk to him frankly.

“The facts are this is Putin’s war, and it was signalled behind months of veiled peaceful military exercises. It was always going to come to this,” he said.

Peters said Putin’s position echoed the Monroe doctrine, a feature of American foreign policy in the 19th and 20th centuries, which opposed European colonialism in the Western hemisphere. This meant America viewed any interference by European powers in the Americas, as a potential threat against itself.

“The Monroe doctrine echo, where Russia is concerned, is a very compelling one,” Peters said.

Putin’s language concerning Ukraine has echoed the tenets of the Monroe doctrine, by calling on other countries to cease interfering in Russia’s backyard. The problem for Putin is Ukraine itself appears to want to attach itself to the West.

“I don’t have sympathy – but it is understandable,” Peters said.

“It is an illegal war – yes. I do not think that the ends of diplomacy towards this event were exhausted,” he said.

He said there was a “middle option” that would see Ukraine sit independently between West and East, with both sides respecting that the country fell within neither’s sphere of influence.

“This is realpolitik at its most abrasive,” Peters said.

Peters said sanctions would make little difference to Russia, as it had taken action since the 2014 annexation of the Crimea to “sanction-proof” the economy.

“The reality is the sanctions won’t work in the short term, Putin has been preparing to ‘sanction-proof’ his economy for the last eight years,” Putin said.

“There were signals there that the leadership in the West has not responded to with a degree of urgency and seriousness,” he said.

He noted that it was in fact the West which was vulnerable to disruption from Russian war. Germany is highly dependent on Russian gas, although it said this week it was halting certification of Nord Stream 2, a new gas pipeline from Russia to Germany.

Energy and Resources Minister Dr Megan Woods said on Friday that New Zealand does not “purchase any oil or oil products from Russia so would not be directly affected if Russian oil supply is curtailed”.

However, New Zealanders will be impacted by global price fluctuations in commodities which are inevitable, as well as sharemarket volatility, which began as soon as Putin announced his intention to invade.

Peters said this was a lesson to New Zealand, which should itself think about securing its energy supply and critical resources.

He disagreed with an autonomous sanctions regime because sanctions imposed by a small country like New Zealand could never hope to make much difference.

“The flaw in autonomous sanctions is that – there is no power or might in them if it is not collective. I cannot think of the few hundred million we do with Russia in terms of trade is going to affect the outcome.

“Acting like you are responsible when you are in fact irresponsible is not sound policy,” he said.

25/02/2022 Politics Comments Off on Ukraine Crisis: Helen Clark, Jim McLay, Winston Peters on Vladimir Putin, the man who could once take a joke, but is now invading Ukraine
Markets