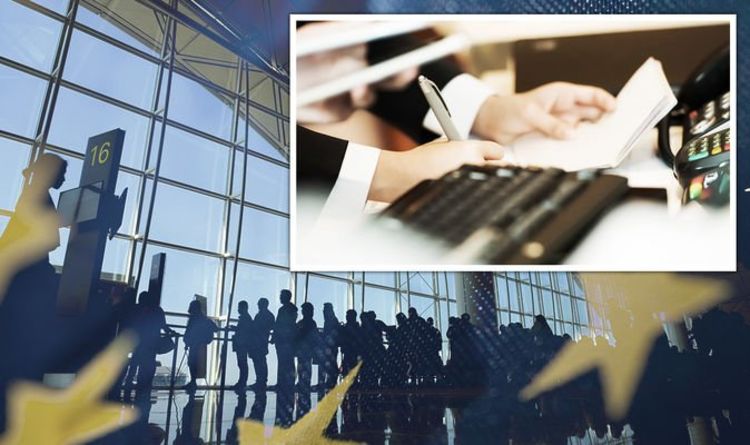 Immigration minister Kevin Foster insisted the Government would take a hardline stance on any Europeans flouting the rules by remaining in the country because the British public expects them to be enforced. But despite this, he revealed that almost six million EU citizens had been accepted and would be allowed to stay as a result of the “success of the EU Settlement Scheme”. In an interview with an Italian newspaper, Mr Foster said 5.4 million people had been accepted onto the scheme, with the government’s 1,500 working through another 400,000 applications.

Some 145,200 applications to remain in the UK, under the terms of the EU Withdrawal Agreement, have been rejected, according to Government figures.

Mr Foster told La Repubblica: “EU nationals who have been refused status, and who remain in the country, will be in the UK illegally. At that point those people should take steps to leave. We expect people to leave the country voluntarily but, where they do not, Immigration Enforcement will seek to enforce their departure.

But he was insisted that the Government was only refusing applications as a “last resort”.

The immigration minister added: “Our caseworkers are trained to look for reasons to grant status rather than refuse.

“We will continue to take a proportionate, pragmatic approach to the operation of compliant environment and enforcement measures.”

The EU Settlement Scheme was launched in March 2019 to regulate immigration status of Europeans citizens who live in the UK.

Settled status is given to people who can prove they have been in the UK continuously for five years or more.

Those living in the UK for shorter periods of time can qualify for pre-settled status, which can be upgraded once the applicant has reached the five-year milestone.

It was expected around three million Europeans would apply for the scheme when it was negotiated as part of the divorce deal.

But numbers skyrocketed because of previously unregistered Europeans coming forward to confirm they had been residing in the UK.

And applications are still pouring in after the June 30 deadline for them to be completed, Mr Foster confirmed.

MUST READ: PM’s plan to save Christmas: letters sent to million lorry drivers

He said: “Over 108,000 applications have been received since 30 June 2021. But it’s worth noting not all of these will be late applications.

“This number will include a mix of late applicants, joining family members of people who have already been granted status, and those moving from pre-settled to settled status.”

He added: “The success of the EU Settlement Scheme means there has been a higher volume of applications than any estimate.

“We also saw significant increases in the number of people applying ahead of the deadline, with more than 400,000 applying in June 2021 alone.”

But the rules will not be relaxed to help fill a growing number of job vacancies across the UK.

Mr Foster said: “I have seen the discussions around the link between job vacancies and labour shortages in the UK and the role of the points-based immigration system, but there are no plans to relax the Immigration Rules.

“We do not accept the points-based system is the key cause of labour shortages in the UK, not least because we can see similar scarcities across the EU, specifically in areas like hospitality and truck driving.

“In any case, uncontrolled immigration from the EU is simply not a long-term solution whilst many UK citizens remain out of work or face the need to find new employment as furlough comes to an end.”