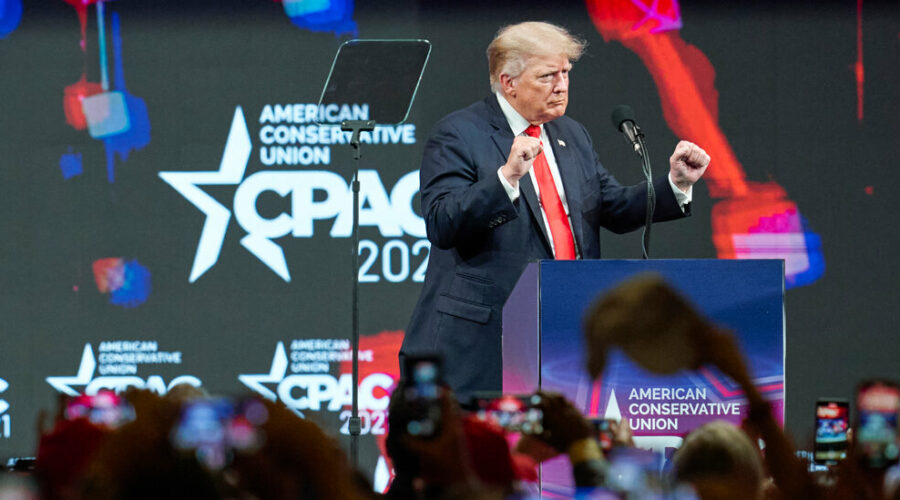 The aggressive fund-raising tactics that former President Donald J. Trump deployed late in last year’s presidential campaign have continued to spur an avalanche of refunds into 2021, with Mr. Trump, the Republican Party and their shared accounts returning $12.8 million to donors in the first six months of the year, newly released federal records show.

The refunds were some of the biggest outlays that Mr. Trump made in 2021 as he has built up his $102 million political war chest — and amounted to roughly 20 percent of the $56 million he and his committees raised online so far this year.

Trailing in the polls and facing a cash crunch last September, Mr. Trump’s political operation began opting online donors into automatic recurring contributions by prechecking a box on its digital donation forms to take a withdrawal every week. Donors would have to notice the box and uncheck it to opt out of the donation. A second prechecked box took out another donation, known as a “money bomb.”

The Trump team then obscured that fact by burying the fine print beneath multiple lines of bold and capitalized text, a New York Times investigation earlier this year found.

The maneuver spiked revenues in the short term — allowing Mr. Trump to spend money before the election — and then caused a cascade of fraud complaints to credit cards and demands for refunds from supporters. The refunded donations amounted to an unwitting interest-free loan from Mr. Trump’s supporters in the weeks when he most needed it.

New Federal Election Commission records from WinRed, the Republican donation-processing site, show the full scale of the financial impact. All told, more than $135 million was refunded to donors by Mr. Trump, the Republican National Committee and their shared accounts in the 2020 cycle through June 2021 — including roughly $60 million after Election Day.

“It’s pretty clear that the Trump campaign was engaging in deceptive tactics,” said Peter Loge, the director of the Project on Ethics in Political Communication at George Washington University. “If you have to return that much money you are doing something either very wrong or very unethical.”

The Trump campaign has previously defended its online practices, with Jason Miller, a spokesman, saying that only 0.87 percent of transactions were subjected to formal credit card disputes last year, which would be about 200,000 transactions. Mr. Miller did not respond to questions this week about the Trump refunds.

Of the refunds issued this year, $8.1 million came from Mr. Trump’s shared account with the R.N.C., the records show. An additional $2.2 million came from his re-election committee and $2.5 million was issued by the party itself. The party stopped operating in tandem with Mr. Trump earlier this year but still owed refunds from 2020; most of its returned donations came in January and February.

The Times investigation had previously found that the Trump operation along with the party had refunded more than 10 percent of the $1.2 billion it had raised online through the end of 2020. President Biden’s equivalent committees refunded 2.2 percent of what had been raised online last year on ActBlue, the Democratic donation-processing site, records show.

The Federal Election Commission has since unanimously recommended that Congress prohibit campaigns from prechecking boxes for recurring donations, and legislation to do so has been introduced in both the House and Senate. The state attorneys general in New York, Connecticut, Minnesota and Maryland have also opened investigations into WinRed and ActBlue’s practices.

WinRed has sued in federal court to stop the investigation by saying that federal law pre-empts any state investigation. Last week, the attorneys general sought to dismiss the WinRed suit, arguing in a court filing that consumer-protection laws gave them jurisdiction.

The prechecked recurring box has become increasingly widespread among Republicans using WinRed, including burying the disclosure under extraneous text; Democrats have moved to stop using such boxes entirely.

The two Republican senators who lost the January runoffs in Georgia, Kelly Loeffler and David Perdue, used prechecked boxes to lead donors into weekly withdrawals, resulting in a rash of refunds. Ms. Loeffler and Mr. Perdue combined to refund $10.4 million from Nov. 24 through the end of June 2021 — out of a total of $68.5 million raised online during that time.

The Democrats who defeated them, Senators Jon Ossoff and Raphael Warnock, raised tens of millions of dollars more online — and refunded less than one-fifth as much, around $2 million, during the same period.

The disparity was even more stark in January of this year, when refunds were surging for Mr. Trump and Georgia Senate Republicans. That month, refunds issued by WinRed equaled nearly 28 percent of what the platform collected in contributions, records show. There was even one day when WinRed issued more in refunds than it reported receiving in contributions.

WinRed said there was simply a greater volume of refunds immediately after elections, and noted that refunds had slowed in recent months. In the first quarter of 2021, records show that refunds issued on WinRed equaled nearly 20 percent of what was raised; that figured dipped to 5.7 percent in the second quarter.

Mr. Trump’s new political action committee, Save America, continues to precheck its “money bomb” and recurring donation box, taking out fresh donations monthly. In addition to the $12.8 million refunded by Mr. Trump’s 2020 re-election campaign and party committees tied to it, his new PAC issued nearly $800,000 in refunds in the first six months of the year, 3.75 percent of what it raised.

ActBlue, which previously allowed campaigns wide latitude to opt donors into repeating contributions, has clamped down on the tactic. In July, the site implemented new rules essentially forbidding political candidates and groups from prechecking a recurring box unless the link to the donation page explicitly says there will be repeating withdrawals.

Digital experts said that many donors do not notice the extra contributions for many months, if at all. Some decide pursuing refunds is too onerous or complex. Older contributors are seen as especially vulnerable to such aggressive digital tactics, campaign strategists say.

For Republicans, prechecking is something some strategists defend as a useful tool to shrink the traditional Democratic advantage of online fund-raising.

The three main Republican Party committees — one devoted to the House, one to the Senate and the R.N.C. — nearly matched the parallel Democratic groups in online fund-raising, collecting $68.8 million compared with $70.8 million for the Democrats in the first six months of 2021.

At the same time, those Republican Party groups issued more than $5 million in additional WinRed refunds compared with the Democratic groups — 11.2 percent of what they raised online compared with 3.7 percent, records show.