WASHINGTON — Voters have decided that President-elect Joseph R. Biden Jr. should guide the country through the next four years. But on issues of war, the environment, criminal justice, trade, the economy and more, President Trump and top administration officials are doing what they can to make changing direction more difficult.

Mr. Trump has spent the last two weeks hunkered down in the White House, raging about a “stolen” election and refusing to accept the reality of his loss. But in other ways he is acting as if he knows he will be departing soon, and showing none of the deference that presidents traditionally give their successors in their final days in office.

During the past four years Mr. Trump has not spent much time thinking about policy, but he has shown a penchant for striking back at his adversaries. And with his encouragement, top officials are racing against the clock to withdraw troops from Afghanistan, secure oil drilling leases in Alaska, punish China, carry out executions and thwart any plans Mr. Biden might have to reestablish the Iran nuclear deal.

In some cases, like the executions and the oil leases, Mr. Trump’s government plans to act just days — or even hours — before Mr. Biden is inaugurated on Jan. 20.

At a wide range of departments and agencies, Mr. Trump’s political appointees are going to extraordinary lengths to try to prevent Mr. Biden from rolling back the president’s legacy. They are filling vacancies on scientific panels, pushing to complete rules that weaken environmental standards, nominating judges and rushing their confirmations through the Senate, and trying to eliminate health care regulations that have been in place for years.

In the latest instance, Treasury Secretary Steven Mnuchin declined to extend key emergency lending programs that the Federal Reserve had been using to help keep credit flowing to businesses, state and local governments and other parts of the financial system. He also moved to claw back much of the money that supports them, hindering Mr. Biden’s ability to use the central bank’s vast powers to cushion the economic fallout from the virus.

Terry Sullivan, a professor of political science and the executive director of the White House Transition Project, a nonpartisan group which has studied presidential transitions for decades, said Mr. Trump was not behaving like past presidents who cared about how their final days in office shaped their legacy.

“They are upping tension in Iran, which could lead to a confrontation. The economy is tanking and they are not doing anything about unemployment benefits,” he said.

It is one final norm shattered by Mr. Trump — and a stark contrast to the last Republican president who handed over power to a Democrat.

Former president George W. Bush consciously left it to his successor, Barack Obama, to decide how to rescue the auto industry and whether to approve Afghan troop increases. And when Congress demanded negotiations over the bank bailouts, Mr. Bush stepped aside and let Mr. Obama cut a deal with lawmakers even before he was inaugurated.

Aides to Mr. Bush said the outgoing president wanted to leave Mr. Obama with a range of policy options as he began his presidency, a mind-set clearly reflected in a 2008 email about negotiations over the status of American forces in Iraq from Joshua Bolten, Mr. Bush’s chief of staff at the time, to John D. Podesta, who ran Mr. Obama’s transition, just a week after the election. 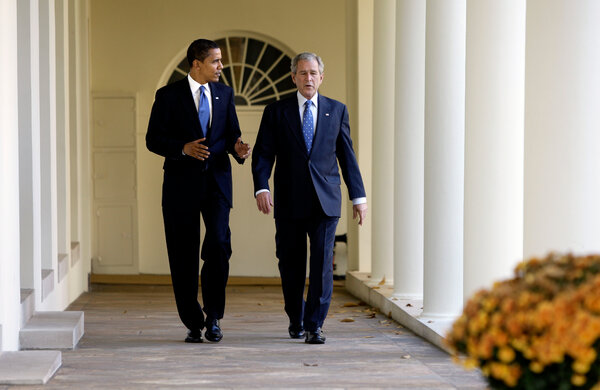 “We believe we have negotiated an agreement that provides President-Elect Obama the authorities and protections he needs to exercise the full prerogatives as commander in chief,” Mr. Bolten wrote to Mr. Podesta on November 11, 2008, in an email later made public by WikiLeaks. “We would like to offer, at your earliest convenience, a full briefing to you and your staff.”

That has not been Mr. Trump’s approach.

The president has continued to deny Mr. Biden briefings and access to agency officials — delays that the president-elect has said threatened to undermine the country’s response to the pandemic. And far from seeking to help Mr. Biden’s team, Mr. Trump has spent more than two weeks actively seeking to undermine the legitimacy of his victory.

Mr. Biden and his top aides have not publicly criticized the president’s policy actions at home or abroad, abiding by the tradition that there is only one president at a time. But the president-elect has vowed to move quickly to undo many of Mr. Trump’s domestic and foreign policies.

That will most likely start with a blitz of executive actions in his first days in office, as well as an aggressive legislative agenda during his first year.

Some of Mr. Trump’s advisers make no attempt to hide the fact that their actions are aimed at deliberately hamstringing Mr. Biden’s policy options even before he begins.

One administration official, speaking on the condition of anonymity because of not being authorized to talk publicly, said that in the coming days there would be more announcements made related in particular to China, with whom Trump advisers believe that Mr. Biden would try to improve relations.

Judd Deere, a White House spokesman, defended the administration’s actions, saying the president was elected because voters were “tired of the same old, business-as-usual politicians who always pledged to change Washington but never did.” Mr. Trump, he said, had rolled back regulations and brought accountability to agencies and “remains focused on that important work.”

Some previous transitions have also been rancorous. Incoming Bush administration officials accused the exiting Clinton White House of minor mischief, last-minute pardons to friends and delays because of the disputed 2000 election.

Mr. Trump has long alleged that after his election, he faced a stealth effort to undermine his transition because of the investigations that were underway into his campaign’s possible connections to Russia. And there were documented instances of Obama officials making last-ditch efforts to put roadblocks in the way of what they expected would be Mr. Trump’s policy reversals on immigration and other issues.

Still, in his inauguration speech, Mr. Trump said Mr. Obama and his wife had been “magnificent” in carrying out an orderly transition and thanked them for their “gracious aid” throughout the period.

And rarely in modern times have a president and his allies been as deliberate in their desire to hobble the incoming administration as Mr. Trump has been toward Mr. Biden.

“It’s not consistent with anything we experienced,” said Denis McDonough, who served as Mr. Obama’s chief of staff and was part Mr. Obama’s team during the transition from Mr. Bush’s administration. He said Mr. Trump’s actions in the final days of his administration were foreshadowed by his determination to sever agreements Mr. Obama had reached on climate change and Iran’s nuclear program — something presidents rarely do.

“It’s a breach of that norm,” Mr. McDonough said.

Some of Mr. Trump’s actions are all but permanent, like the nomination of judges with lifetime appointments or the naming of his supporters to government panels with terms that stretch beyond Mr. Biden’s likely time in office. Once done, there is little that the new president can do to reverse them.

But they are not the only nominees administration officials are trying to rush through.

Other actions may be possible to reverse, but are designed to exact a political price for doing so.

Since the election, Mr. Trump has ordered the withdrawal of thousands of troops from Afghanistan, where Mr. Trump aims to halve an already pared-down force of 4,500 by the time he leaves office, defying the advice of some top generals.

Mr. Biden’s vision for American troop deployments is not radically different: He has said that he supports only small numbers of combat forces, mainly tasked with fighting terrorist groups like Al Qaeda and the Islamic State. But Mr. Trump’s last-minute withdrawals could force Mr. Biden into an unwanted confrontation with Democrats in Congress if he decides he needs to return to the modest, pre-election status quo.

Analysts say that Mr. Trump’s withdrawal of troops also deprives the United States of any leverage in the ongoing peace process in Afghanistan between the Taliban and the Afghan government, potentially allowing the Taliban to make important military gains.

Trump officials are also working to impose new sanctions on Iran that may be difficult for Mr. Biden to reverse, out of a fear of opening himself up to charges that he is soft on one of the country’s most dangerous adversaries.

The sanctions could also undermine any move by Mr. Biden to return to the 2015 Iran nuclear deal, a step that would require providing Iran with economic breathing room after years of Mr. Trump’s constrictions.

“I think you’re going to see a pretty rapid clip of new actions before January 20,” said Mark Dubowitz, the chief executive of the Foundation for Defense of Democracies, who often consults with the Trump administration on Iran.

In an Oval Office meeting last week, Mr. Trump also asked his senior advisers what military options were available to him in response to Iran’s stockpiling of nuclear material, although he was dissuaded from pursuing the idea. Any military action would undermine attempts by Mr. Biden to reset American policy

Similarly, Trump officials continue to take punitive actions against China that are likely to further strain the tense relationship with Beijing that Mr. Biden will inherit. Last week, Mr. Trump issued an executive order barring Americans from investing in Chinese companies with ties to China’s military. Administration officials say more steps are in the works.

Mr. Mnuchin’s shut down of emergency lending programs this week could also have long-lasting implications for Mr. Biden as the new president struggles to contain the economic fallout of the pandemic. The pandemic-era programs are run by the Fed but use Treasury money to insure against losses.

Mr. Mnuchin defended his decision on Friday, insisting that he was following the intent of Congress in calling for the Fed to return unused money to the Treasury. But it will be Mr. Biden who will be left to deal with the consequences. And restoring the programs would require new negotiations with a Congress that is already deadlocked over Covid relief.

In the summer of 2008, officials in Mr. Bush’s White House sent a memo to agency officials warning them to wrap up new regulations — and not to try to rush new ones in right before the next president. Mr. Trump is doing the opposite.

The Environmental Protection Agency is rushing to try to complete work on a new rule that will change the way the federal government counts costs and benefits, an adjustment that could make it harder for Mr. Biden to expand certain air or water pollution regulations.

At Health and Human Services, the agency moved just after Election Day to adopt a rule that would automatically suspend thousands of agency regulations if they are not individually confirmed to be “still needed” and “having appropriate impacts.” The agency itself called the plan radical — realizing it would tie the hands of the next administration.

Brian Harrison, the agency’s chief of staff, called it “the boldest and most significant regulatory reform effort ever undertaken by H.H.S.”