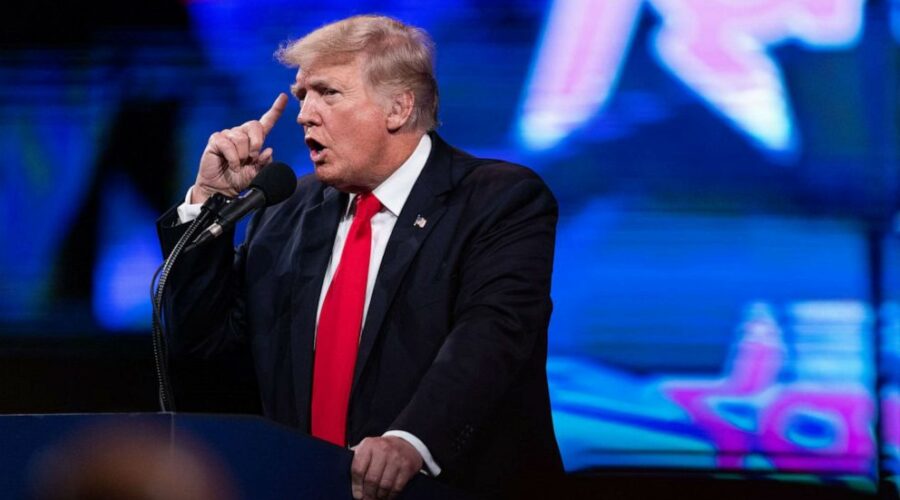 The most prominent political disruptor of his, if not any, generation isn’t done yet.

For all the hopes among leaders in both parties that former President Donald Trump would fade away — or at least see his influence slip — that’s clearly not happening. Trump is relishing the fact that he appears to remain a force who can blow up policy and political plans even without access to Twitter or Facebook.

“The Republicans again, they just don’t seem to understand at that top-level what the hell is happening,” Trump said at the Conservative Political Action Conference gathering in Dallas Sunday night.

Trump’s influence now transcends the question of whether he runs again in 2024, though he continues to say he’s made up his mind but just won’t say what he’s decided yet. He is weighing in on GOP primaries in scattershot fashion, scrambling calculations and complicating any attempts at coordination from the national or state level.

His now-steady stream of public statements has expanded to include opining against Republicans negotiating with the Biden White House. That adds a new dimension of political risk for incumbents, at a moment where President Joe Biden is close, but not quite there, on a few legislative fronts and where bipartisanship could help close the vaccination gap.

Perhaps most importantly, Trump continues to spread falsehoods and half-truths about the election he lost. Republicans who want to move on and look ahead are still being drawn backwards — while those who profess loyalty to Trump are emboldened in both what they say and how they legislate, particularly at the state level.

Trump, of course, never really went away, so it’s hard to cast any of what’s happening now as part of a comeback.

Still, the former president has been enabled by some inside his party consistently enough that he appears to have more sway over his party than his successor does over his. That’s significant enough for those in both parties to take notice, even if Trump’s megaphone isn’t what it once was.

Civil rights leaders called on Biden to use his voice, influence and power to ensure access to the ballot box for all Americans.

While Biden isn’t staying silent, it’s unclear if his current efforts will create any significant change.

Biden is slated to give remarks on voting rights in Philadelphia Tuesday. The City of Brotherly Love is just one of the areas targeted by Trump with false claims about voter fraud. Trump narrowly lost Pennsylvania to Biden in the 2020 election.

The president’s remarks coincide with moves by Republican state lawmakers to audit the 2020 election. The effort fueled, at least in part, by Trump’s continued baseless accusations.

Public pressure alone hasn’t been successful in beating back the onslaught of GOP-sponsored restrictive voting legislation.

Without all Democrats on the same page on filibuster reform, federal voting reform will likely remain in limbo while states, like Texas, move toward passing restrictive voting legislation.

The TIP with Alisa Wiersema

Less than a week after the Texas legislature gaveled into this month’s special session, both the House and the Senate versions of the Republican-backed election bills appear to be on track to reach a full floor vote this week.

This weekend’s marathon hearings over the dual bills featured testimony from citizens and advocates, including former 2020 Democratic presidential contender, Beto O’Rourke. In his remarks, O’Rourke pointed to the Jan. 6 insurrection and the advancement of the “big lie” as the catalyst for the legislation.

“Some of you are akin to the arsonist who wants to light the fire and then get credit for trying to put it out,” O’Rourke said in his testimony on Saturday.

The language included in each of the new bills — House Bill 3 and Senate Bill 1 — could change as the proposals advance through the legislative process. However, the objectives laid out in both pieces of legislation, including bans on 24-hour voting and granting more access to poll watchers, still largely echo the contentious restrictions first introduced in the failed bill SB 7 back in May.

ABC News’ “Start Here” podcast. Monday morning’s episode features ABC News Meteorologist Rob Marciano, who tells us how record heat is impacting everyday life across the country. ABC News’ Marcus Moore joins us from Haiti, where a power struggle is underway following the assassination of the country’s president. And Kayleigh Rogers from our partners at FiveThirtyEight tells us how the prospect of mass online voting is dividing elections experts. http://apple.co/2HPocUL

FiveThirtyEight’s Politics Podcast. This week marks six months since pro-Trump extremists attacked the U.S. Capitol in an effort to stop Congress from certifying the electoral votes in the 2020 election. It was an attempt to overturn a free and fair election, as the people involved in the attack wrongly believed it was not free or fair. In this installment of the FiveThirtyEight Politics podcast, technology and politics reporter Kaleigh Rogers discusses the influence of conspiracy theories on the events that led to the Jan. 6 riot, why people believe in conspiracy theories in the first place and what it means for the future of American politics. https://53eig.ht/3AGzuCk

12/07/2021 Politics Comments Off on Trump threatens further disruptions inside both parties: The Note
Markets