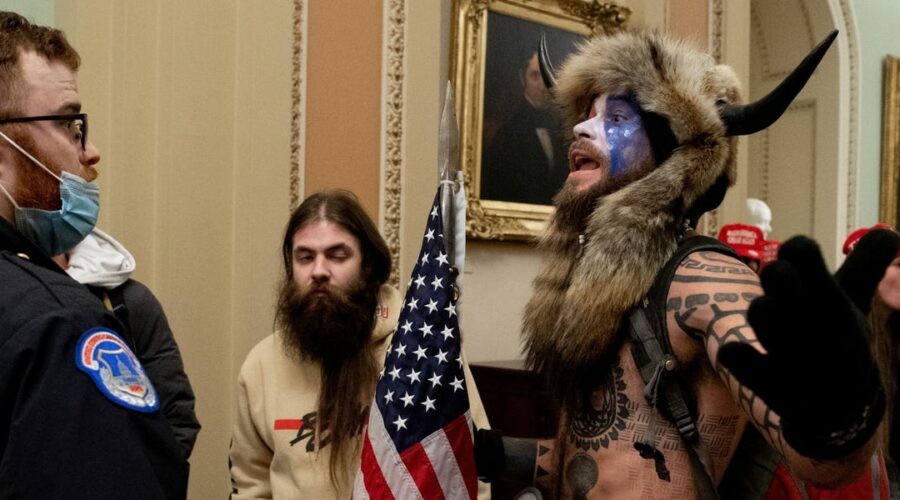 Jake Angeli is a far-right activist who loves Donald Trump and appearing in public without a shirt and posing as a viking.

On far-right social media, however, the man from Arizona — pictured with a mob of Trump supporters at the US Capitol on Wednesday — is being falsely portrayed as a supporter of a Black Lives Matter, a movement he opposes, as part of a conspiracy theory, stoked by at least one Fox News anchor, that blames the violence in Washington on anti-fascists.

"Paid actor and was at the BLM march in Arizona last year," one man claimed on Twitter.

"This 'patriot' led the way in the DC Riot," claimed the administrator of a far-right Facebook group in New Mexico.

"This guy is from Arizona. Here is a photo I took of him at the Temple BLM march in June," another woman tweeted, quoting a left-wing Arizona activist, her post retweeted some 18,000 times and receiving over 27,000 likes.

Angeli was indeed at a Black Lives Matter protest. The problem for far-right conspiracy theorists is that he was there to protest the protest. Indeed, he is a crank himself.

As the Arizona Republic reported, the 32-year-old Angeli is "a QAnon supporter who has been a fixture at Arizona right-wing political rallies over the past year." Back home, he is a fixture at the Arizona State Capitol building, "shouting about various conspiracy theories."

As Insider's Rachel E. Greenspan noted earlier in the day, that dedication has earned him the moniker, "Q Shaman." Antifa he is not.

The episode could be dismissed with a laugh, had the broader claim — that Antifa was responsible rather than the president's own supporters — not already being introduced into mainstream discourse by members of Congress, such as Rep. Matt Gaetz, who was applauded by House Republicans for his conspiratorial deflection.

Kate Starbird, an expert on disinformation at the University of Washington, explained what's coming on the far right: "They'll ask their followers to ignore what they saw with their own eyes (and some of what they experienced and perpetrated themselves)… and believe another alternative reality."