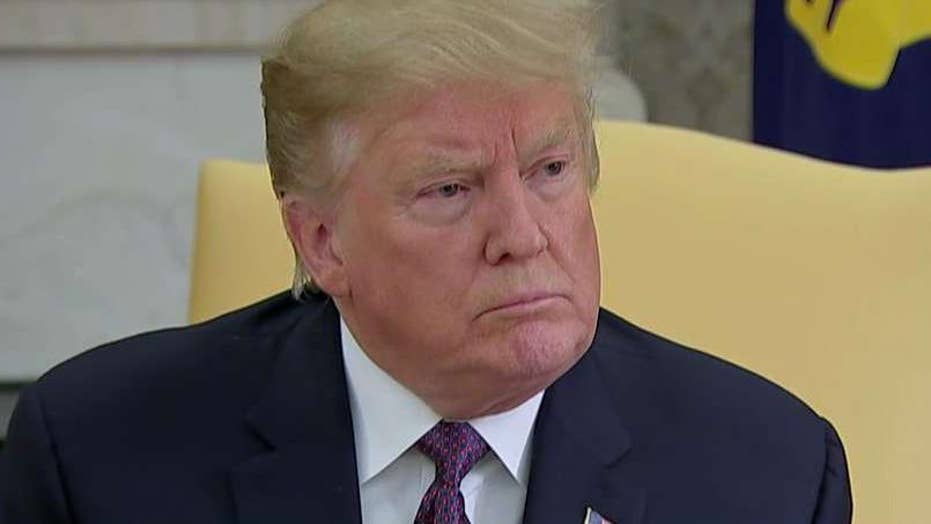 Trump: We will see what happens with Iran

President Trump on Wednesday trashed The Washington Post and The New York Times for reporting on alleged infighting within the White House over the administration’s policy in the Middle East.

Trump, in a tweet, denied that there was infighting between his staff as tensions escalate with Iran – saying that opinions may differ, but that he is the person who makes the final decisions.

“The Fake News Washington Post, and even more Fake News New York Times, are writing stories that there is infighting with respect to my strong policy in the Middle East,” Trump tweeted. “There is no infighting whatsoever.”

He added: “Different opinions are expressed and I make a decisive and final decision – it is a very simple process. All sides, views, and policies are covered. I’m sure that Iran will want to talk soon.”

Trump’s tweets come amid mounting tensions between Washington and Tehran, with the Pentagon on Wednesday ordering all nonessential government staff to leave Iraq amid still-unspecified threats that the Trump administration has linked to Iran. The recent discord between the U.S. and Iran has raised concerns among lawmakers on both sides of the aisle about a potential war with Iran, and has drawn comparisons to the lead-up to the Iraq War in 2003.

Recent days have seen allegations of sabotage targeting oil tankers off the coast of the United Arab Emirates, a drone attack by Yemen's Iranian-allied Houthi rebels and the dispatch of U.S. warships and bombers to the region.

At the root of this appears to be Trump's decision a year ago to pull the U.S. out of Iran's nuclear deal with world powers, embarking on a sanctions campaign against Tehran. In response, Iran's supreme leader issued a thinly veiled threat on Tuesday, saying it wouldn't be difficult for the Islamic Republic to enrich uranium to weapons-grade levels.

The movement of diplomatic personnel is often ordered in times of conflict, but what is driving the decisions from the White House remains unclear. A high-ranking British general said there was no new threat from Iran or its regional proxies, something immediately rebutted by the U.S. military's Central Command, which said, without elaboration, that its troops were on high alert.

Last week, U.S. officials said they had detected signs of Iranian preparations for potential attacks on U.S. forces and interests in the Middle East, but Washington has not spelled out the particulars of that threat.

Critics of the administration – and, in particular, of National Security Adviser John Bolton — have suggested that false information is being presented to make the case for war, just as George W. Bush’s administration did in 2002. Bolton, who was at the time the undersecretary of state for arms control and international security, argued falsely back then that Iraqi leader Saddam Hussein was trying to develop weapons of mass destruction.

The top Democrat on the Senate Foreign Relations Committee warned the administration on Wednesday against any action without approval from lawmakers.

"Congress has not authorized war with Iran, and the administration, if it were contemplating military action with Iran, must come to Congress to seek approval," said Sen. Bob Menendez, D-N.J., in a statement at a committee hearing.

Menendez said the Trump administration "has not provided any information to this committee on the intelligence behind their decisions or what they plan to do in Iraq or Iran." He said he has "repeatedly reminded the administration" of its responsibility to brief the committee.