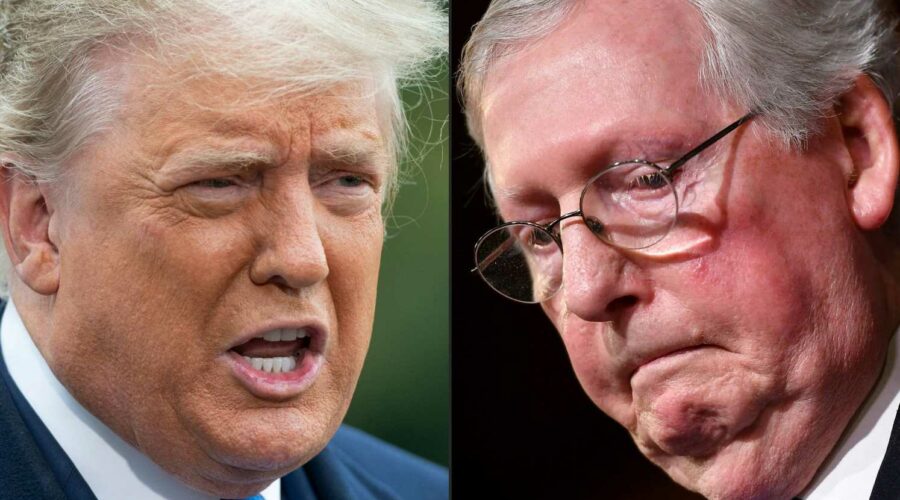 After Watergate, when Richard Nixon resigned the presidency, the nation breathed a collective sigh of relief: The system had worked. But it turns out that the system worked only because every institution stepped up to play its part. In dealing with former President Donald Trump’s abuses of power, the strong efforts by the media, the courts, the House, state and local officials, and the voters were undermined by the complete and catastrophic failure of the Senate.

Once a crown jewel of our political system, the Senate has declined for at least 30 years, since its disastrous handling of the Clarence Thomas-Anita Hill hearings. And over the past 12 years, since Senate Republicans shunned President Barack Obama’s stimulus package as America teetered on the edge of economic devastation, that decline has turned into a deep, accelerating downward spiral with no obvious bottom.

By 2016, the hyperpartisan Senate had produced gridlock, which led to an understandable loss of public confidence in government and opened the door for a narcissistic, celebrity outsider to become president. And once Trump took office, America faced the nightmare scenario: The broken Senate, devoid of bipartisanship, trust and pride, was incapable of performing the fundamental responsibility for which the Founding Fathers created it — checking a president who wanted to be a king, or at least an authoritarian.

Senate did historic harm in 2020

The failure to convict Trump for inciting the Jan. 6 insurrection to block the peaceful transfer of power, and letting it rage on, even when the lives of Vice President Mike Pence, House Speaker Nancy Pelosi and countless others were at risk, was the most shocking dereliction of the Senate’s duty. Yet it was only the most recent example of the Senate averting its eyes while Trump assaulted our democracy and failed our country.

In 2020 alone, the Republican Senate, led by Mitch McConnell, failed to remove Trump or censure him after his first impeachment trial; stood by as he minimized the impact of COVID-19, mocked masks and invited his supporters to indoor rallies; remained silent as Trump spewed lies about the election being “rigged”; failed to acknowledge Joe Biden’s presidential election win even after the electors in 50 states had voted, allowing theories of fraud and conspiracy to flourish; and moved to ram through the confirmation of Amy Coney Barrett to the Supreme Court eight days before Election Day. On Jan. 2, a dozen Senate Republicans threatened to object to the Electoral College count finalizing Biden’s victory, setting the stage for the Capitol attack four days later.

In the Senate’s 232-year history, there is no year in which it did more harm.

At the same time, seven Republican senators reminded us of the potential good that senators can do for America: Richard Burr of North Carolina, Bill Cassidy of Louisiana, Susan Collins of Maine, Lisa Murkowski of Alaska, Mitt Romney of Utah, Ben Sasse of Nebraska and Pat Toomey of Pennsylvania wrote a long overdue new chapter to John F. Kennedy’s legendary “Profiles in Courage.”

By voting to convict Trump of the most heinous act ever committed by an American president, the seven Republicans put “country first,” to borrow the late Sen. John McCain’s famous phrase. If you think it was easy, try being one of seven out of 50 in a time of enormous pressure and fierce anger. Those senators are looking at primary challenges if they’re running for reelection, censure by their state parties and, sometimes, death threats.

Thanks for the inspiration: Conservatives voting Joe Biden over Donald Trump are patriots

Yet now, America needs the seven Republicans to follow the logic of their thinking and courage to its reasonable conclusion. Do they really want to sit in twice-weekly Republican caucus lunches plotting strategy on how to thwart President Joe Biden? Do they look forward to working with Sen. Lindsey Graham, R-S.C., as he talks on Fox News about impeaching Vice President Kamala Harris as soon as the Republicans regain a House majority? Do they truly feel more simpatico with Republican Sens. Josh Hawley, Ted Cruz, Marsha Blackburn and Ron Johnson than they do with Mark Warner, Patty Murray, Joe Manchin, Dick Durbin, Amy Klobuchar and their Democratic colleagues?

A chance to repair Trump damage

Even if McConnell succeeds in his apparent desire to distance the GOP from Trump, how many of the seven GOP impeachment rebels identify with a Republican Party whose central unifying purpose, at this moment, is voter suppression?

The Gang of Seven did choose to stick with fellow Republicans this week in opposing Biden’s pandemic relief legislation. But other historic challenges are coming on issues such as ensuring the right to vote, infrastructure investment, criminal justice reform and climate change. These seven should consider leaving the Republican caucus, becoming independents and caucusing with the Democrats.

Doing so would not signify that they will agree with Biden on every issue, and in a closely divided Senate, each member will have significant influence, regardless of whether they sit on the Democratic or Republican side of the aisle.

Progress delayed: The Senate filibuster has a racist past and present. End it so America can move forward.

But these seven senators can only change American politics by realizing that they do not want to waste the coming months or years on the GOP civil war between the Trumpists and the McConnell faction, when they could be helping Biden bring our crippled country back. By voting to convict Trump in his impeachment trial, they bravely chose to separate themselves from what the Republican Party has become. When crossing a chasm on a tightrope during a storm, it is best not to stop in the middle.

Ira Shapiro, a former Senate staffer, is the author of “The Last Great Senate: Courage and Statesmanship in Times of Crisis” and “Broken: Can the Senate Save Itself and the Country?” He is writing “Betrayed,” a book about the Senate during the Trump years and the early months of the Biden presidency. Follow him on Twitter: @ShapiroGlobal

11/03/2021 Politics Comments Off on Trump impeachment Gang of 7 should ditch Republicans, work with Biden and Senate Democrats
Markets