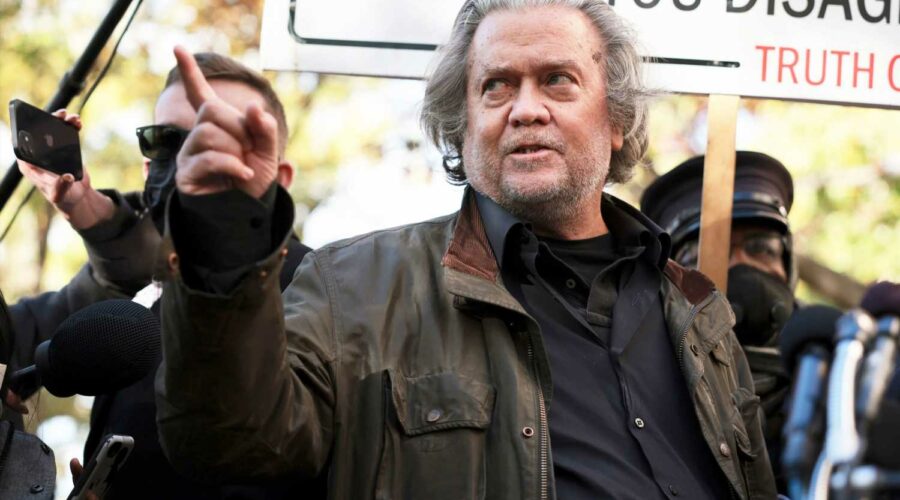 Former Trump advisor Steve Bannon on Wednesday pleaded not guilty to criminal contempt charges stemming from his refusal to comply with a subpoena from the lawmakers investigating the deadly Jan. 6 Capitol riot.

The plea entry came two days after Bannon surrendered to federal authorities and was subsequently released without bail, subject to general supervision rules including handing over his passport.

Bannon, 67, was charged Friday in U.S. District Court in Washington, D.C., with two counts of contempt of Congress after defying House investigators' demands to produce documents and sit for a deposition.

The House select committee is probing the facts and causes of the Jan. 6 invasion, when hundreds of former President Donald Trump's supporters stormed the Capitol and temporarily halted the process of transferring power to President Joe Biden.

Before surrendering Monday morning, Bannon claimed he and his allies were "taking down the Biden regime."

Each count of contempt of Congress is a misdemeanor punishable by up to one year in jail and a maximum fine of $100,000.

Bannon entered a plea of not guilty on both counts in the indictment, according to a signed court filing asking Judge Carl Nichols to waive a formal arraignment, which was scheduled as part of a hearing set for Thursday morning.

"He and we just felt there is no reason to make the Court go through the formality of an arraignment," said David Schoen, Bannon's lawyer, in an email to CNBC.

Bannon "has the indictment, has read it, and his plea is not guilty all as reflected in the pleading that was filed," Schoen wrote, adding that the move would "help make the process more efficient."

Bannon was a senior White House advisor during the first seven months of Trump's single term in office. He was fired by Trump years before the 2020 presidential election and the Jan. 6 invasion.

But in October, Bannon's lawyer told the House select committee that Bannon would not comply with its subpoena because Trump's counsel had instructed him not to produce any documents or testimony "concerning privileged material."

Committee chairman Bennie Thompson, D-Miss., rejected the reference to executive privilege, the doctrine that allows some executive branch officials to keep some communications confidential, as an argument for noncompliance with a congressional subpoena.

Bannon in 2020 had been arrested on charges of allegedly misleading donors about a supposed effort to privately fund construction of a wall on the border with Mexico. Trump pardoned Bannon just before Biden took over as president.