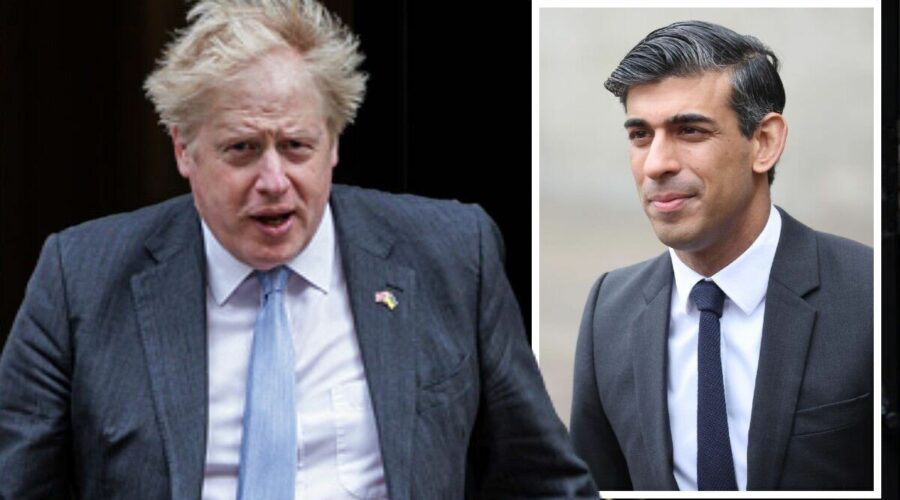 The news comes as the Prime Minister is preparing to take steps to revoke certain parts of the Northern Ireland Protocol, a deal in place with the EU since the UK left the bloc. Opinion across Northern Ireland is widely divided as Loyalist and Unionist groups oppose the notion of being a separate entity from the rest of the UK, while Nationalists and Republicans are calling for a referendum on the reunification of the island of Ireland.

The new plans will effectively see Ministers the power to tear up the post-Brexit deal with the EU, and the parameters of the Protocol.

However, sources have started to share their concerns over the emboldened plans, fearing the move could spark a major trade war with Brussels.

Senior officials in the Treasury have expressed the most concern.

One source said: “If you have a trade war that will have an impact on the economy, especially when you have an actual war going on in Europe.”

The war in Ukraine has added an extra element of worry for the Government.

With the cost of living rapidly rising in the UK, the fallout of the invasion of Ukraine is starting to have an impact both on vital food commodities such as cooking oil, but more concerning in the field of oil and gas supplies, which Russia appear to be using as a bargaining tool against Europe.

The Prime Minister has instructed his ministers to come up with plans to reduce the rising costs around the country.

On Wednesday, Mr Johnson told MPs: “There is clearly an economic cost to the Protocol.

“That is also now turning into a political problem.”

Hardcore loyalists in Northern Ireland have threatened the use of violence over the Protocol, setting fire to buses and clashing with police.

Messages have been posted at ports warning dockworkers they would be legitimate targets for facilitating customs checks between the UK and Northern Ireland.

However, many EU diplomats have quashed the Prime Ministers’ concerns over Northern Ireland as other priorities take over.

One diplomat told the FT: “We are sick of hearing of Boris’ emotional difficulties with the EU.

“There are bigger things to worry about.”

Brussels has insisted it will not be provoked into a trade war with the UK, and the bloc would remain patient over the issue.

Other EU diplomats suggested entering into a war of words with the Prime Minister now would only boost his popularity in Britain.

A source said: “We don’t want to become part of a Tory leadership contest.”

Another said: “Why should we react?” adding the plan was to hope Johnson was ousted and the bloc could build a more pragmatic relationship with his successor.

One EU official took the argument further saying the bloc had little interest in the UK.

They said of the possible repercussions of a trade war over the Northern Ireland Protocol: “Those conversations about retaliation have not happened.
“Nobody is focused on the UK.

“Since February 24 the only big thing on our plate has been Ukraine and Russia.”

Should the Prime Minister scrap the NI Protocol and trigger Article 16? Should the island of Ireland become reunited? How would a trade war affect the UK economy? Let us know what you think by CLICKING HERE and joining the discussion in our comments section below – Every Voice Matters!

EU countries are wary of inflicting further pain on their own companies and consumers already struggling with rising prices partly caused by Russia’s invasion of Ukraine.

The bloc is also hoping the US would play a role in restraining the Prime Minister over the issue surrounding Northern Ireland.

Already President Joe Biden has suggested the UK will remain at the back of the queue over a transatlantic trade deal until the conditions of the Good Friday Agreement of 1998 can be guaranteed secure following Brexit.

Lord David Frost, former Brexit secretary who negotiated the protocol, said on Wednesday it would be “entirely reasonable” for the Government to act unilaterally to override elements of the deal in domestic law.

He said the protocol was not intended to be “a permanent feature” of Britain’s relationship with the EU.

He added: “It would be entirely wrong and unwarranted to draw any conclusions about our wider attitude to international law.”