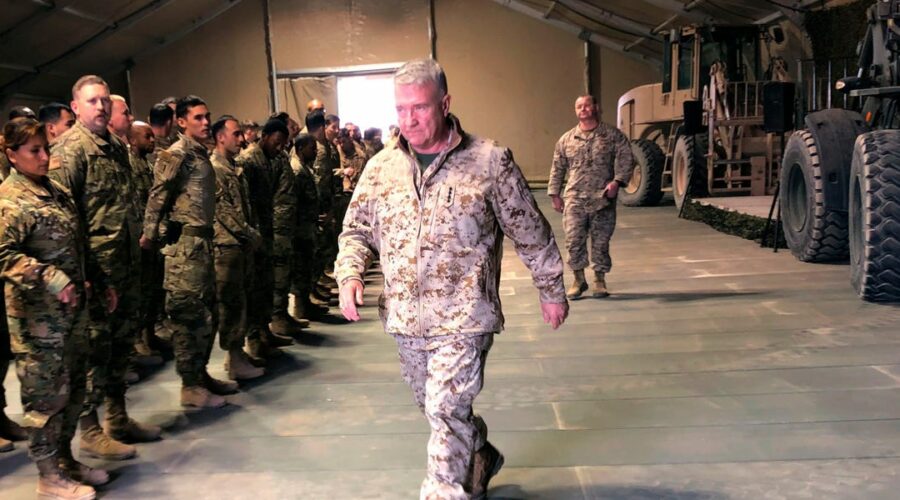 A top US general says that the evacuation of US troops at a military base in Iraq before an Iranian ballistic missile attack last year was carefully planned so that Iran would not know that roughly half the troops on base had moved out, but at least one expert says the story is a bit questionable.

Marine Gen. Kenneth “Frank” McKenzie, head of US Central Command, recently told CBS’ “60 Minutes” that “the blood of many Americans is on the hands of Qassem Soleimani.”

The general said that not only had Soleimani been connected to past attacks on US civilian and military personnel, but there was intelligence that he was preparing to strike again at the time a drone struck his convoy.

“I never take killing anyone as an easy decision,” McKenzie said, “but I think the risk of not acting in this case outweighed the risks of acting.” He said that he was “good with the decision” to kill Soleimani.

But, when Soleimani died just outside Baghdad International Airport on Jan. 3, 2020, there was no celebration because McKenzie knew what was likely to follow. “There was no backslapping, no cheering because now I have to prepare to deal with the consequences of the action,” he said.

The risks of retaliation, if not outright war, contributed to the decision of previous administrations not to kill Soleimani.

The US learned of Iranian preparations for an attack hours beforehand, with at least one intelligence assessment indicating that Iran intended to level Al Asad Airbase, but McKenzie, who was monitoring the tense situation from Tampa, Florida, did not immediately start evacuations.

“There’s a bit of an art there, how you do it,” McKenzie told “60 Minutes,” adding that “if you go to early, you risk the problem that the enemy will see what you have done and adjust his plans.”

The general acknowledged that there is a danger of not acting fast enough though. “If you move too late, you look like (the commanders) at Pearl Harbor,” he said.

The US military says that Iran was collecting commercial satellite imagery of the airbase to monitor US activity the day of the attack, “60 Minutes” reported.

McKenzie is said to have purposefully waited to evacuate troops on base and reposition aviation assets until the US military had determined that Iran had pulled its last image for the day to ensure Iran’s intelligence was outdated.

McKenzie said that the Iranians “would have seen airplanes on the ground and people working” in the satellite imagery, but when Iran fired its missiles, that was not the situation on base at all.

Around half the troops at Al Asad had been evacuated and many of the aircraft had been moved. Many of the troops that stayed behind to defend the base took up positions in hardened bunkers.

The US military recently released a new video of the attack taken by an unmanned aerial vehicle. The missiles can be seen slamming into the base one after the other. A total of 11 ballistic missiles hit Al Asad.

US troops who were on the ground thought they were going to die, according to service members who were there and have since shared their experiences, but the attack ended without loss of life.

More than 100 service members were diagnosed with traumatic brain injuries of varying severity, and 29 troops who were wounded during the attack received Purple Hearts.

Although Iran said it purposefully avoided killing US service members, McKenzie told “60 minutes” that had Al Asad Airbase not been properly evacuated, anywhere from 20 to 30 aircraft might have been destroyed and 100 to 150 Americans might have been killed.

McKenzie said that because of the intelligence Iran was relying on for the execution of the missile attack, he believes that “they expected to destroy a number of US aircraft and to kill a number of US service members.”

He argued that the timeline of the general’s story makes little sense, as there is often a significant delay between when photos are taken by commercial satellites and when they are made available, and while aircraft can sometimes, although not often, be seen at Al Asad Airbase, the resolution is not good enough to see people.

Lewis further explained that he cannot find any evidence that any commercial satellite company sold a picture of the base immediately prior to the strike. In Iranian briefings after the attack, Iran showed photos of the base from before the attack, but the satellite images were at least 11 days old.

“Generals make up stories all the time,” Lewis wrote. “I don’t know whether McKenzie made up his tall tale himself or just embellished one that was going around.”