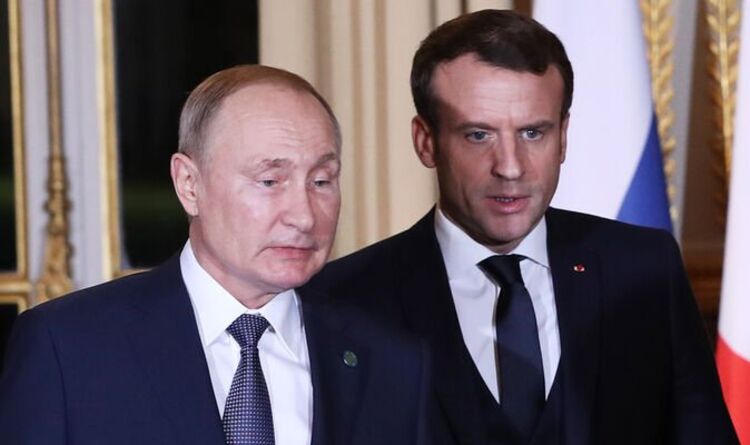 Ukraine: Macron slammed for making it ‘too easy for Putin

The Russian president was awarded the Grand Cross of the Legion of Honour in 2006 by France’s then-leader Jacques Chirac. He was granted the honour in recognition of his friendship between the two nations.

Originally established in 1802, the badge is a five-armed Maltese asterisk hung on an oak and laurel wreath, accompanied by a red ribbon.

Under French law, the honour can be revoked by the President if the recipient acts dishonourably.

Five days after Russian troops first launched an invasion of Ukraine, Conservative MPs are demanding Mr Macron use a Presidential decree to immediate action to strip the dictator of the award.

MP Saqib Bhatti said the Frenchmen had “no choice” but to act after the Kremlin started the biggest conflict in Europe since the end of World War Two.

“Putin has proven that he is nothing more than a warmongerer and I doubt the French people want their highest honour being held by a crazed dictator,” he told The Sun.

“It’s time to get serious and show Mad Vlad that he has no friends left in Europe.

“If Macron doesn’t remove Putin’s honour, then he’ll lose his own.”

Britain and the EU have imposed a series of heavy sanctions on Moscow in recent days to punish Russia for the attack on Ukraine.

It includes targeting Putin personally, along with his foreign secretary, Sergey Lavrov.

Mr Macron has failed to remove the Grand Cross of the Legion of Honour in spite of the sanctions being imposed last Friday.

The wider devastating measures imposed by the West have seen the rouble – Russia’s national currency – dropping more than 20 percent against the dollar so far this morning.

Meanwhile, the Central Bank of the Russian Federation has been forced to hike up interest rates from 9.5 percent to 20 percent.

But the sanctions mean Moscow cannot access those funds which the central banks could have used to prop up the country’s currency.

They also cannot issue new government bonds to raise fresh money because international investors are unable, or unlikely, to take on Russian debt.

The Kremlin has admitted the sanctions have “significantly changed Russia’s economic reality”.

In a statement, the Russian government added: “These are heavy sanctions, they’re problematic, but Russia has the potential to compensate the damage.”

28/02/2022 Politics Comments Off on ‘Time to get serious!’ Outrage as Macron FAILS to strip Putin of France’s highest honour
Markets