The moderates are fighting back.

After candidates spent most of the Democratic presidential debate Wednesday touting progressive policies like restrictive gun control and Medicare-for-all, one of the few centrists on the stage came out swinging.

On a question about how to address climate change, Ohio Rep. Tim Ryan said Democrats won’t be able to confront big problems like a warming planet until they win over the entire country, not just the elites in big cities.

“We have a perception problem with the Democratic party,” he said. “We are not connecting to the working-class people in the very states I represent, in Ohio, in the industrial Mid-West. We’ve lost all connection.”

Climate disease: Climate change could threaten dogs with diseases pushing into new parts of the USA

The voice of Ryan, an eight-term congressman who represents “the middle of industrial America,” kept rising.

“We’ve got to change the center of gravity of the Democratic party from being coastal, elitist and Ivy league, which is the perception to someone from the forgotten communities that have been left behind for the last 30 years,” he continued. 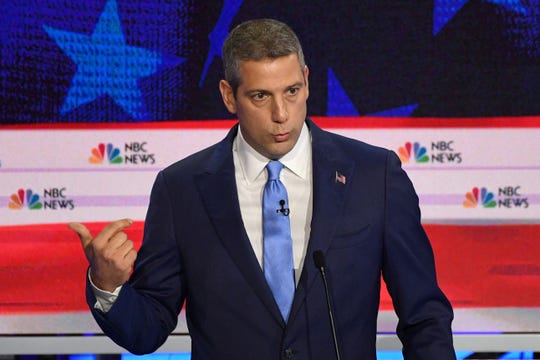 Polling at around 1 percent, Ryan’s not expected to go very far. And his on-stage flub on who were behind the 9/11 attacks won’t help.

But the larger point he’s making – that a moderate candidate is better poised than a liberal to defeat President Donald Trump in 2020 – could help determine who the party nominates next summer.