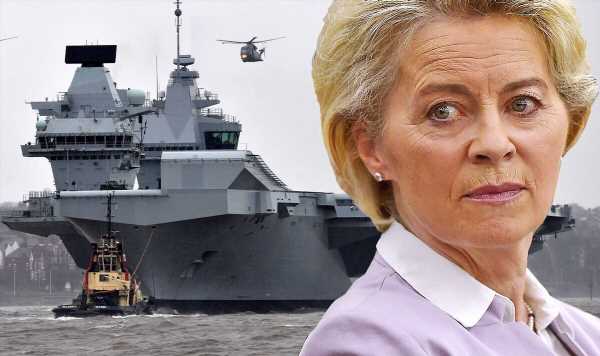 Tobias Ellwood says he backs an increase in defence spending

Professor Daniel Hodson suggested Britain continues to do “all the heavy lifting” – most recently by spearheading the continent-wide resistance to Vladimir Putin’s Russia following its invasion of Ukraine on February 24. Prof Hodson is a former director of the Vote Leave campaign, a former chief executive of London’s futures exchange, and the deputy chairman of the Campaign for an Independent Britain (CIBUK).

Prof Hodson said: “Many in the UK would like to see our defence budget increased. However, in comparison with EU countries, the UK has done all the heavy lifting. We continue to do this from the icy Arctic to the sunny Mediterranean.”

“The EU has slowly woken up to the threats on its borders, after Putin’s illegal invasion of Ukraine. The independent UK has led the way, with training, funding, and the supply of serious military hardware.”

He added: “If the EU has any serious ambitions to become a military power one day, it still has a very long way to go.”

“Yet again, the conclusion is simple: for defence, as for so much else, Europe needs Britain far more than Britain needs the EU”.

He offered his analysis after the publication of research by pro-Brexit think tank Facts4EU last week highlighting the massive contribution to defence which the Royal Navy continues to make in patrolling the continent’s seas.

In March, HMS Prince of Wales, the second of the new UK’s new aircraft carriers, took its place at the head of one of the most powerful naval task forces in the world for one of the largest Arctic military exercises in 30 years.

In total, six Royal Navy ships and 2,000 UK personnel joined vessels and troops from 26 other nations for Exercise Cold Response off the shores of Norway. A naval task force of 25 ships from 11 nations was led by HMS The Prince of Wales, serving as NATO’s command ship.

He told Express.co.uk: “Our Armed Forces are undoubtedly the best in Europe. We spend more per annum on our military than any other individual European country.”

“And, with the exception of Greece, in Europe we are the only country which meets its NATO spending commitments.”

Referring to the ongoing dispute over the Northern Ireland Protocol, Mr Habib added: “So, at this time, when the EU is suing the UK just because we wish to protect our sovereign union, it would be timely for Europe to remember that their own union relies on the UK.”

“We make our armed forces available for their defence, irrespective of the contempt with which Brussels treats us. And which country in Europe has done the most for Ukraine?”

“It is not Germany or France – these two are still cosying up to Putin. The biggest contribution by far has come from the UK. Peace in Europe is not protected by the EU – it is protected by NATO.”

“So maybe, instead of taking on the chin, as we do, the antipathy from Brussels we should threaten to remove our protective blanket? That might give them pause for thought!”

During the course of her annual State of the Union address, the former German defence minister declared: “It is time for Europe to step up to the next level.”