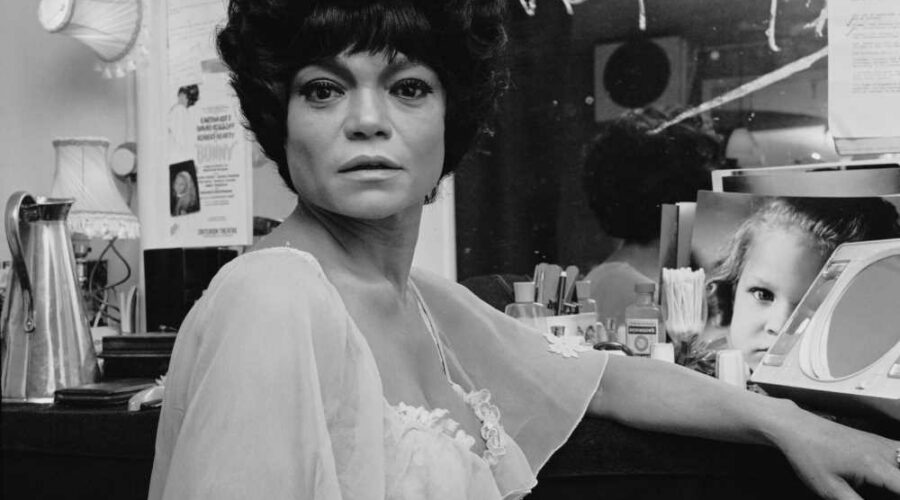 After being born into poverty, being abandoned by her mother and overcoming domestic abuse, Eartha Kitt forged an unlikely path to international fame. By 1968, the seductive cabaret singer was at the height of career — so much so, that the White House invited her to participate in a luncheon for "women to-doers."

The experience was one that shocked Washington, D.C., and derailed Kitt's career in the U.S.

As the singer's daughter, Kitt Shapiro, recounts in her new memoir, Eartha & Kitt: A Daughter's Love Story in Black & White (excerpted in this week's PEOPLE), the singer was never one to shy away from speaking her mind — even when it came to politics.

"When she was asked a question, if somebody asked her opinion, she thought you actually wanted to hear what she had to say," Shapiro says.

In her mom's view, "If you didn't want to hear what I have to say, then why did you ask me?"

So in 1968, when Kitt was invited to a White House luncheon by First Lady Lady Bird Johnson, she accepted despite having some trepidations.

In her own 1989 autobiography, Eartha Kitt: Confessions of a Sex Kitten, Kitt wrote that she thought the luncheon would be "a lot of nonsense — flowers, champagne, a chance to show off. I felt a con coming on."

She reconsidered after learning that the event, held at the height of the Vietnam War, would explore a theme of juvenile delinquency.

According to a Washington Post report shortly after the event, Kitt first spoke directly to the then-president, Lyndon B. Johnson, who made an appearance to note that he felt the behavior of children starts "in the home."

As the Post reported in 1968, Kitt then "rose and stood in front of him" and asked: "Mr. President, what do you do about delinquent parents? Those who have to work and are too busy to look after their children?"

After offering a curt response about the passage of a Social Security bill that would give "millions of dollars to day-care centers," President Johnson exited the event.

• For more on Kitt Shapiro's memories of her mom, Eartha Kitt, subscribe now to PEOPLE or pick up this week's issue, on newsstands now.

Later, when the attendees at the luncheon were asked why they felt there was "so much juvenile delinquency in the streets of America," Kitt raised her hand to respond, saying young people were protesting the war with their behavior.

"Boys I know across the nation feel it doesn't pay to be a good guy," she said, as reported by USA Today. "They figure with a record they don't have to go off to Vietnam. You send the best of this country off to be shot and maimed. They rebel in the street. They will take pot and they will get high. They don't want to go to school because they're going to be snatched off from their mothers to be shot in Vietnam."

Kitt continued, turning to the first lady: "Mrs. Johnson, you are a mother too, although you have had daughters and not sons. I am a mother, and I know the feeling of having a baby come out of my guts. I have a baby and then you send him off to war. No wonder the kids rebel and take pot. And, Mrs. Johnson, in case you don't understand the lingo: That's marijuana."

In the wake of her remarks, and the headlines they generated, Kitt's reputation suffered.

"It was a little bit surprising to her, that she saw it being made such a big deal," her daughter tells PEOPLE, adding, "She didn't intend to make a political statement that was going to change the course of her life, certainly."

Shapiro says, according to her mom, "the moment wasn't as heightened as the press made it out to be … She said it was much more matter-of-fact, that she stood up, she said her piece and she sat down."

"People knew what her opinions were. She was against the Vietnam War, although it has been talked about, how the people felt that she was anti-American. She said she was the complete opposite — she was pro-American," Kitt's daughter says. "So that's why she spoke out about it, because she just felt it was an injustice."

Soon, however, she found herself blacklisted and unable to find work in the U.S.

In 1975, The New York Times reported that President Johnson had even ordered the CIA to keep a dossier on her and had asked television and production companies not to use her, saying he didn't want to see "that woman" anywhere. Kitt herself described the fallout, telling the Post in 1978 "the government just pulled the gate on me" for her words.

"Dates simply started getting canceled," she said then. "I knew that some government investigators had come around checking. I didn't know what it was for, then. One club owner told me he was sorry, but, 'You're a problem.' "

In a 2001 interview, Kitt said "it seems that, within two hours, I was out of work in the United States," according to a dossier she later saw, which showed that she was on a CIA watch list.

She elaborated on the fallout in that interview, saying she had no idea what would come about as a result of her remarks: "I have a feeling of freedom in my country and we are on ground that says you have that freedom of speech, freedom from oppression, freedom from all sorts of oppression. I still feel that way."

Kitt's daughter says now that "she knew something had changed because dates started to change and things. She didn't have as much work in the United States. So there's this voice in the back of your head going, "What's happening? But because she had a platform internationally, those dates that fell off in the United States were picked up in Europe. So she was always working."

As for that CIA dossier, "talk about a waste of taxpayer money — it's like, really?" Shapiro says. But "on the other hand, it's like, Wow, really? This is what my own government's doing to me?"

As her daughter explains, that confidence and willingness to speak her mind is part of the icon's legacy.

"She always said, 'Make sure that what I've done doesn't die with me,' " Shapiro tells PEOPLE. "Not the songs or the roles — those will live on. She meant who she was as a person, as a mother, and what she stood for."

Eartha & Kitt is on sale now. 09/04/2021 Politics Comments Off on The Story Behind Eartha Kitt's White House Visit, Which Derailed Her U.S. Career
Markets