Only two candidates ― former Vice President Joe Biden, 76, and Sen. Bernie Sanders (I-Vt.), 77 ― have visited. Biden, who announced his run last week, delivered the first speech of his campaign to a 500-person crowd at a Teamsters union hall on Monday, and Sanders addressed a rally of 4,500 at a public park earlier this month.

Candidate travel schedules aren’t everything, but Pittsburgh as a common destination for Sanders and Biden, who are pitted against each other as ideological opponents, hints at how their campaigns are starting the race to become President Donald Trump’s 2020 opponent with similar goals.

Public polling shows the two men largely remain a head above the rest of the 20-candidate Democratic field, at least so far. Though the other candidates share the same general strategy ― “Organize and get hot at the end,” as Booker campaign manager Addisu Demissie recently put it ― Biden’s and Sanders’ leads in polling, and their impressive early fundraising, give them a different pair of early goals: Prove to a Democratic base deeply concerned with electability that you can beat Trump, and start wooing the voters you would need to do so.

Both campaigns are focused heavily on showing they can effectively court the white working-class voters who flipped from backing President Barack Obama in 2008 and 2012 to supporting Trump in 2016. They are focusing on winning back the so-called blue wall states of Pennsylvania, Wisconsin and Michigan as the way to reclaim the presidency, placing less emphasis on Democratic pickup opportunities in the more diverse Sun Belt states of North Carolina, Florida and Arizona. Pittsburgh, a city with a strong union history surrounded by counties where Trump improved on Mitt Romney’s 2012 performance, is ground zero for those efforts.

Howard Schaitberger, whose International Association of Fire Fighters union announced its support of Biden earlier Monday, opened the rally with some shots aimed at both the Democratic Party’s prior presidential nominee and at candidates like Sanders.

“He speaks to and connects to those workers who didn’t believe the last Democratic nominee heard them, cared about them and felt that their historic votes for Democratic candidates were just being taken for granted,” Schaitberger said. He ended his speech with a warning: “This may not be popular in parts of the Democratic Party, but we can’t have a nominee who is too far left. It’s just that simple. We can’t have a candidate with high-minded ideals, maybe honorable ideals, but little chance of winning.”

Biden, whose Senate record shows him repeatedly siding with financial interests, was in full populist mood in his speech, rattling off the names of unions and pledging to back them. “The country wasn’t built by Wall Street bankers, CEOs and hedge fund managers. It was built by you. It was built by the great American middle class,” he said, eschewing the “They’re not necessarily bad” qualifier he had deployed during a similar line in a speech in March.

And he pointed to Pennsylvania ― and, specifically, to portions of the swing state where large numbers of voters went from backing Obama to backing Trump ― as how he would ultimately win the presidency.

Flipping Obama-Trump voters back to the Democratic column isn’t the only way to win back states like Michigan, Pennsylvania and Wisconsin. Increases in black and millennial turnout could put those three states in the Democratic column again. But Biden didn’t visit a college campus or Philadelphia, which is 42% black, and when he laid out his plan to win the state, he didn’t mention those demographics. 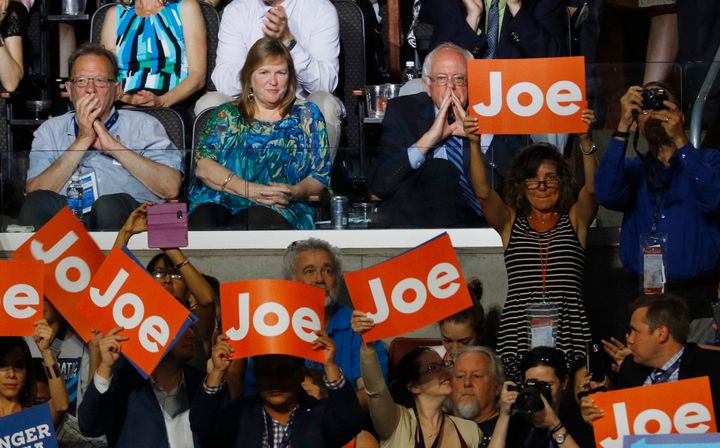 Sanders’ strategy, at least, is more reliant on turning out young people. His base is significantly younger than Biden’s. In a recent Monmouth University poll of the Democratic primary race, he led Biden 30% to 25% among voters ages 18 to 49, but he trailed 28% to 10% among voters older than 50.

This reflects, to a large extent, the ideological gap between Sanders, a Democratic socialist, and Biden’s center-left thinking. The economic agenda Biden laid out in his initial speech ― a $15 minimum wage, the elimination of occupational licensing and non-compete agreements for working-class jobs, a public option for health care, cutting out tax loopholes to slash college costs in half ― is less ambitious than Sanders’ well-known calls for “Medicare for All,” free public college and mandatory paid leave.

But the Sanders campaign has displayed a similar focus on the blue wall. The Midwest tour Sanders began in Wisconsin took him to Michigan before ending with the Pittsburgh rally and Sanders’ Fox News town hall in Bethlehem, Pennsylvania. And the campaign released internal polls last week showing Sanders topping Trump by healthy margins in all three states.

And though the other campaigns work to gain the attention of the news media and Democratic voters ― Pete Buttigieg is going on podcasts! Warren is releasing policy plan after policy plan! ― Biden and Sanders have already begun a more direct focus on tackling Trump.

Sanders has focused on Trump’s record on trade, calling on the president to scrap his plan for a renegotiation of the North American Free Trade Agreement because the new deal doesn’t provide enough protection for workers. Biden focused his campaign launch on Trump’s behavior after the 2017′s violent white supremacist protests in Charlottesville, Virginia.

Both are skipping past the primary contest, at least for now, because Democratic voters already know them, from the vice presidency and from prior presidential runs, and trust them, from either serving as Obama’s sidekick or from a relentless push for progressive goals.

“Voters know what Bernie stands for,” Ben Tulchin, the Sanders campaign pollster, told HuffPost earlier this month. “We don’t need to spend the next year telling this very progressive electorate how progressive he is.”

But the crowd in Pittsburgh was plenty familiar with Biden, breaking out into repeated “We want Joe!” chants before his introduction. “We want Joe. We need Joe,” Schaitberger roared. “We need Joe more than Joe needs to be president.”